In some provinces, like Saskatchewan, architectural technologists can design buildings 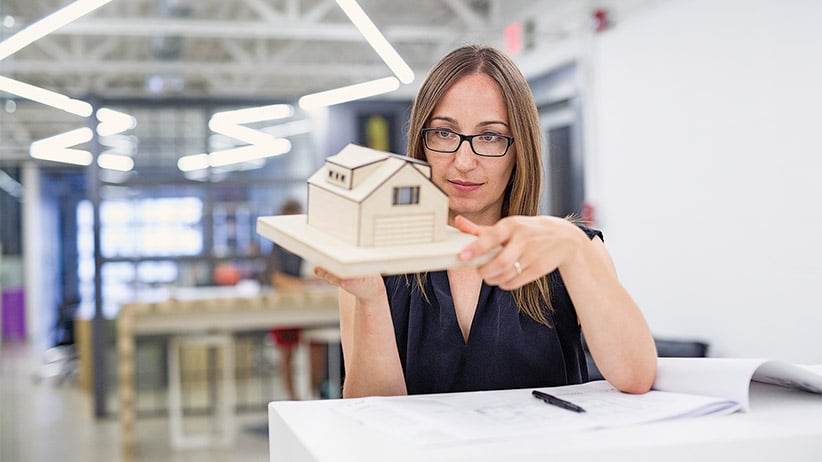 Back in the ’70s they were known merely as draftsmen: people hunched over tables using pencils and mechanical tools to churn out blueprints for architects and contractors. But an evolutionary educational process has spawned architectural technologists, endowed with skills in computer-assisted design (CAD) software, a deeper knowledge of the national building code, and more building science comprehension than ever before.

“We like to refer to ourselves as CAD monkeys,” says Crystal Bueckert, a 2008 graduate of Saskatchewan Polytechnic who started Bldg Studio Inc. in 2010 and now does about 85 projects a year, mostly designing sustainable residential inﬁll homes and small commercial buildings. She also launched a subsidiary company called Laneshed, designing and building stylish modular “sheds” that can be used as backyard studios, nap rooms or even guest rooms.

Bueckert, 39, took the three-year Architectural Technologies (Building Sciences and Interior Design) diploma program at the Moose Jaw campus. “I decided to get into a trade that could actually make me some money,” says the artist, who also has a bachelor of ﬁne arts degree from U of Sask. She decided to return to school after ﬁve years in Toronto working as a ﬁne artist and at framing jobs.

Bueckert’s brother, who was enrolled at Saskatchewan Polytechnic in Architectural Technologies, had given her a glowing review—and a warning that the program is tough and thorough.  “We try to discourage people from attending,” program head Rob Stutt jokes. “The real distinction between those who succeed and those who don’t is the degree to which they really enjoy what they are doing,” he adds.

The program, which costs about $18,700 over the three years, covers a daunting list of subjects: fundamentals of residential building materials, interpreting building codes, manual and CAD drafting methods, algebraic and geometry skills, and plenty more. Other AT programs across the country either don’t have co-op programs or have short ones, but Saskatchewan Polytechnic students must do three four-month (paid) work stints at architectural ﬁrms, construction companies, or home building ﬁrms.

Bueckert did her ﬁrst placement at a Calgary architecture ﬁrm, which— impressed by her skill set and in the middle of an Alberta building boom —offered to pay her remaining tuition.

In Saskatchewan, as in Manitoba and Alberta, architectural technologists (and regular people) can design only wooden structures three stories or less and under 6,000 sq. feet, as described in Part Nine of the National Building Code. However, technologists can design larger structures in other classiﬁcations if they get an appropriate engineer or architect stamp.

Partly that’s loyalty to the home province, admits Huard. “What we have found is the ones from the program in Moose Jaw come out with more practical experience because of the co-op program.”