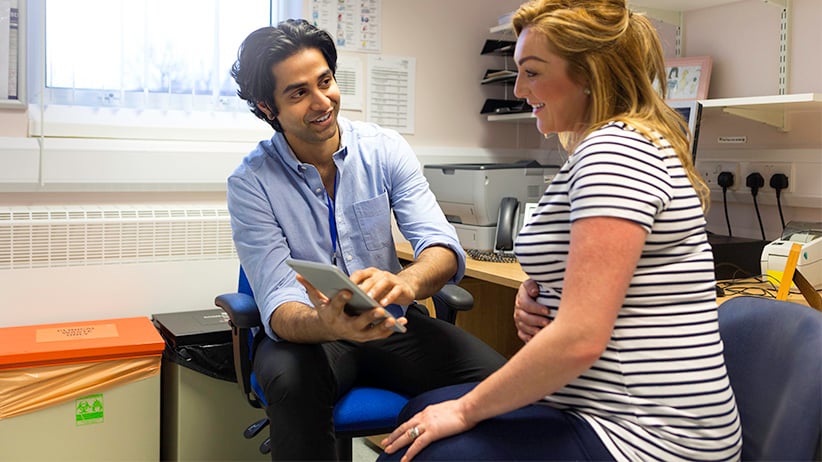 A woman and her doctor talk about test results. (SolStock/istock)

Thirteen years after scientists sequenced the human genome, we are still trying to figure out how to read it and what to do about the stories it tells. It’s clear the presence of certain genes can predict our vulnerability to disease, including cancer and birth defects. But the decisions to test for these genes and act on the results raise tough questions.

Enter the genetics counsellor: a growing profession that combines education in genetics and psychology to help guide patients through the process. “I love the genetics part of it. But the part that’s really fascinating is the counselling,” says William Pirjamali, a genetics counsellor at Thunder Bay Regional Health Sciences Centre.

Pirjamali spends much of his time counselling breast-cancer patients and those at risk about the pros and cons of being tested for genes linked to cancer, and whether to have their daughters tested. A woman who tests positive for the BRCA1 gene, for example, has a 70 to 80 per cent lifetime risk of developing breast cancer, and her daughters can inherit the gene. These conversations play a critical role.

Pirjamali landed his job after graduating with an M.Sc. in genetic counselling from McGill University this spring. It is one of four master’s programs in Canada, with others at the University of British Columbia, the University of Toronto and Université de Montréal.

Over two years, students take courses in human genetics including cytogenetics and biochemical and molecular genetics, as well as courses in counselling and psychology. Social, legal and ethical issues are also in the mix. Students get experience at clinical placements, usually in their second year.

They typically come to the program after undergraduate degrees in biology or psychology, but some apply from disciplines such as nursing. The right volunteer experience can boost a student’s chance of being accepted.

Pirjamali took a year off after his biology undergrad at Western University, but volunteered at Toronto’s Mount Sinai Hospital while working in retail. At Mount Sinai he filed paperwork, but the genetic counsellors let him sit in on some “interesting cases.”

Kirsten Bartels, a genetic counsellor at the Heart Centre at St. Paul’s Hospital in Vancouver, volunteered as a crisis-line counsellor during the last two years of her undergrad in biological sciences at Simon Fraser University. That and a university co-op placement at the B.C. Cancer Agency’s hereditary cancer program gave her the advantage she needed to get into UBC’s M.Sc. in genetic counselling in 2009. “It’s harder to get into a genetic counselling program than it is to get into medical school,” says Susan Randall Armel, assistant director of the U of T program and a senior genetic counsellor at Princess Margaret Cancer Centre in Toronto. Just 18 students are accepted each year: six to UBC, four each at the rest. But graduates are in high demand, and programs are looking to expand, says Randall Armel.

Genetic counsellors typically work in hospital-based clinical, laboratory, research and administrative positions. They also work for universities, governments and in the private sector, such as at genetic-testing companies—a burgeoning industry in the United States.

Salaries range widely depending on location, employer, and role, says Lauren Gallagher, a genetic counsellor with Newborn Screening Ontario at the Children’s Hospital of Eastern Ontario in Ottawa, and secretary of the Canadian Association of Genetic Counsellors. Starting salaries range between roughly $60,000 and $65,000 a year. More experienced genetic counsellors can earn between $100,000 and $125,000, she says.

Five years after graduation, Bartels says the program and the profession are in for significant changes as understanding of the human genome advances. Patients frequently ask her about CRISPR, a genetic-engineering technique making headlines for its potential to treat inherited diseases. But she says advances in “precision medicine”—the use of genetic testing to tailor treatment based on a patient’s particular genome—are more likely to have imminent effects. For example, some patients may carry a gene variant that causes them to metabolize a drug more quickly than other people, meaning their doctor can prescribe a lower dose.

It’s an exciting time in the field. “Our role will expand greatly,” says Bartels.

Breast-cancer risk: Testing for the BRCA1 gene raises a host of questions