Scenic, serious and well-rounded—this small school is mighty in offerings 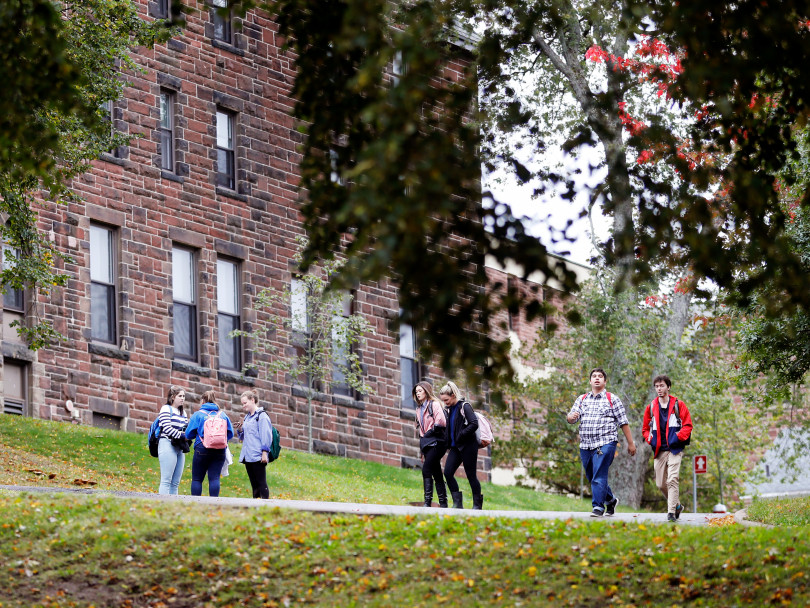 “I went to a bunch of different open houses, but as soon as I got to Mount Allison—and this is a common story for a lot of students—I just had a really good gut feeling about it,” says Claire Maguire, a fourth-year honours psychology student at Mount Allison. “It’s just such a welcoming, inclusive atmosphere. That impression held through my time here—the way it felt on Open House Day is the way it always feels.”

With small classes—ranging from an average of 60 students in first year to 14 in upper years—a picturesque setting in Sackville, N.B., and a regular outflow of Rhodes Scholars (55 as of publication time), Mount Allison ticks a lot of boxes. That’s why the school has hit the top spot in our Primarily Undergraduate category for a record 21 years since the survey began, including the past three consecutively. This year, it also tops our student satisfaction survey across all categories.

“I really love the look of the campus,” says Maguire. “It’s a lovely small town, and there’s lots of local business, which makes things feel special and homemade.” Everything on campus is within walking distance, and there’s a club for virtually every interest—a model U.N., a cappella singing, calligraphy and Shotokan karate.

In Sackville, life moves at an easy pace—with a population of about 5,000, it’s the type of town where you’re always bound to run into someone you know—but Mount Allison moves considerably faster when it comes to developing its programs and facilities. In 2019, the school conducted two major campus construction projects that cost a total of $18.8 million, supported in part by the federal and provincial governments.

One was an extensive renovation of the Gairdner Building, which used to house the fine arts program but has been re-established as a research facility for climate change, health, and environmental sciences. Mount Allison also renovated its Barclay Building—home of the chemistry and biochemistry departments—making research spaces more accessible.

In 2019, the university also started offering a new minor degree in museum and curatorial studies—the first of its kind in Atlantic Canada at the undergraduate level. The program saw its first graduate in the spring of 2019, Runa Nishiyama of Tokyo, Japan, who has gone on to do her master’s degree in art business at Sotheby’s Art Institute in London.

Mount Allison also introduced several new certificate programs in 2019, including biopsychology, social research methodologies, visual literacy and culture, and diversity, equity, and inclusion. Students can take certificate programs in tandem with their degree, and certificates are open to all students, regardless of their program of study. They’re a terrific way for students to enhance knowledge in their area of focus, or to expand their horizons by studying something new and unrelated to their primary degree.

Students at Mount Allison tend to develop close relationships with their professors. “I’m someone who likes to participate and get to know the professor, and at Mount Allison, you get a lot of personal attention,” says Maguire. “Your professors will actually help you with your homework if you show up to office hours.”

“You’re not just a number. Your professors really care about what you’re learning, and make an effort to get to know you,” says Jonathan Harvey, a fifth-year commerce student. “Being close to my professors helped me be unintimidated to ask questions while taking my courses, so at my internship, I felt like my understanding was more developed than it would have been at a larger school.”

Over the summer of 2019, Harvey worked as a commercial investment intern at Emera, an energy company in Halifax. He came by this opportunity through Mount Allison’s Office of Experiential Learning and Career Development, which opened in 2018. The office runs professional development workshops, offers career counselling, and helps propel students toward internship and funding opportunities.

Jonathan Ferguson, a fourth-year international relations student, says the experiential learning office was crucial to helping him find his 2019 summer internship at Community Forests International (CFI), the Canadian headquarters of an international environmental charity. In the course of his work, he attended a United Nations conference in New York City and was there for a speech by the Secretary-General. “The experiential learning office at Mount Allison has so far exceeded all my expectations,” said Ferguson. “I’ve been blown away by how organized, connected and ambitious this office is.”

Individualized support for career development is just one highlight of being a Mount Allison student; a wealth of opportunities to pursue research is another. Many students undertake research projects with their professors, which can culminate in co-publishing articles—a serious boon for those looking to pursue graduate school.

Maguire hopes to pursue graduate studies in speech pathology, Harvey is looking at applying to accounting schools, and Ferguson wants to do a master’s in environmental studies or international security. Mount Allison may be small, but it opens immense opportunities for its students.