After months of planning, Fort McMurray's only college reopens

The smoke and soot are gone, but the memory of the great fire lingers 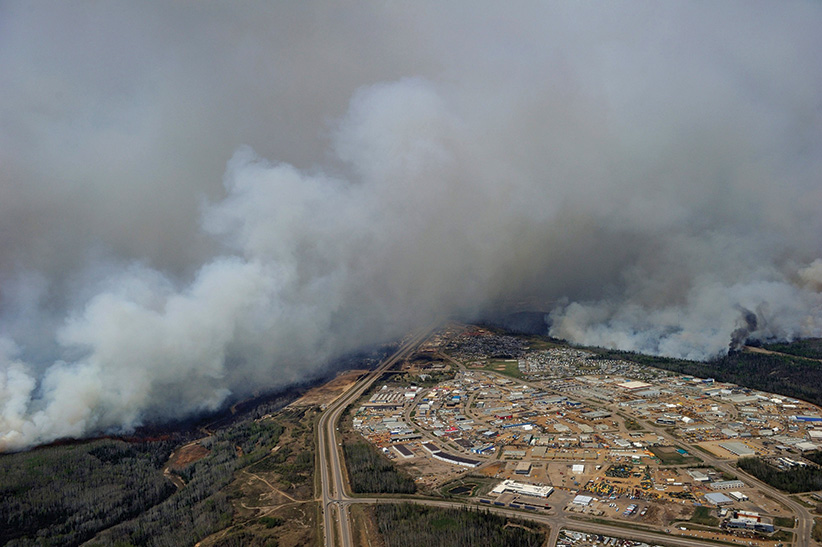 After the fire: Some people quit and left town, but those who stuck by Keyano are helping students heal

The scars left by the Fort McMurray wildfire don’t show up on the walls of Keyano College, or the trees immediately surrounding it. Nothing burned on campus, and after months of scrubbing and smoke-damage remediation, the school looked perfectly normal in time for student orientation and first classes the day after Labour Day.

The signs have shown up in more subtle ways, and with surprising frequency, in the office of Ryan Cox, an English and film studies instructor. Four weeks in, he had more students crying at his desk than he would normally have in a full school year.

“What would make them anxious anyway has been heightened,” he says. “They’re overreacting to assignments: ‘I can’t do this.’ There’s a degree of panic. For some, it’s kind of immobilizing.”

It’s hard for everyone, Cox included, to escape the trauma of the May 3 fire. It destroyed one-tenth of the homes in the northeast Alberta oil sands capital, and turned McMurray’s entire population of 80,000 into frantic evacuees who were kept away from home for a month. Cox entered autumn still suffering from insomnia; his wife would get uneasy when the neighbours were barbecuing late at night.

Acutely aware of the need to hold it together in front of his students—some of whom lost homes to the flames and haven’t yet rebuilt—the instructor instead writes and thinks about the experience and its civic impacts. He’s been preparing a talk for part of Keyano’s public lecture series, which touches on the proliferation of the “Fort McMurray strong” slogan.

“There’s this desire for strength and certainty in the community, and I think there’s a degree of performance associated with it,” Cox says.

It took a combination of performance, improvisation, speed and grunt work to bring back Fort Mac’s only college in time for the 2016-17 school year. The campus buildings and the downtown around it were spared fire damage, but a shuttered city meant administrators had to promptly cancel the 600-student spring semester, scheduled to start a week after the inferno.

That second week, vice-president of facilities operation Henry Hunter got special access to survey the recovery work. Smoke damage was extensive. Keyano called in 300 relief workers to scrub down every wall, ceiling and surface; replace all ceiling tiles and corridor insulation; and remove every refrigerator in residences, office lunchrooms and science labs, as many had long stretches without electricity and much food was spoiled. He had to manage all that around the field hospital set up for much of the summer at the Keyano sports complex, and the city’s other recovery teams that used its industrial campus and some residences through mid-August.

Recovery costs are estimated at $15 million, Hunter says. Most of those losses are likely insurable, which is a relief for a college that had to lay off staff and cut its hockey program amid the oil sands sector’s sharp downturn.

Repopulating the college brought other challenges. About five per cent of staff members lost their homes to fire, and more were displaced for months because of safety restrictions, which meant the school had to open some of its residence spaces for staff. Some Keyano employees chose to call it quits after the fire, leaving the school short-staffed, says academic vice-president Peter Lawlor. College leaders also expected a large decrease in student enrolments, and were 20 per cent behind last year’s pace heading into August. They wound up only six per cent behind. “I think the students wanted to come back to where they started,” Lawlor says.

Momin Syed had planned to leave home and start his undergraduate degree at University of Lethbridge, but nixed those plans. “You’re in the rebuilding phase, so why not support the city that’s been with you for the majority of your life?” the first-year Keyano student says.

Most Keyano students are from Fort Mac. Fire cut short Grade 12 year two months early, so college instructors are having to help new students catch up. Syed says he’s learning anew about organic chemistry, something his high school teacher had barely begun to go through the week fire swept everyone from town.

Syed passes by charred forests every day on his way to Keyano, so he’s visited by those memories often. But he’s aware others have it worse, and joined the student association’s mental health committee so he could help.

“Right now, people are just confiding in themselves, but they need to realize that we were all a part of it and we can help,” Syed says. “You kind of need to be that light in the darkness for them.”

He joined the national anti-stigma Elephant in the Room campaign, dressing up in an elephant costume and encouraging fellow students to anonymously tell him their fears and emotions. It’s a new twist on a confession booth, at a college where everyone’s reaching for their own solutions.