As automation increases, so will the demand for this job

The move to automation is inevitable, but many human hands—and brains—are needed to make those robots run. Enter the automation technician. Here are the colleges offering a way in to this lucrative career. 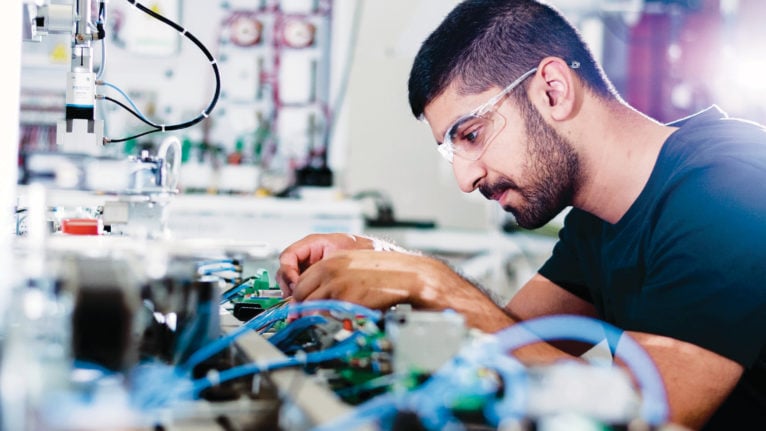 Automation is often discussed in alarmist terms—at least, when it comes to employment. A headline-grabbing 2018 RBC report found that at least half of Canadian jobs will be impacted, if not altogether eliminated, by automation.

But the report also suggested that skills that machines are not (yet, at least) adapted to will become increasingly valuable in the job market—namely things like complex problem-solving, critical thinking and social perceptiveness. And it just so happens that all those skills fit neatly into the job description for automation technicians. Becoming one of the relatively few professionals who know how to build and repair automated systems is one good way to stay ahead of this seemingly unstoppable wave.

When you hear the word automation, you may visualize a robot arm on a manufacturing line, sorting items or putting car parts together. You’d be partially right, but that’s far from the full picture. Automation is essentially the use of technology to complete a task with minimal human interference, and while that may include robots, it also applies to software running on other types of machines, from smart lights to control systems inside self-driving cars. And it’s working its way into industries beyond manufacturing, including health care, mining and law enforcement, all of which need more people who know what they’re doing.

READ: How Canadian colleges rose to the challenges of the COVID-19 pandemic

Specifically, they need specialists who have the hands-on skills to operate and repair automated machinery alongside some understanding of the programming languages that run them. The best part? You don’t need an engineering degree to join this rapidly growing field. Thanks to strong employer demand, college-level programs that provide this particular combination of skills are popping up all over the country, and grads can expect to make between $50,000-$90,000 per year, depending on geography, industry and experience.

“I’ve always liked tinkering with machinery,” says Alex Dunn, an industrial automation integrator at PowerOn Control Systems, which specializes in custom automation systems for companies in industries ranging from water treatment to packaging and metal processing. “My favourite part of the job is the satisfaction,” he says. “When you walk away from a frustrating problem you’ve been working on for days and everything starts running as it should, it feels really good.”

Dunn graduated from Sheridan College’s three-year electromechanical engineering technician program, which focuses on automation. “It’s a key element of what we call Industry 4.0, or the fourth industrial revolution,” says Amjed Majeed, dean of Sheridan’s school of mechanical and electrical engineering technology. “When you apply automation to industry, you increase productivity and accuracy, as well as safety.” The college is currently developing a degree-level program in automation and robotics to be launched in 2023. Kwantlen Polytechnic, Cambrian, Centennial, Conestoga and Algonquin colleges have also opened automation programs, a wave that’s largely been driven by industry requests. These programs are fairly new; most have been launched in the past five years.

Many grads from college diploma programs work on the operations and repair side of the equation, rather than design, which is often handled by engineers. That’s not a hard and fast rule, though. “We have designers who have come out of universities and colleges. We don’t discriminate,” says Andre Dumais, president of Ionic Mechatronics, which specializes in industrial automation. “Mechatronics” is a term worth noting—it refers to an interdisciplinary field that involves electrical and mechanical systems, robotics and computing.

READ: In a climate-anxious world, these colleges are training students to fight back

Dumais is keen to hire college grads because of their hands-on training. “The college grad is typically a tactical, practical person,” he says. The Ionic Technology Group set up an annual $1,500 scholarship program for Cambrian’s mechatronics program, in honour of Steve Matusch, the company’s late founder. “College grads tend to have more experience with programming and robotics, whereas that’s typically a small part of university programs.”

Since automation exists at the intersection of electronics, mechanics and programming and spans a huge (and growing) variety of industries, people who work in the field are interdisciplinarians by nature. “You have to have a good knowledge of electrical fundamentals and mechanical systems, but you also have to be able to think on your feet and respond to customer needs,” says Werner Scherzinger, a professor in Cambrian’s mechatronics program. High tolerance for stress doesn’t hurt either. “I don’t do much physical labour,” says Dunn. “But there are a lot of long hours, and at the end of the day, if something’s not running and you’ve got a bunch of eyeballs on you that are like, ‘Okay, every second this isn’t working is catastrophic for us’—you have to be able to deal with that.”

Good news if you get bored easily, though: novelty is a big part of the job. “There’s so much learning and relearning, so many different parts to work with,” says Dunn. “It feels like you’re always being pushed to work with something you’ve never worked with, and you’ve got to figure it out quickly. It really comes down to persistence.”

This article appears in print in the Maclean’s 2020 Canadian Colleges Guidebook with the headline, “Rage not against the machine.”  Subscribe to the monthly print magazine here.