BCIT: Home of the Canadian XPRIZE team trying to land a rover on the moon

The Google Lunar XPRIZE challenges teams—like the Dobrianski family, the only Canadian entrants—to send a rover to the moon and back for a $30-million prize 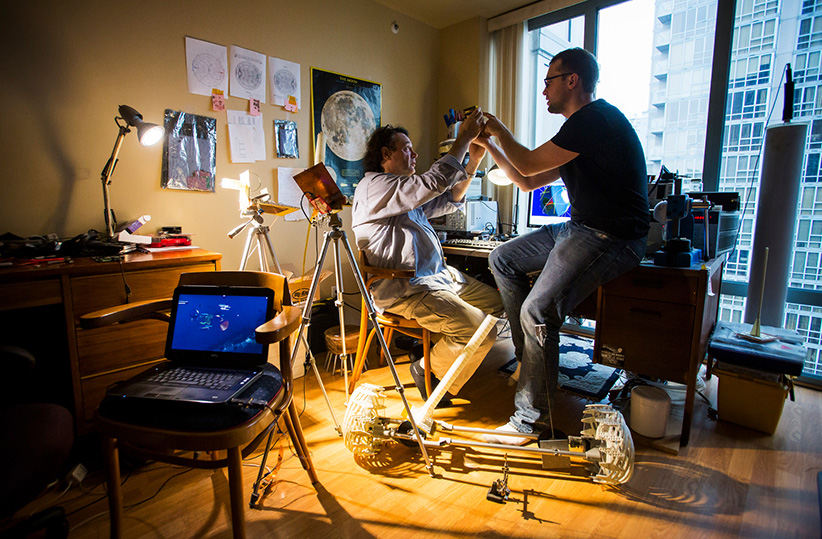 Alongside his sons Sergei and Andrei, Dobrianski is at the helm of a project to land a rover on the moon as part of the Google Lunar XPRIZE contest, and the British Columbia Institute of Technology serves as the staging ground for their audacious goals.

Sixteen international teams remain in a field that’s been pared down from 29. The Dobrianski-led Plan B team is the lone Canadian entry vying for the $30-million prize. “It is a challenge, and I like challenges,” the 57-year-old Vancouver resident says. “I wake up every morning, look back at what yesterday’s failure was then decide how I can fix it. This has been my life for the past five years, including weekends and vacations.”

The XPRIZE was initiated in 2007. To win it, privately funded participants must land a rover on the moon, make it travel 500 m and transmit high-definition video and images back to Earth before the end of 2017. A documentary web series produced by filmmaker and writer J.J. Abrams covers each team’s quest, including that of the Dobrianskis.

What started in Dobrianski’s apartment in 2010 became a full-scale production at the BCIT Centre for Applied Research and Innovation in Burnaby in mid-2016. The 10,000-sq.-foot facility encompasses a suite of services for engineering, design, fabrication and electronics. It’s used by students, industry and the community to see ideas through from concept to completion in the engineering, manufacturing and medical sectors, among others. The Dobrianskis signed a facilities agreement with BCIT that provides a full-time home for their space odyssey well into 2017.

It’s a homecoming of sorts for the Dobrianski boys: Sergei, 29, is a BCIT computer systems technology grad, while Andrei, 34, has a diploma in computer engineering. Sergei heads up the systems, programming and electronics of the Plan B project; Andrei covers off the insurance, contractual and managerial ends.

The team boasts a core of 10 members, though about 50 people have had a hand in it along the way, including seven BCIT alumni who have offered their services for free. “The types of numbers [money] we are talking about for the team are pretty astronomical to get a vehicle into space,” says Nigel Halsted, head of BCIT’s product and process applied research team.

Dobrianski’s ties to space and computing go back decades. Born in Donetsk in the late 1950s, he grew up during the height of the Soviet-era space race. He studied computer science and math in Ukraine and worked in software before moving to Canada in 1995.

Dobrianski believed the contest parameters weren’t possible until he read Soviet rocket designer Boris Chertok’s memoir, Rockets and People. The series consists of four books, which Dobrianski read four times before he began developing blueprints. That epiphany led the Dobrianskis to enter the contest less than a week before the Dec. 31, 2010, deadline to register. Dobrianski then applied for a $50,000 loan to cover the entry fee.“The lady in the bank was pretty wide-eyed when I told her I wanted the money to put a rover on the moon,” he says.

Plan B’s expenditures are expected to end up somewhere between $2.5 million and $10 million. The Dobrianski family has invested more than $250,000 and leaned on volunteer aviation experts, machinists, mathematicians, physicists and private financial backers. Sergei estimates close to 25,000 volunteer hours have been logged since 2011. “It’s like starting a business when there isn’t a demand yet,” Sergei says. “But it’s fun. I wouldn’t change this for anything.”

The latest addition to the team is Saf Dewji. The 28-year-old BCIT mechanical engineering student was selected to join Plan B in a marketing role as part of a college contest. He will seek private investors and initiate a crowdfunding campaign. “It definitely was daunting at first,” Dewji says. “At the same time, it’s a pretty easy sell: I’m asking people to help the only Canadian team get to the moon.”

The team must secure a launch site before the end of 2016 to remain in the contest, so the team is exploring options in the U.S., Europe and Asia. Even if they don’t make it, the project has changed Sergei’s business focus from software to space. “The lunar surface is really the next stage,” he says, adding that all eyes are on the next prize. “It’s a stepping stone and a staging point for missions to Mars and opens doors to the rest of our solar system.”