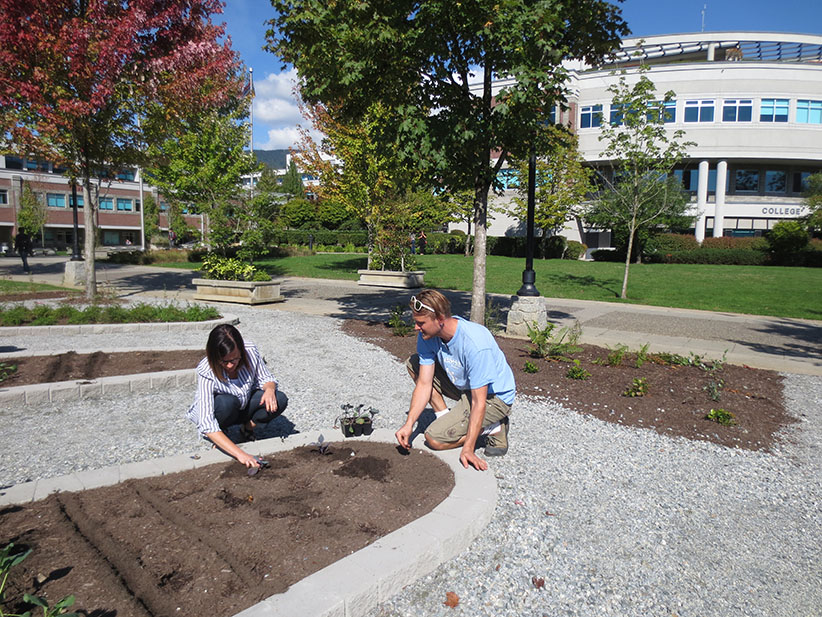 Home sweet home: Sweet alyssum was found to be the plant of choice for beneficial bugs

People aren’t usually fans of bugs—not in their houses, not in their rooms and certainly not in their beds. So it stands to reason they don’t want them scurrying under their feet in their gardens, either.

The User Network for Insects in the Urban Garden, or UNIBUG, is trying to convince you otherwise. This citizen-science research project, which has been around since 2010, is based at Douglas College’s Institute for Urban Ecology (IUE) in New Westminster, B.C. It invites community volunteers to get involved in research on beneficial insects—the ones that do helpful things, rather than just freaking you out.

The last UNIBUG research project, which ran from 2011 to 2015, involved “biological control”: defending gardens using beetles and parasitic wasps that eat pests, instead of just hosing them down with pesticides. Veronica Wahl, IUE coordinator, thinks the volunteers loved the idea because “they’re gardeners, they’re really excited about not having to use chemical pesticides in the garden.”

The researchers investigated which plants are attractive to the little critters. It turns out that both white yarrow and sweet alyssum are held in high regard by ground beetles and flying parasitic wasps; ground beetles, which love feasting on garden pests like slugs, grubs and aphids, took a particular fancy to sweet alyssum, too, which makes for a nice beetle home. Or, as Robert McGregor, executive director of the Institute of Urban Ecology, puts it, “Sweet alyssum is sort of the Starbucks of the insect world.”

The volunteers measured appeal with pitfall traps made from simple plastic cups dug into the ground. The beetles plunge into the tiny prisons, where they are counted by volunteers. If there are more captured when the plant is around than when it’s not, then they know the plant is bringing all the boys to the yard.
UNIBUG has now shifted its focus to monitoring native pollinators such as bees, which, along with hummingbirds and butterflies, help pollinate a third of the world’s crops.

Luckily, UNIBUG seems to have no shortage of volunteers to lend a hand: “Our volunteer base grew from 30 people in the first year up to well over 400 in the past couple of years,” says McGregor.

There’s a ton of community members who might never have found each other if not for the UNIBUG project. McGregor and Wahl were told stories by volunteers about how they’d previously admired gardens they’d seen in their neighbourhood, only to discover after joining the project that they were owned by fellow citizen scientists.
As for the future, McGregor is hopeful, despite the slippery nature of funding for citizen-science projects. “We’ve managed to keep this rolling. We’re in year six now, and we’ve established a new demonstration garden,” he says. “We expect to keep increasing the number of things we address.”

Though they don’t have the resources for it yet, McGregor says there’s been interest around B.C. in establishing satellite UNIBUG groups. Meanwhile, Wahl is gauging interest from other groups in the region who monitor native pollinators to see if they’re willing to join a Regional Pollinators Allies Network to share information and ideas.

Besides the citizen-science project, the Institute of Urban Ecology provides environmental education in public schools around Vancouver, says McGregor. Plus, IUE hires students from Douglas College, with the hope that sustainable gardening in urban environments is practised among future generations.

So the next time you go to stomp on a bug crawling across your carpet, consider if it belongs in your garden instead.