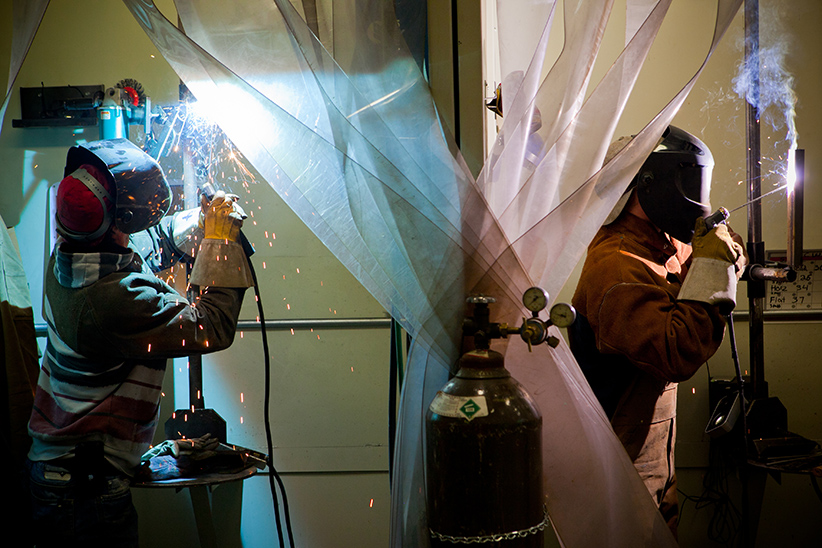 Carrying a torch: Students learn real-life skills creating furniture, like making a park bench out of a truck tailgate

Since he graduated in 2014 from the pre-employment welding certificate program at Great Plains College (GPC), Hittel always donates a piece of metal art to the program’s annual fundraising auction. In the past, he has crafted a park bench out of a truck tailgate and made a Team Canada coffee table.

But Hittel says the students, who design and build their own pieces for the event, keep getting better. “They’re ramping up the calibre this year, so I’ve gotta keep up with those guys.”

Great Plains’ annual Carhartts & Caviar auction began four years ago under the eye of welding instructor Jared McKenzie, who has taught at GPC since 2008. Initially, the welding showcase was designed to raise money for new equipment for the 12-student program, but has since become a can’t-miss community affair in Swift Current, Sask., which has a population of about 15,000.

“In a town the size of Swift Current, we will have 200 people show up in the gym for this auction,” says David Keast, the college’s president and CEO.

It’s also become an invaluable teaching tool for McKenzie, who, along with his students, spends part of the year creating unique metal art, from a full dining-room set to freestanding porch swings. Twelve pieces were auctioned off this past February. The top earning piece at the event, themed “the Softer Side of Steel,” was a dining table, which sold for $2,400.

“They love it,” McKenzie says of his students. “It gets them out of their traditional welding booths. It’s become way more than financial now for us.”

Using oxyacetylene equipment, the students learn to grind and blend welds properly, which is especially important when working on artistic projects, Hittel says.

The students deal with distortion and how heat will warp metal. They also create budgets and planning materials for their projects.

The showcase has raised more than $60,000 for the eight-month program, with much of the proceeds now going toward scholarships for welding students.

Hittel, who is now employed at Wheatland Machine Shop, a steel fabricator in Swift Current, says working on a piece in the auction was the best way to get his name out into the industry.

“I never even need my resumé,” Hittel says. “I only need to go by Jared’s name. All the companies in town just take Jared at his word that these kids are going to be good and they go with that.”

GPC’s small class size means welding students get a lot of one-on-one time with McKenzie, who won the 2015 Colleges and Institutes Canada Award of Excellence in teaching.

“It’s a huge advantage, because if you’re having problems with a weld and there’s 30 other people in there, there’s not much instruction going on,” Hittel says.

“But when there’s only 12 of us, Jared can give you all kinds of help.”

Both Hittel and McKenzie acknowledge that coffee tables, water fountains and abstract art aren’t necessarily what first comes to mind when thinking about welding.

But, McKenzie says, “Even though it’s art, all the skills involved tie into real-life skills, whether they’re working in a fab shop or a structural shop or on site. It teaches them so much above and beyond just creating a fun art piece.” It also gives students a chance to think about different career paths within welding, he adds.

McKenzie is overrun each year with former students and community members wanting to help out with the auction. “You’ve got all these young kids that are out working every day and then coming back to their educational institutions to volunteer just to give back and be a part of the event every year,” he says.