Alex Villeneuve sterilizes spent grain from brewers, grows mushrooms in it, and hopes to feed it to cattle 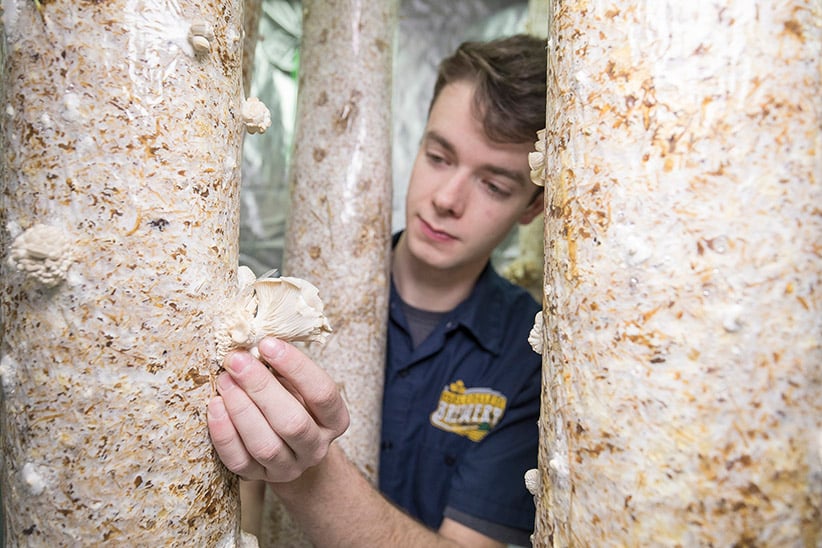 Enviro-prodigy: The mushroom business could divert thousands of pounds of organics from the landfill

Before he could legally drink in Canada, Alex Villeneuve brewed his first beer. Growing the herbs and roots on the greenhouse rooftop of his high school, Villeneuve fermented a prize-winning rosemary ginger beer and was declared a first-place winner of Edmonton’s First Official Winter Drink contest, run by the city. Lucky enough to attend a high school with a culinary arts program, he already had three years of training under his belt when he enrolled in the Northern Alberta Institute of Technology’s apprenticeship cooking program. Ever the prodigy, on weekends he was running successful pop-up restaurants. In his second year as a chef apprentice, he decided to enrol in the two-year brewmaster and brewery operations management diploma program at Olds College, 200 km away, which is where his two worlds collided.

One day, not long after he arrived in 2015, he was eyeing a pile of spent grain left over after the sugars are extracted during the fermenting process. Brewers not only want to dispose of it, but ditch it fast, because bacteria begin to work on the grain and, after a couple of days, cause an awful stink. “Why are we throwing this away?” he remembers asking a professor. He was directed to microbiologist Paul Tiege, a research scientist in the Olds College Centre for Innovation (OCCI), who encouraged Villeneuve to run nutritional tests on the spent grain. “Alex spotted an opportunity . . . actually, several opportunities . . . where others see a liability,” says Tiege, who worked alongside Villeneuve on his research. “He fleshed out his idea, developed a research plan and decided to turn the idea into a business.”

Tiege says it was fortuitous timing, as the innovation centre had created an incubator fund in 2015 of up to $5,000 to ensure “innovative ideas do not get stuck in the development phase.” Villeneuve’s idea was greenlighted, and he began testing.

At OCCI, Tiege says students have formal and informal meetings with researchers and faculty, and an introduction to a regional innovation network where they can make contacts with local businesses, sources of funding and government officials. “The primary mandate of the OCCI is education, naturally, but included in our mandate is applied research and, importantly, meeting our outcomes through innovative partnerships.”

Craft brewers use more than 20 litres of water and almost a third of a pound of grain to make one litre of beer and up to 85 per cent of the spent wheat or barley gets carted off to the landfill. It’s not a very environmentally friendly process, and Villeneueve wanted to remedy the waste-management part of the problem. “The disposal options currently available to them are either expensive, inconsistent or environmentally insensitive,” he says.

Now he’s running his own sustainable waste-removal company, Ceres Solutions Ltd., named after the Roman goddess of grain. He figured out a way to pasteurize the spent grain with hot water, sterilizing it so no bacteria could grow. Next he injected the sterilized substrate with mycelium, the “roots” of mushrooms. The mycelium-inoculated grain produced what Villeneuve calls “a dishearteningly small amount of mushrooms”—about 500 grams of oyster and lion’s mane. When he analyzed the substrate after inoculation, he found that its protein content had been boosted by the mycelium, which breaks down complex fibres in the spent grain. “Not only am I able to produce high-quality mushrooms that can be sold to local restaurants and farmers’ markets, but the protein-enriched grains left over from brewing byproducts have promising potential to be used as [food for livestock],” he says.

Now set up in a warehouse on the Olds campus, a two-hour drive from his home in Edmonton, he trucks up to 100 kg of spent grain there every week. His grandfather and his father were driving to Olds every weekend to help him with the pasteurization process, but, spurred by their insistence that he find a better way, the three of them have come up with a small-scale system that does the dirty work, which has doubled the amount of grain they can process. Villeneuve can now produce almost five kilograms of mushrooms every two weeks, selling to local restaurants and markets for anywhere from $30 for fresh mushrooms to as much as $127 per kilogram for dried.

In 2016, he won the Alberta Innovates VenturePrize Student award and $20,000 for his business concept, money he will use to buy equipment to control and regulate temperature, humidity, air, water and light, as well as make improvements to his dewatering process. It has given him “the incredible opportunity to grow my business at a rate” he never thought possible.

Now in his final year at Olds, after graduation he will head back to NAIT for his final technical training session needed to get his chef’s papers. “I still cook as much as I possibly can, although I’m not allowed to cook in my dorm room, so I’ve purchased a sous vide machine, which I use on a regular basis during friends’ dinner parties,” says Villeneuve. “I cook mushrooms from my operation on a regular basis. I’ve experimented with several recipes that I soon hope to post on our web page to inspire potential customers.”

With no plans to open either a brewery or a restaurant, Villeneuve continues to network to create connections that may come in handy one day. All eight of the Alberta breweries he has approached have expressed interest in partnering with his company, so he may eventually need to expand. “I’m constantly striving to improve myself, create new connections and innovate. Given how incredibly successful the last year at Olds College has been, I can only imagine what the upcoming years have in store for me.”