Transferring credits between college and university can be rocky

Spurred on by a tight job market, students look for the best from both college and university 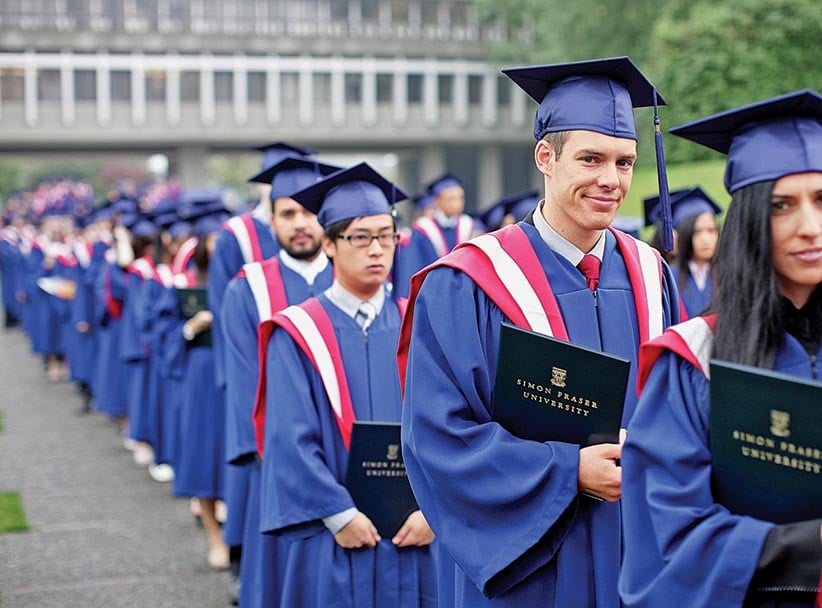 “College? University? Or both?”

That teaser—an invitation to mash up your higher learning—appeared this fall on posters along Toronto’s subway line. It was the latest move by 45 Ontario post-secondary institutes to help students who want to blend different kinds of knowledge.

Demand for hybrid higher education is exploding across the country. In Ontario, some 55,000 students switch every year from one institution to another, with the largest group—40 per cent—moving from a college to a university. British Columbia has more than 52,000 “mobile students.” Most provinces have hubs like the Ontario Council on Articulation and Transfer (ONCAT), which bought those subway ads.

For a generation of career-panicked students, the idea of weaving applied college skills into the more theoretical fabric of the ivory tower seems a smart way to build credentials. And in a savage job market, students need an edge. “When you’re competing for jobs with people who’ve been laid off with 20 years experience, it’s tough,” says Katey Pedersen of Grande Prairie, Alta., who transferred to Vancouver’s Simon Fraser University for sociology after struggling to find a marketing job in the oil patch with her two-year college diploma in business administration. She changed location as well as disciplines to try to boost her job prospects. While the university gave her credit for just a handful of her diploma courses, the 25-year-old says the switch was worth it. “The job market has changed; it’s oversaturated, and the educational requirements are going up,” she says. “The baseline now is a bachelor’s or master’s degree.” Throw in some job-focused college skills, and students feel they have upped their game.

Some of this educational hopscotch is driven by the trouble students have choosing a career path. Often streamed into college or university in high school, long before they know what they want, or pushed by parents into outdated career paths, it’s no wonder so many of them change their mind midstream. “If you choose a traditional route and start to feel you’re not in the right place, you used to feel locked in, but now there are more and more opportunities to change your trajectory in ways that don’t mean you’ve wasted all your time,” says Laurie Rancourt, vice-president of Toronto’s Humber College, which has just opened a special office for transfer students, who now make up a third of its 10,100 undergraduates.

“I’m not saying you should jump between programs willy-nilly, but there are ways to find the right program without having wasted a lot of time and money—and without the old stigma of being someone who ‘couldn’t hack it.’ ”

It was third time lucky for Kraymr Grenke of Timmins, Ont., thanks to transfer credits. Fresh out of high school, he tried Western University for politics and law, but by the end of first year, he knew it wasn’t for him. Next, he tried a four-year aviation technician program at Toronto’s Seneca College. Bad idea. “It turned out to be very science-based for someone who didn’t study science in high school,” Grenke recalls.

Finally, he chose a bachelor of commerce degree at Laurentian University in Sudbury, Ont., which gave him full credit for his first-year courses at Western. He’s now in his final year. “I had to move away from home and grow up as a person before I realized what I really wanted,” says Grenke, now 24. “But I wouldn’t have known what I wanted when I was younger, so I don’t feel it was time wasted at all.”

British Columbia and Alberta have been paving these “credit transfer” pathways for decades, partly because colleges in Western Canada were set up from the start as springboards to university learning. Many institutions, including Vancouver Island University, grant both degrees and diplomas, and are widely praised for recognizing each other’s course credits. Indeed, so many courses are recognized by fellow post-secondary institutions in B.C.—an English course at one college, for example, could count as a credit in, say, 15 separate programs at other institutions—that the number of possible switches under formal “transfer agreements” tops a dizzying 100,000. In Ontario, with many more institutions at play, those possibilities number 160,000.

In Ontario, colleges were created as a separate, job-oriented alternative to universities, which have been slower to give credit for college learning. Yet change is gathering steam—York University offers multiple joint degrees and runs a shared campus with Seneca College, which it will expand when it opens a new campus in Markham. McMaster University runs several joint technology programs with Mohawk College, in which students earn a three-year diploma at Mohawk, then do a fourth year at McMaster to add a bachelor of technology. The University of Guelph built a unique cluster of seven joint programs with Humber College that grants students a fully integrated diploma and degree after four years. “Ontario colleges and universities were set up like two highways side by side, with few on- and off-ramps in between,” muses Lia Quickert, ONCAT’s acting executive director. “Who would have imagined the links there are now?”

In a 2015 survey of 1,000 Ontario undergraduates who switched programs, the Ontario Undergraduate Student Alliance found 48 per cent said “all or nearly all” their credits were accepted. While the largest group—31 per cent—transferred to upgrade their credentials, one in five said they were seeking “a different campus culture” and 22 per cent wanted to be closer to family.

Yet transferring programs can still be a rocky ride, partly because some institutions—often elite universities—are slow to give credit for what a student learned somewhere else. “It’s a huge business [student transfers], but I’ve long criticized universities for snobbishness [about recognizing other institutions’ courses], although often it’s with good reason, because the material covered is not really comparable,” says Michael Skolnik, professor emeritus of the University of Toronto’s Ontario Institute for Studies in Education. “Even with dual programs, sometimes it’s impossible to tell from the websites what the exact course sequence is.” He says there’s still a long way to go.

And educators warn that students don’t do enough homework before jumping ship. It’s a confusing field, with many new ways to mix and match your learning. There are joint programs run by a college and university on the same campus, and others in which students go to one campus after the other. There are partnership agreements in which institutions welcome transfer students from certain programs and even spell out what credits they’ll need in order to switch.

In one popular model, dubbed “2 plus 2,” a college and a university offer a joint program in related fields for which the student typically earns a college diploma in the first two years and moves on to the university to earn a related degree over the next two years. “It’s particularly good for high school students who don’t have a lot of self-confidence in their academic abilities, because they can start in the more nurturing college environment, where classes are generally smaller and more supportive, then move on to university once they’ve gained their confidence,” says Skolnik.

Colleen Ballagh never wanted to go to university; she preferred the hands-on approach of a three-year advanced diploma in communications at Sudbury’s Cambrian College. But when Laurentian University came courting graduates with an honours bachelor of communications in just three more semesters, she jumped at the chance. “So many credits transferred into the university program, I thought, ‘I’m going to do that,’ ” says Ballagh. “By then I had matured and was proud of my academic skills, and found I really liked the theory and history of communications that we got at university.”

Tearing down the old learning silos makes sense for the new, innovation-based economy, argues Michael McDonald, executive director of the Canadian Alliance of Student Associations. “It’s getting more and more fluid with universities now offering work-based learning and colleges offering more degrees, and more students wanting to study in a mixed format,” he says. “If you want to reward students for being interesting, let them be interesting. Psychology majors taking college courses, political science students taking metal work—it’s bound to lead to innovation.”

The two kinds of learning complement each other, says Emmaline Scharbach, communications manager for Ontario’s College Student Alliance. “The combination is a match made in heaven.”

• Call the institution you’re thinking of applying to. Don’t base your decision on the information on their website, warns Michael McDonald of the Canadian Alliance of Student Associations. While British Columbia’s institutions largely guarantee the credit transfer information they post, others do not. Speak to the student transfer specialist. Most have them.

• Make sure you’re speaking the same language. One of the stumbling blocks can be the different terms institutions use, warns Zachary Rose, executive director of the Ontario Undergraduate Student Alliance. What do they mean by credit? How many credits per course? They may use terms like “equivalency,” “accessibility,” “transferability” or “mobility” to say the same thing.

• Even if you’re not thinking of switching, keep your course outlines, suggests Emmaline Scharbach of the College Student Alliance. Years later, if you want to get credit for that course from a new institution, having the reading list and course outline will help the new school assess your credit—especially if the course has since changed.

• Ask for prior course credits to be considered for credit, as well as job experience—too many students don’t think of it, notes Judy Tavares, manager of student transfer services for Humber College. “Often students transfer programs and it’s not until they’re sitting in a new class that they realize, ‘Wait—I think I took this before.’ ”

• If you’re starting to feel you’re in the wrong program, don’t wait to contact the counselling department and registrar at your institution to see what your options are, says Humber College vice-president Laurie Rancourt. “You don’t have to stick to your first decision. Your education doesn’t have to be linear.”

• Know that the mark you earned in a course may influence whether another institution accepts it. When you earned the credit may be a factor as well; some institutions don’t like any credit more than three to five years old.

Tools: Here are some websites for students keen on changing their program

CollegesInstitutes.ca/policyfocus/transferability
A guide to student transfer across the country. It has links to transfer hubs in several provinces.

CollegesInstitutes.ca/policyfocus/transferability/colleges-and-universities-partners-in-education
A showcase of joint programs across the country.

bccat.ca
The British Columbia Council on Admissions and Transfer’s hub. It runs an interactive website that lets you find matches for your own credits at BCTransferGuide.ca.

acat.gov.ab.ca
The Alberta Council on Admissions and Transfer helps students move between institutions. It runs an interactive website at alis.alberta.ca/ps/tsp/transferalberta.html and offers an app.

oncat.ca/
The Ontario Council on Admissions and Transfer runs ONTransfer.ca.

ouac.on.ca/docs/undergrad/collab_b.pdf
A summary of the joint programs being offered in 2017 in Ontario, by the Ontario Universities Application Centre.

catnb.ca/
The Council on Articulations and Transfer of New Brunswick runs an interactive website Portal.catnb.ca.