New cases of HIV are rising dramatically in Canada. And self-testing kits are nearly as easy to use as a home pregnancy test. 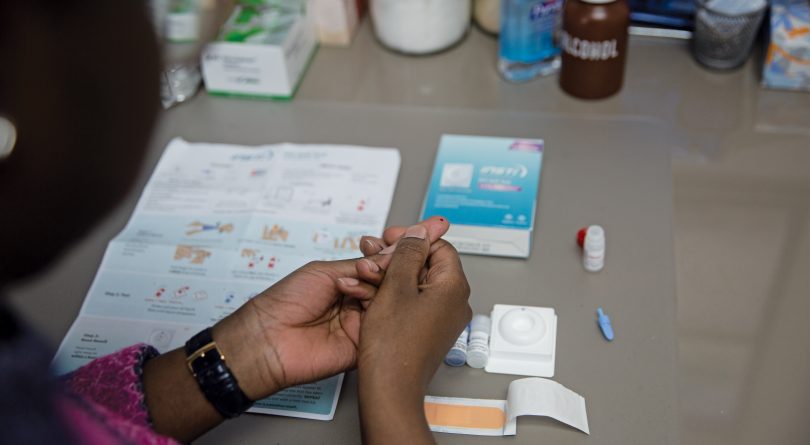 Christian Jasserand, 56, was on a work trip in the U.S. three years ago when he strolled into a drugstore and bought a self-testing HIV kit off the shelf for US$35. After he tried it back home in Toronto—with a touch of saliva and a few minutes of waiting—he wished he’d bought several.

“I thought, you can do this in the comfort of your home. You don’t have to go to a doctor’s appointment, or to a clinic, you do this on your own terms,” says Jasserand. It was a quick and efficient way of finding out he had tested negative for the virus. “It makes it much easier on a person.”

Seventy-seven countries, including the U.S., South Africa and Nigeria, have approved home self-testing HIV kits, using either a mouth swab or a drop of blood. Canada is not among them, despite the fact that the World Health Organization (WHO) gave its blessing in 2016 to self-test HIV kits as a tool in the quest to eradicate the virus. It’s also despite the fact that the Canadian company bioLytical Laboratories Inc. is the manufacturer of INSTI, a finger-prick self-test that WHO has assessed and pre-approved for use in UN agencies around the world.

“It’s totally doable,” says Nitika Pant Pai, a research scientist at McGill University Health Centre in Montreal and an associate professor in McGill’s department of medicine. “If you can do it in Africa, why can’t you do it in Canada?”

In the past, companies that make self-tests have walked away from Canada because the market here is too small or the regulatory process too cumbersome, says Sean Rourke, a psychiatrist and scientist at the MAP Centre for Urban Health Solutions at St. Michael’s Hospital in Toronto.

One stumbling block for approval from Health Canada has been the lack of a clinical trial in Canada showing how accurate and easy to use the kits are, and whether users will seek medical care if they test positive. So, Rourke raised the money for a 1,000-person clinical trial across five Canadian cities on INSTI finger-prick self-testing kits. Pant Pai is running the Quebec side of the trial. They expect it to be finished in February.

Once bioLytical submits the results to Health Canada, Rourke predicts the government will have everything it needs to approve the kits. “Hopefully, by early spring or summer, the first self-test kits will be available in Canada,” he says.

The pressure for access in Canada to self-test HIV kits is mounting because of several troubling trends. First, far from being an epidemic in retreat, new cases of infection are rising dramatically in Canada. In 2018, 2,561 people tested positive, a jump of more than 25 per cent from 2014. In fact, the new-infection figure for 2018 is among the highest in the past two decades.

The rate of infection in the general population is also rising. It hit 6.9 for every 100,000 Canadians in 2018, compared to a two-decade low of 5.8 four years earlier. True, the rate has dropped from much higher levels in the 1980s, when the number of infections peaked in Canada, but these rising numbers are the opposite of what’s happening in many other countries. Globally, the estimated number of new HIV infections has declined steadily since 2000, according to the 2019 report from UNAIDS, the United Nations organization leading the global effort to end the public health threat of HIV/AIDS.

Why are things going backwards here? One key reason is the 9,000 or so Canadians who are positive but don’t know it, and can spread the virus inadvertently, says Rourke. That comes to about 14 per cent of the 63,000 Canadians living with HIV, a stat that puts Canada at the back of the G7 pack, tied with the U.S., says Laurie Edmiston, executive director of CATIE, the Canadian AIDS Treatment Information Exchange in Toronto.

“We need to make it easier for people to be tested,” she says.

The global target (set by UNAIDS on the strength of mathematical projections aimed at ending the epidemic) is to have 90 per cent of those living with HIV know their status by this year, limiting those who don’t know to 10 per cent. The United Kingdom has met that goal and so have Botswana, Cambodia, Eswatini and Namibia. (There are two other targets: that 90 per cent of people living with HIV be on medication and 90 per cent of people on medication have suppressed viral loads. Canada, which endorses the plan, has missed the first two targets.)

And that’s where the self-test kit could turn things around.

“If you want to reach those who are undiagnosed, you’ve got to bring the test to the people,” Rourke says.

Today, almost all of the 1.5 million HIV tests done in Canada in a year are conducted the old-fashioned, sit-on-your-hands-and-wait way: a health professional draws blood and sends it to the lab, and you get your results in a week or so. Canada has approved a version of the INSTI finger-prick test that can be administered in a clinic, but it hasn’t taken off. Despite the one-minute result and more than 99-per-cent accuracy, in 2019, only about 55,000 of those tests were done in Canada, Rourke says.

A few months ago, one of Jasserand’s friends was going through an HIV scare and needed to be tested. His doctor couldn’t give him an appointment for a week. The local clinic didn’t have an opening for even longer. It was a nightmare.

“I find it truly shocking and shameful,” says Jasserand, “that in Canada we haven’t introduced these kits yet when the rest of the modern world has done it and demonstrated that it’s a pretty good thing to do.”

The problem is not just getting swift access to a doctor or clinic. ACT, which was once known as the AIDS Committee of Toronto, recently did a survey asking why people were reluctant to get tested. Some said they hadn’t yet come out to their family doctors and were uncomfortable asking for health care related to their sexuality, says Tyler Morden, manager of ACT’s gay men’s health programs. Others reported being afraid of showing up at HIV-care or sexual health clinics for fear of outing themselves or running into friends or ex-partners.

“Self-testing would offer confidentiality and privacy,” Morden says. “It would also reach a group of people that we’re not seeing in our physical spaces where we’re offering testing today.”

The kits, which test for the presence of antibodies to the virus, are nearly as easy to use as a home pregnancy test. For the mouth swab, you take a sample of saliva from your gum, insert it into a tube of pre-mixed fluid, and then wait 20 minutes for the fluid to travel up the test stick. If you get no lines, the test isn’t working properly. If you get one line, it means you are HIV-negative. Two, and you are positive. The test manufacturer provides links to counselling and care and a how-to video.

The process for the INSTI blood test has more steps, with three tiny vials of fluid and a flat, dish-like device containing a small membrane. You prick your finger, put a drop of blood into the first vial, shake it four times, pour it onto the membrane and wait until the fluid disappears. Then you shake the second bottle—no blood needed—and empty it onto the membrane, waiting until it, too, vanishes. Same thing with the third vial. Within a minute, you will have either one dot that tells you the test is negative, or two, meaning positive. Again, the manufacturer provides links for further care.

To make things even easier, Pant Pai developed an open source mobile app called HIVsmart! to guide people through the test and link them to health care and counselling if they test positive for the virus. The app has already been translated into several languages and can be used on tablets or smartphones.

While the home tests are considered highly accurate, health professionals advise people who test positive with them to have a traditional lab test done to confirm the diagnosis and to seek appropriate medical care.

READ MORE: How a typo created a scapegoat for the AIDS epidemic

Another driver behind the push to get self-testing approved is that it matters when you start treatment. Combination antiretroviral therapy, which was discovered in 1996, greatly lengthened the life-expectancy of people with HIV. But doctors used to hold off treatment until the infection had fully taken hold, meaning people’s immune systems were in rough shape before they got medication. Today, patients get the drugs immediately. Instead of being a death sentence, HIV is considered a chronic disease akin to diabetes that requires daily medication.

As well, a person who is HIV-negative can take a daily prescription of PrEP, or pre-exposure prophylaxis, to prevent getting HIV. It’s another reason to have access to testing.

“We don’t hear or talk about AIDS anymore, because AIDS has really gone away for the most part,” Rourke says. “As long as people get access to the medication.”

Not only that, but once a person’s viral load is under control with medication, that person cannot infect another.

It adds up to an opportunity Canada has never had before. If self-test kits are finally approved for drug-store shelves and if more Canadians living with HIV gain access to medication, it’s a whole new world.

“We can end the HIV epidemic,” says Rourke. “Other countries have targets for 2030—we can do this in three to five years.”

This article appears in print in the February 2020 issue of Maclean’s magazine with the headline, “The DIY difference.” Subscribe to the monthly print magazine here.