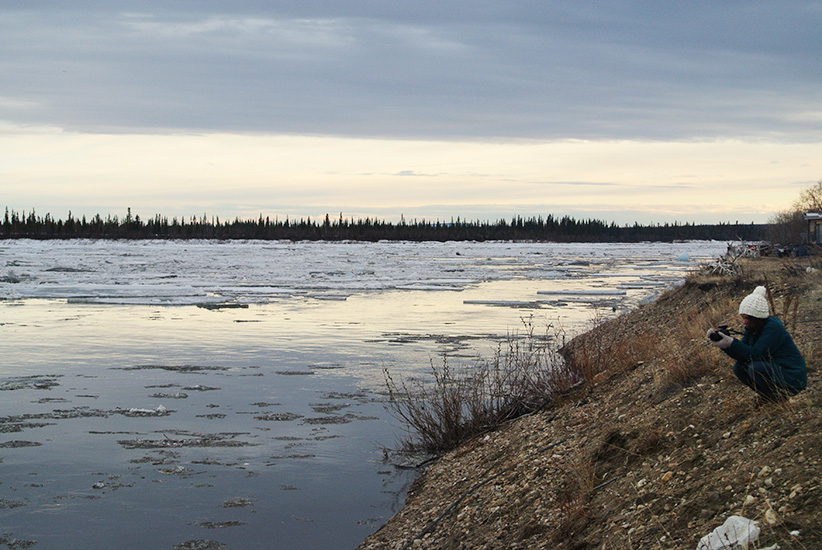 Different speeds: Students from southern cities had eye-opening experiences in the north

The stories of First Nations people are rich with symbols from the natural world. They can describe how to make one’s way across the land, or how to hunt, fish, find berries or behave in society. In a climate-change world, some of these stories are slipping away.

The permafrost is thawing. Where once was solid ground, now there’s bog and widening rivers. Landmarks sink or fall over, boats are grounded in shallow waters and access to food and travel routes are uncertain. Even the types of plants and animals are changing, as well as where to find them. For the Dene people of the Jean Marie River First Nation in the Northwest Territories and Vuntut Gwitchin First Nation in the Yukon, who depend on understanding nature for their food, these are serious issues.

A collaboration between Yukon College’s School of Visual Arts in Dawson City, its Yukon Research Centre in Whitehorse and the University of Saskatchewan is adding a human dimension to the science of climate change. “We are trying to synthesize what the physical scientists and traditional knowledge holders have observed,” explains project director Graham Strickert, an adjunct professor at Yukon College and an assistant professor at the University of Saskatchewan’s school of environment and sustainability. The goal is to make climate-change research more relevant to northern communities through a multimedia project, which has a deep understanding of the impact of climate change on traditional land use and goes beyond the “loading-dock model, where scientists drop a report on policy makers and hope they do the right thing.”

Called Changing Landscapes and Northern Ways of Life, the three-year project began in 2015 and is primarily funded with $240,000 from the federal Social Sciences and Humanities Research Council. In the summer of 2016, four visual arts students recorded stories from elders, artists and other community members in Old Crow, Yukon and Jean Marie River, N.W.T. They took more than 2,000 photographs, 68 audio recordings and 268 videos to document stories about climate-change impact, such as disappearing landmarks that figure in oral history and culture.

Dene elder Margaret Ireland recalled how community members would use frost heaves as markers while hunting or travelling. “We would find our way on the land by looking for frost heaves. They were very big; small animals we could hunt would live in there. People depended on them. These things are pretty well gone now because the ground has melted.” 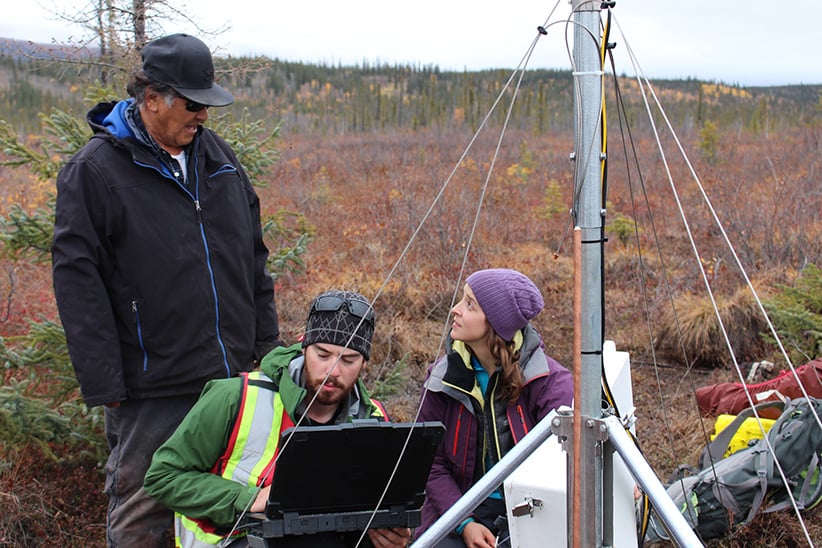 The art students were invited to participate by the school’s director, Curtis Collins. Isaac Roberts and Alexandru Stratulat travelled to Jean Marie River, and Sierra Megas and Tyler Anderson went to Old Crow. Instructor Bill Burns advised them to “listen deeply” to their subjects. “When we hear things we think we understand, instead of jumping to conclusions, we should dig deeper.”

Alison Perrin, climate change educator and project coordinator at the college’s Yukon Research Centre, says they started with scientific data and studied what was happening with the permafrost thaw. Then they overlaid stories from the people in those regions and combined it all in a multimedia presentation they will bring back to the communities for further discussion and research. “We are a visual people,” says Ireland. “It makes more sense to us to see things in this way.”

Both the shift to northern living and the connection to the people he met during the project were memorable for Isaac Roberts, 19, who came to the Dawson City art school from downtown Toronto. “You realize that life has different speeds,” he says. Roberts was impressed with the people of Jean Marie River, especially when his team’s vehicle sunk into the mud. “We were helpless. A bunch of elders came, some even in their 80s, took out chainsaws, made logs into slats and laid them under the vehicle.”

The First Nations communities will help decide how to share the gathered stories and ideas. But all agreed that an artistic approach to the hard science and the stories of their people will create a narrative that will reach the hearts and minds of a broad audience.

In one generation, these communities saw changes in the land that connect them to causes beyond their control. “But they are eager to know the best science and work together so that they can adapt,” says Burns. “They have tremendous cultural courage.”