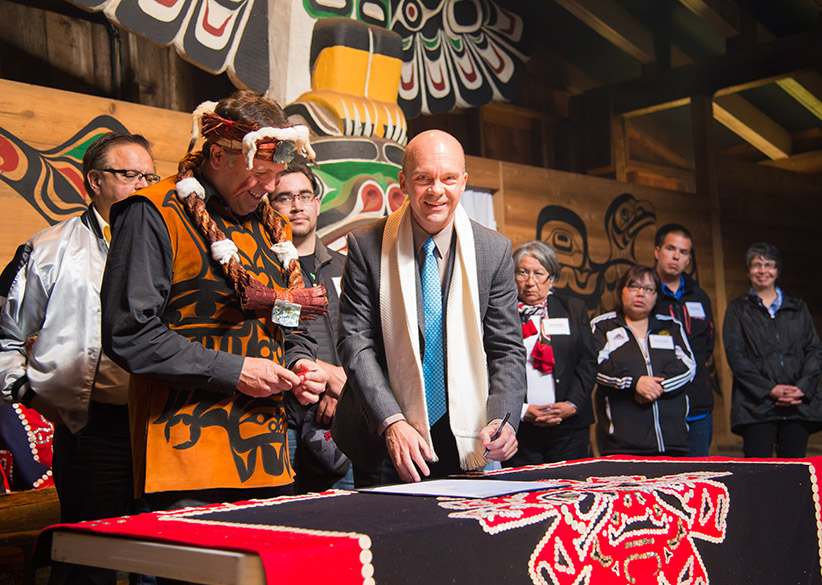 It took a year of negotiations, but it was all worth it the day Ken Tourand watched about a dozen college presidents agree to hire more Indigenous staff, meld Indigenous culture into the learning experience and recognize Indigenous land and governance agreements.

These were just three of seven principles the first signatories of Colleges and Institutes Canada’s Indigenous Education Protocol agreed to when they signed their names in Ottawa that day in December 2014. It was the seventh principle—that colleges must be accountable to the Indigenous communities in their backyards—that caused some anxiety among presidents, recalls Tourand, president of Nicola Valley Institute of Technology, the only public post-secondary Aboriginal institute in British Columbia.

“It really caused angst. They asked what was meant by the word ‘accountable,’ and some even said they weren’t accountable to Indigenous communities in their areas.”

Tourand chaired the committee on behalf of Colleges and Institutes Canada, or CICan, a national organization representing more than 135 colleges, CEGEPs, and polytechnics. The protocol was prompted by discussions with the Assembly of First Nations, according to Anne Toneguzzo, CICan’s director of government relations and policy research.

The AFN “wanted to raise the importance of post-secondary education for Indigenous peoples,” Toneguzzo said. “We’d already been working with our members on Indigenous education issues but the discussion helped us focus.” While 40 of more than 135 CICan members have signed the voluntary protocol, some institutions likely won’t because they do not have a significant Indigenous community. Others are in various stages of internal discussions about signing.

At protocol committee meetings, the presidents who disagreed with the language around accountability tried to change the wording. But Tourand and CICan refused to budge.

For Tourand, a Métis originally from Kamloops, the issue was about keeping the protocol authentic. “If institutions are truly committed to providing an environment for Indigenous students to succeed, then being accountable to the local First Nations communities is a logical first step. How can you meet the needs of the Aboriginal community if you don’t talk to them?”

Tourand is clear about why he considers the protocol—and by extension Indigenous education—important. The high school graduation rate for B.C.’s Indigenous students hovers around 62 per cent, so the odds of an Indigenous student reaching Grade 12 is akin to a coin toss, something he finds unacceptable. “This protocol should be driving action in institutions to create better environments so Aboriginal students can succeed,” he says. For some colleges, the signing of the protocol was a historic event, marked by pictures and press releases. But North Island College on Vancouver Island went one step further, and had representatives from the surrounding 35 First Nations from the Coast Salish, Kwakwak’wakw and Nuu-chah-nulth traditions sign with them, many of whom represent remote communities that are accessible only by boat or plane.

“We seek guidance and direction from the First Nation communities and have the privilege of responding to their educational needs. It is only appropriate that we sign together,” the school’s director of Aboriginal education, Vivian Hermansen, said at the time.

In another first, CICan handed out new awards for excellence in Aboriginal education this year. The first gold went to Yukon College for its ground-breaking arrangement with the territory’s 14 First Nations, who are part of the president’s advisory council on First Nations initiatives and are used as a sounding board for administrators as they discuss programming and services. Nicola Valley Institute of Technology, founded by five First Nations bands, received the silver award. “Indigenous education is what we do,” says Tourand, pointing to its First Nations board of governors, Elders Council, and the fact that 80 per cent of its students are Aboriginal.