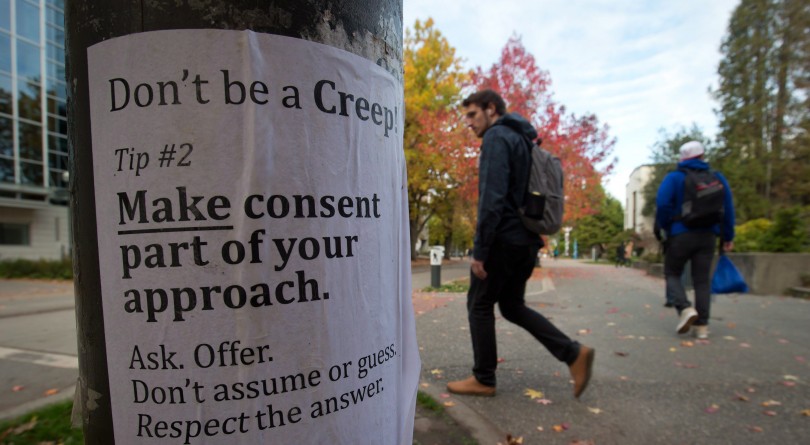 University of British Columbia students walk past a sexual assault poster on the campus in Vancouver, B.C.(Darryl Dyck/CP)

Teaching university students consent doesn’t reduce the prevalence of sexual assault on and off campus, but it may help individuals identify themselves as survivors of violence, an analysis of the Maclean’s student survey shows.

Six in 10 students nationwide said they received education about what constitutes consent from an official university source—university staff, the student union or a student group. But universities where more students receive such education were actually slightly more likely to have more students who said they had been sexually assaulted while enrolled, not fewer (A correlation that held after controlling for gender).

Université de Sherbrooke professor Geneviève Paquette said one possible explanation is that students who receive this education are better able to identify instances where they did not give adequate consent. Such students would be more likely to report themselves as sexual assault survivors when responding to our survey.

“Theoretically, consent education can enable a student to become aware that she has been sexually assaulted. In the field, we sometimes observe it,” Paquette said in an email. She said the results demonstrate the need for universities to go beyond consent education: “When institutions train students about consent, intervention services must also be available and provided as students will be better able to detect situations of sexual violence.”

The survey did not ask students whether they were assaulted before or after receiving education about consent, or whether the university offered consent training on a voluntary or mandatory basis. Paquette said it’s possible that sexual assault survivors may be more likely to attend voluntary educational sessions about consent, which might also partly explain the association.

The 2017 Maclean’s Student survey is the first nationwide survey on campus sexual assault in 25 years. The survey polled 23,000 undergraduate students at 81 campuses about a wide variety of issues related to student life.

While 60 per cent of students said they received some instruction about the definition of consensual sex from an official university source, 24 per cent said they were not taught about consent by anyone. An additional 6 per cent said they were taught about consent by their peers only, with the remaining 10 per cent of students saying they were not sure whether or not they received any consent education. Students reported similar rates of receiving education about how to report sexual assaults and access sexual assault-related university services.

The survey found female university students were significantly more likely to be sexual assault survivors, with 23 per cent of women and seven per cent of men saying they have been sexually assaulted. Those figures include students who were assaulted either before or during their university studies.

Non-heterosexual students are also significantly more likely to be sexually assaulted, a finding that’s in line with other research. About one-third of queer respondents — students who identified themselves as gay, lesbian, bisexual or another non-heterosexual orientation — said they have been sexually assaulted. About two in five queer women and one in five queer men identified themselves as the survivors of sexual assault. Queer men and straight women were almost exactly as likely to have been sexually assaulted, according to the survey results. 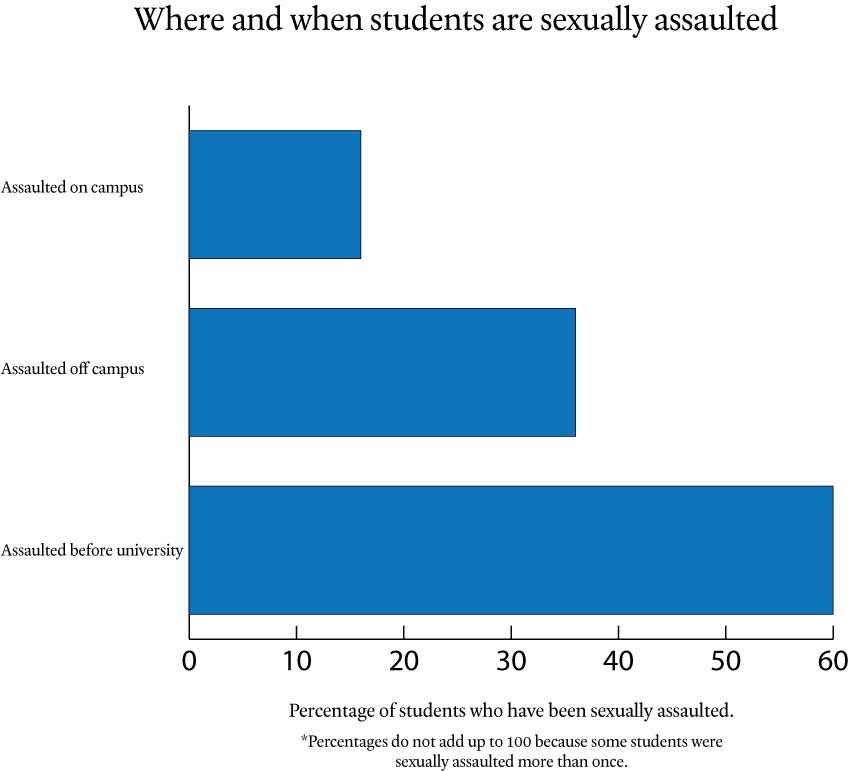 The use of date rape drugs was relatively rare. Just seven per cent of students who have been sexually assaulted said they were given a drug without their knowledge or consent, a rate that was similar for both male and female survivors.

MORE ABOUT SEXUAL ASSAULT ON CAMPUS: