COVID-19 in schools: The runny-nose dilemma that has authorities stumped

Here's the latest on outbreaks, closures and case numbers as students across Canada return to class 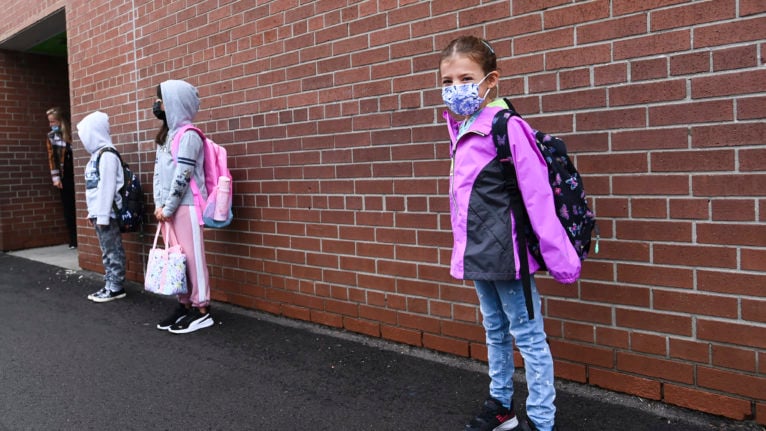 This year’s back-to-school routine is unlike that faced by parents and children in any other year. To help provide guidance and context for parents, Maclean’s has compiled information and data from across the country into this post, which will be updated regularly.

The first weeks of this school year were always going to be rocky, as families and teachers adapted to all sorts of new COVID-19 rules, including wearing masks, physical distancing and cohorting. One of the thorniest problems, though, turns out to be a condition that returns every autumn: runny noses.

Each September, colds and allergens flourish as kids mingle in often tight facilities. Schools are filled with youngsters reaching for tissues (and sleeves) to wipe their noses. This year, shoving tissues into a backpack isn’t enough, as parents try to decipher whether their child’s runny noses are caused by seasonal allergies, colds or COVID-19. Depending on the rules of each province (and health region), the sniffles could necessitate getting a negative COVID-19 test before a child can return to class. Within days of schools reopening, thousands of parents laid siege to testing centres across the country, children in tow.

Testing delays were inevitable. The worst province for bottlenecks appears to be Ontario. At one testing site in Kitchener, people reportedly began lining up at 2:30 a.m.; by 7 a.m., there were long lines of cars as far as the eye could see.  Another testing centre in Ottawa closed minutes after it opened, after waiting residents grabbed every testing spot for the day. Some waited days for results. As of Sept. 24, Ontario reported having more 50,000 tests under investigation, with around 35,000 new ones coming into its laboratories daily.

The pressures on parents and the public health system kept mounting. On Sept. 21, British Columbia removed “runny/stuffy nose” from its student health checklist used by parents each morning, along with sore throat, headache, fatigue, muscle aches and five other symptoms. “If you have a slight runny nose by itself then, that in and of itself is not a reason for a child, and we’re talking about children here, to necessarily stay home from school,” said Dr. Bonnie Henry, the province’s chief health officer. “This was a recommendation from public health to remove some of the symptoms, given the very low probability of these symptoms by themselves indicating COVID,” the provincial ministry of health told the CBC. “They are also very common in children so there are concerns that it would unnecessarily exclude children.”

Other classic COVID-19 symptoms, including a fever, chills and shortness of breath, remain on the B.C. checklist as reasons for kids to stay home, and possibly need a COVID-19 test.

Whether runny noses/nasal congestion is deemed by the province to be a COVID-19 symptom for children (some provinces require two or more symptoms for testing):

Canada: The Canada COVID-19 School Case Tracker website, created by scientists and medical professionals, has a map that plots school outbreaks.
Alberta: The government page tracking school-related COVID-19 cases; also, the Support our Students website tracks official notifications of outbreaks.
Saskatchewan: The province announced it will provide some data on COVID-19 in schools on a weekly basis.
Ontario: The government has a page tracking school-related COVID-19 cases; and Ryan Imgrund, a hospital biostatistician at Southlake Regional Health Centre is tracking school-linked infections daily on his Twitter feed.
Quebec: Covid écoles Québec, a citizens’ group tracking official notifications of outbreaks, has a running list on its website and Twitter feed.

“I feel like it’s going to be a very dark winter with little kids”—Matthew Slutsky, father of two children, ages 2 and 3, to the Globe and Mail

This table outlines general provincial requirements for schools as they reopen, taken from advice on government websites and press releases. Please use this table as general guidance only: many of the thousands of schools and districts/boards in the nation have their own specific requirements, some of which are changing daily.

Where the risk lies

How many young people have contracted COVID-19 in recent weeks? That is the question many people are asking, especially as the number of new cases rise across the country. The answer is less than definite. While there are good sources for raw tally of cases, deaths and tests across the nation, there is no central repository in Canada for age-related COVID-19 data. Some provinces offer easy ways to download their COVID-19 statistics while three provinces only include age information in press releases. So consider these charts a reflection of overall trends showing how many young people are being infected with COVID-19.

The 10 largest cities in Canada account for more than one third of the nation’s population, and thus huge amounts of students. So Maclean’s has broken down recent COVID-19 case data by age for the public health units for those cities (Winnipeg’s data is missing because Manitoba stopped releasing case information broken down by age and health region).

A graphic tracking per capita rates of new COVID-19 cases show not only which direction provinces are going but also how they compare to the national rate. To more easily show trends and keep most of the daily swings in data to a minimum, Maclean’s uses a seven-day rolling average. (As B.C. and Alberta do not post new data on weekends, the rolling average only partially compensates for a lack of data on three-day holiday weekends.)