Unmanned aircraft have proven invaluable for mapping inaccessible landscapes in Canada’s North. How one college is working hard to meet the demand for pilots. 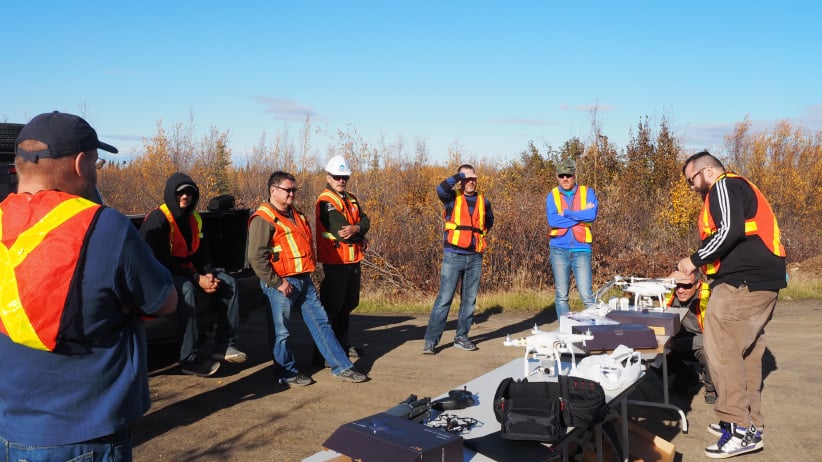 Students and teachers in the Aurora College Drone Program. (Photo by Jiri Raska)

A motorcycle races along the ice road from Inuvik to Tuktoyaktuk, a black speck against a white landscape. As the bike speeds toward the horizon, the camera swings up and out to reveal a breathtaking aerial shot of the famous road and the perfect, pillowy tundra that surrounds it.

It’s just one of the stunning scenes Inuvik filmmaker David Stewart was able to capture for an upcoming documentary, thanks to drone technology. “We fly drones to capture wildlife and landscape [on film] to add an extra dimension to our stories,” he says. As a producer for the Inuvialuit Communications Society, a production company, Stewart employs a licensed drone operator to record his images. But as the demand for unmanned air vehicles (UAVs) grows in the North—and in Inuvik in particular—he decided it was time to get his own training. When he heard about the three-day drone training course offered by Aurora College last September, he signed up. “It was a fascinating course,” Stewart says. “It was very technical. I didn’t realize there would be so much flight physics involved.”

Many drone enthusiasts aren’t aware of airspace rules and regulations, or that Transport Canada requires most drone operators to apply for a certificate to legally fly UAVs. “They share the same airspace as every other air operator in the sky,” says Sterling Cripps, founder of Canadian Unmanned Incorporated, the company that teaches the course. “Drones are highly technical machines that are subject to mishandling and failure.”

In each class, Cripps asks his students to look up drone fails on YouTube. The seemingly endless supply of footage of UAVs crashing out of the sky and bursting into flames hammers home his message that drone flyers need to understand their machines and how to use them safely. The course covers topics like aerodynamics, reading aeronautical charts, and air laws and regulations. At the end, Cripps offers an optional hands-on component, where students can test what they’ve learned and get some pro feedback. There are a lot of experienced pilots up north, Cripps says, “and they have a lot of talent. There are people up there who are leaders in this field.”

As developing drone technology makes it easier and more affordable to use UAVs for commercial and recreational purposes, Cripps has seen course enrolment skyrocket. He developed the curriculum in 2009 with just 20 students enrolled. This year he taught 600 people across Canada, from RCMP officers and land surveyors to commercial photographers and part-time hobbyists. Demand for UAVs is particularly high in remote northern communities like Inuvik, which is located two degrees above the Arctic Circle. “Transport Canada needed to map out airports in the area and, if we had had our operating licences in place, we would have scored this huge project.” says Stewart. “But instead, southerners came up to do the work.”

Matthew Dares, manager of the technology development for the Aurora Research Institute, a division of the college that supports scientific work in the Northwest Territories, brought Cripps to the school in an attempt to satisfy the increasing need for local licensed operators. His team uses UAVs to capture images to help create 3D models of swamps, gravel pits and other inaccessible environments. “The areas are remote and hard to access, so having more trained people in the community allows us more flexibility,” he says. There are other challenges to flying in the region. Inuvik is in restricted airspace, which means even recreational drone operators need to know how to communicate with Transport Canada while flying. Then there’s the weather: rain, wind and extreme cold make it especially difficult to fly. Cripps instructs students on the right equipment to allow drones to fly in lower temperatures. Dares says the feedback from the course has been positive, and he plans on bringing Cripps back to Aurora in the near future. The college also plans to offer the course at their Yellowknife campus. “There’s a growing interest in the region in wanting to become freelance drone pilots,” Dare says.

As for Stewart, he’s keen to put his new drone knowledge to work on an upcoming TV series collaboration with APTN. “On the darkest day of the year, the sun doesn’t come over the horizon here but the sky just glows pink and purple. It’s beautiful. I look forward to using a drone to capture that.”