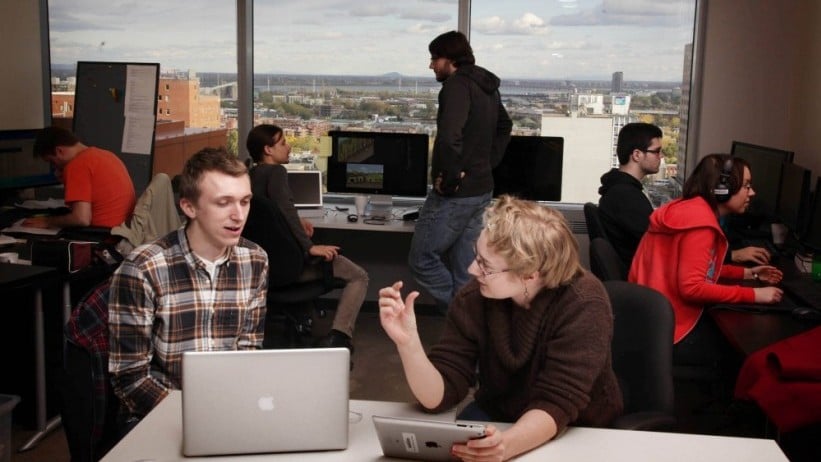 Inside the Hexagram Gaming Lab at Concordia University (Roger Lemoyne)

James Flynn, a Newfoundlander studying political science and economics at the University of Toronto, spent his Christmas holidays working on his programming skills through Code Academy, a free online service.

“My high school didn’t offer it so I didn’t end up pursuing it at the university level,” he says. Had he been exposed earlier, he might have pursued a degree with more job opportunities. “Everyone I know who is studying computer science has had summer internships in their field,” he adds. “It’s one of the fastest growing fields right now.”

He may be right. According to the recent Ontario Graduate Survey, 95 per cent of 2010 computer science graduates were employed in 2012 compared to 90 per cent of 2010 graduates with humanities degrees. Average pay two years after graduation increased from $53,901 for the computer science class of 2004 to $63,044 for the class of 2010 while average salaries for humanities graduates declined slightly to $38,696.

Flynn is not the only one who thinks Newfoundland’s students risk missing out. Since launching a petition in March calling on the province to improve computer programming education, he has received more than 100 signatures, including from expatriates working in San Francisco, New York and Toronto. He says his ultimate goal is to have computer science become a mandatory part of the curriculum.

Newfoundland and Labrador’s education ministry defends its computer science curriculum by saying that students start learning the basics of computer programming in Grade 8, can take a course called Integrated Systems in Grade 10 and may opt to study Robotic Systems in Grade 12 where they learn “more advanced fundamentals of programming components.” In that course, “it is expected that students will develop custom code to control robotic components,” according a ministry representative.

Flynn says that Ontario does better; at least it offers some more advanced options. Ontario’s curriculum includes multiple computer science and computer technology electives in grades 10, 11 and 12 for students in both college and university streams. “These courses are offered in sequence, meaning that students get broad, continuous exposure to computer programming during their high school careers.”

Though he’s criticizing Newfoundland’s curriculum, he still loves the province. “I would really like to get a job back there if I could but jobs there are often hard to find,” he says, “people often end up leaving—especially computer programmers.”