How to get free money for university 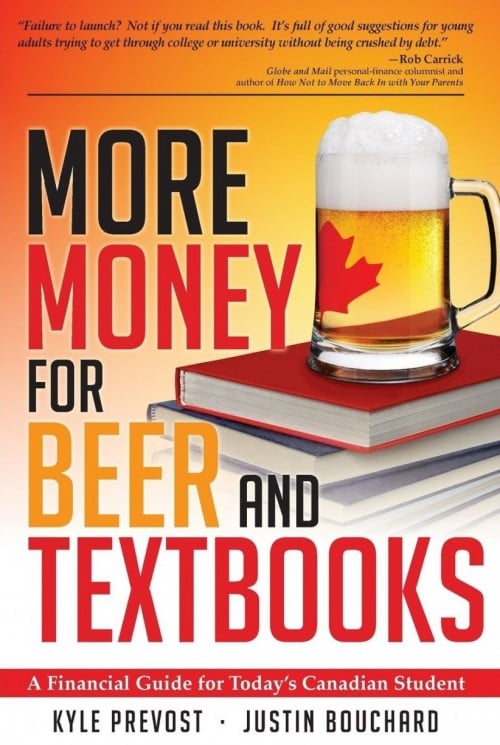 In More Money for Beer and Textbooks, high school teacher Kyle Prevost and University of Manitoba residence dean Justin Bouchard offer more than 200 pages of advice on how to graduate debt free and employed as they both did in 2010 despite, they admit, spending a lot on beer. One of the reasons for their success was the hard work they put into getting scholarships. “Even though we weren’t stand-out students at the post-secondary level, we still each received thousands of dollars in awards money,” they write. Here are nine of their tips for landing scholarships and awards, adapted from the book, where you’ll find plenty more.

1. Quantity Is Key
“You miss 100 per cent of the shots you never take,” said Wayne Gretzky. We often hear students say things like “Scholarships are a waste of time. I applied for like three of them and like didn’t even get any.” Well, ﬁrst of all, one of the reasons why you didn’t receive any is that you talk like someone raised in the 21st century, and the people awarding the cash were raised in the 20th century—so get someone “old” to look over your stuﬀ. Seriously, though, if you apply for only the ﬁrst three scholarships in the Google results, your chances aren’t going to be very good: the top results are almost certainly very popular and have many applicants competing against you. The people who really succeed are those who apply EVERYWHERE.

2. You Deserve It (at Least as Much as the Next Person)
Say it with us: “I . . . deserve . . . free . . . money.” Likely the biggest thing stopping you from raking in easy dough is your own procrastination (the student special) and your disbelief that you could be the one accepting a sweet cheque one day. This thinking usually leads students to throw half-ﬁnished applications in the recycling bin or conveniently put them on the back burner until the deadline has passed (that way you don’t actually have to admit failure). Don’t talk yourself out of ambition, and don’t procrastinate. Just get it done.

3. Build Creative Salesmanship…
The average person who’s reviewing scholarship applications has dozens of responses and is probably either volunteering to do this or it’s been tacked on to all of his or her other daily administrative duties. Is he or she going to pay a ton of attention to every candidate? The truth is that you, the applicant, have to do your best to make yourself stand out. Subtle word choices are often the diﬀerence between a second look and the paper shredder.

4. …With Speciﬁc, Concrete Examples
Don’t overuse such terms as hard worker, smart, fast learner or motivated. We’re not telling you to avoid those phrases completely—but try to tie these nice buzzwords in to speciﬁc situations. What makes you “team-oriented”? Maybe you picked up these skills through various athletic teams you were a part of; or maybe it was working at McDonald’s. The more you get used to describing concrete examples of your skills, knowledge, and abilities, the easier it gets.

5. Preach to the Choir
Check the application and any information advertised with the scholarship. There are often great tips on what buzzwords administrators will be seeking when they look over applications. Often these are in the “Criteria” section. Some common examples are citizenship, diversity, and leadership. Simply take the description, language, and organization you’ve used in other applications and tailor them to the theme of the new one. We were big fans of glorifying whatever we wanted to say by writing this: “I was able to maintain a full course load with a GPA, while doing…” Then we would simply ﬁll in an activity that pertained to the group, club, or organization, or the theme of the scholarship. By identifying the theme and goals of the sponsor, you’re giving yourself a huge advantage.

6. No Unforced Errors
In case you’ve never watched tennis (we don’t either; tennis is for people who can’t play real sports), an unforced error is what happens when a player screws up something that was relatively easy and it results in a point for the opposing player. Unforced errors in sports might be maddening to the players making them, but they’re fairly easily explained by the fact that those players have to react extremely quickly. That excuse doesn’t work for your scholarship application and essay. It really isn’t that hard to proofread once for content, once for word choice, and once for grammar. If you can track down a destitute English major, getting another pair of eyes to take a look at it for you is never a bad move.

7. The Vaunted Long-Term Plan
We adults have this weird fetish for planning. We love hearing that youth are tightly focused and have everything all planned out. For some reason, we’ll give money to someone with an extremely speciﬁc plan before we give it to students who truthfully profess that they really have no idea what they want to do but just love learning. We’re not telling anyone to make up long-term goals, but we’re saying that if you are mulling over multiple options (and what young adult isn’t?) it might be beneﬁcial for you to focus on depicting one that is semi-related to the award you’re applying for. If you don’t know what career path you want to take, at least mentioning a few solid goals can help you sound more grounded and “adult-like”.

8. Get the Right People in Your Corner
When you’re asking people to be your references, it’s important to think about what they will say about you. We constantly watch as applicants choose individuals who may be good people and have favourable opinions of the applicants, but who don’t actually know much about them or are not good communicators. Remember, the idea here is to get someone to sing your praises and make you stand out. One other suggestion is to take the notes you made when you began applying for scholarships—the notes of all your extracurricular activities, achievements, volunteering experience, academic excellence, etc.—and make copies of them for your references. Often, your references are busy people and they can forget certain things or give an incomplete picture of what you’ve accomplished.

9. Momentum and Stepping-Stones
Being recognized once makes it easier to be recognized again—and even easier the third time. If the people administering the scholarships can look down and see that someone else thought you were legitimate (as proven by your shiny scholarship) then they too can safely think highly of you. This is similar to what psychologists call the “halo eﬀect.” You thus can quickly gain momentum by applying for numerous scholarships and using those successes as launch pads for your next round of applications. When you earn a scholarship, the money is not the only reward you receive: the connections can be even more beneficial. Similarly, awards give you solid proof of how great you are, which you can throw on résumés and mention in job interviews.