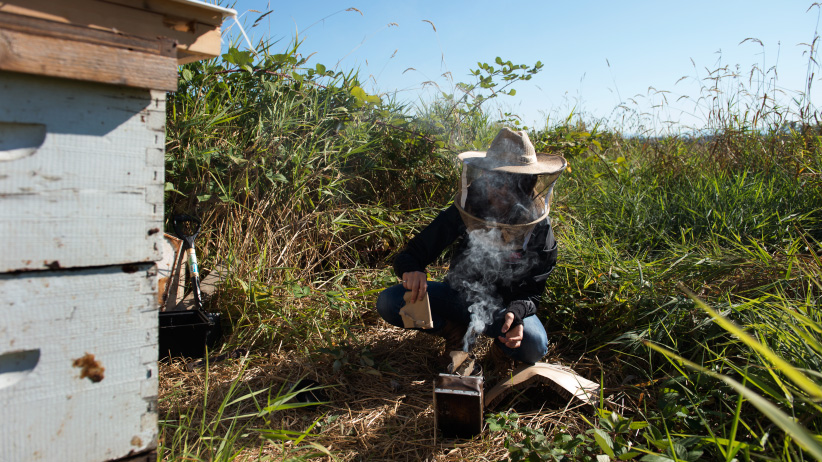 Oldooz Pooyanfar never expected to conduct her research dressed in beekeeping gear. She’s an engineer, after all.

But doing her master’s degree at Simon Fraser University led her to a co-op project designing a monitoring system for honeybee hives. As part of her degree in mechatronics systems—which brings together mechanical, electrical and software engineering—she soon found herself working with new research subjects. As she learned the challenges of her fieldwork, Chilliwack, B.C.-based beekeeper Peter Awram helped her with the basics of bee-handling. “The bees aren’t that hard to work with,” she says. “But when you open the hive [without realizing] you should have a smoker, they come at you really hard.”

Pooyanfar’s system helps track bee colonies through sensors placed in the hive that gather data on sound, temperature and humidity. The results, accessed remotely, can be used to monitor the bees from anywhere—but Pooyanfar had to figure out how to stop the bees from sabotaging the whole project first.

“It’s a challenge because the bees are not very welcoming to the equipment,” she laughs. “The first few times I set them up, the bees completely destroyed my sensors. I don’t know what they do, but every time I would place the sensor, I would go back in a couple days and everything is ruined and I have no data.”

After a lot of trial and error—and many trips to the lab for repairs—Pooyanfar says the system is now recording constant, real-time data, which she hopes could become a resource for understanding and tracking bee behaviour and health. “I finally got to this point where I was like, ‘I’m getting data, it’s reliable, it’s continuous—so now what can I do with it?’ ”

The system could help beekeepers track their hives from afar. That would eliminate some of the work involved in manual monitoring—for large companies, that can mean visits to thousands of hives spread across an entire province. Pooyanfar is conducting her research in partnership with Worker Bee Honey, which has 5,000 hives. 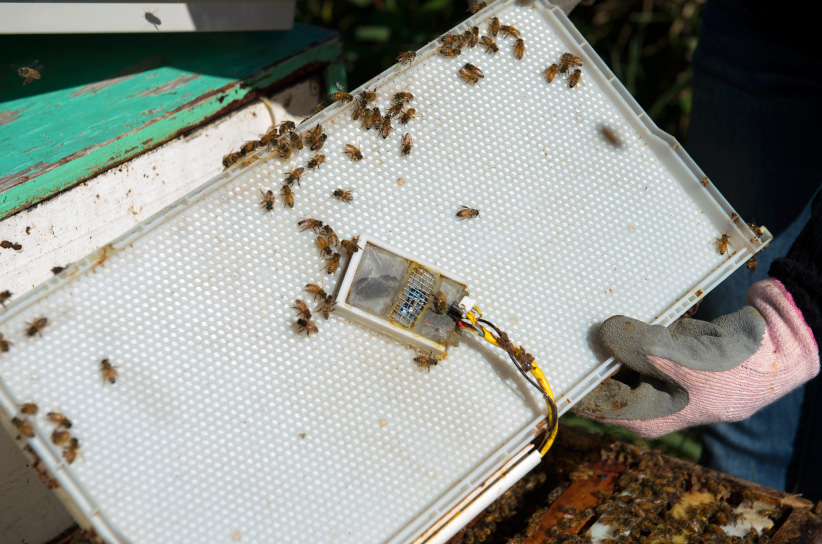 Pooyanfar shows a monitoring system at her research hive in Surrey, B.C. (Photograph by Taehoon Kim)

The remote monitoring system can’t entirely replace the process of checking a hive in person, but a constant feed of data could help beekeepers chart patterns in bee behaviour and respond to signs that the bees are in trouble before it’s too late. Tracking data like the volume of sound coming from a beehive can help detect potentially disastrous problems at the hive, like the death of the queen bee or an infection that’s spreading and killing the colony.

Pooyanfar says she’s already heard from people in the beekeeping industry who are interested in using the system. But, while she is working on a prototype, the project is still some way off from production. She hopes that deploying her technology on a wider scale could help collect data that would provide aid in the search for solutions to colony collapse disorder—the little-understood and dramatic loss of western honeybee colonies that beekeepers first noticed in the mid-2000s.

The cause of the decline is still not clear, but it can have consequences for agriculture when there are fewer bees to pollinate crops.

Pooyanfar’s master’s research is coming to an end and she’s planning to leave the project once she finishes her degree, but she and her supervisor are making plans with the beekeeper to secure future funding and find a new student to continue in her place. Pooyanfar is now focusing on collecting as much data as possible; there’s reliable data coming from the three hives she works with, and many more will need to be monitored over a long period for the system to work. For the technology to successfully recognize patterns and note changes in a hive, it will need a long-term commitment to analyzing those results. The project “needs more brains on it” from a variety of disciplines, Pooyanfar says, but she hopes she’s taken a step toward ensuring healthy hives in the future.

“As an engineer, it’s one of those things: ‘What can I build that’s for the betterment of human society and fulfills me personally?’ I like this project because it’s something that you can see the end result with,” she says.