How a career in hearing loss can break Canada's sound barrier

We highlight three college programs in audiology, sign language and the psychology of hearing 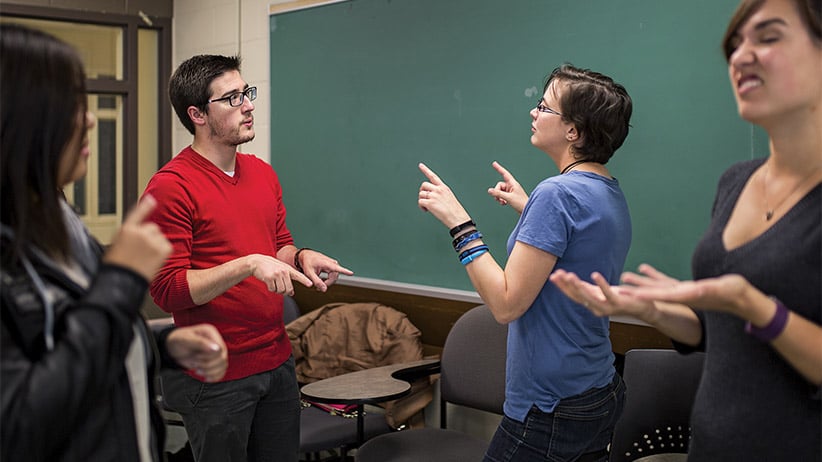 Bend an ear: Audiology programs train specialists to give deaf Canadians a voice in courts, banks, hospitals and interviews (Photograph by Nick Iwanyshyn)

Some say hearing is the sense that connects us most of all. Being blind may separate us from things, but being deaf separates us from people, according to author Helen Keller, who was both.

Yet hearing loss is growing as the Baby Boom ages and the magic little hair cells of their inner ears get too stiff to pick up higher pitches. That silence feeds isolation and can even speed up dementia. By age 65, one in three Canadians has lost some hearing. By 75, it’s almost half. Some three million Canadians already are hard of hearing and 300,000 are fully deaf, and these numbers will only climb as the ranks of seniors explode over the next 20 years.

If hearing loss poses a national health challenge, it’s also a chance for a new generation to step up and help, especially as provinces beef up the rights of the disabled to get the support they need from the classroom to the board room. Here we highlight where a master’s degree in audiology can lead, a community college program in sign language, and psychological research into the mysteries of hearing itself.

George Brown College has just launched Canada’s first bachelor degree in American Sign Language interpretation (until now, they’ve all been three-year diplomas). It’s partly to raise the professional bar, as countries from the United States to Australia have done, but it’s also because there’s such a shortage. Nearly one in three requests for an ASL interpreter in Ontario is turned down because there is no one to ﬁll it.

The new four-year honours bachelor of interpretation (American Sign Language—English) will tackle the nuances of a career that gives deaf Canadians a voice in the world: in court, job interviews, banks, and hospitals.

“Interpreters aren’t just the buddy who goes to the doctor’s appointment with you; we’re the communication bridge between two languages so all parties can communicate in their ﬁrst language,” said program coordinator Rhondda Reynolds.

To qualify for one of the 25 spots George Brown will offer each year, students must have had at least 200 hours of previous ASL instruction. For those who need extra prep, George Brown offers a one-year certiﬁcate program.

A degree in audiology can take you surprising places—like ﬂy-in schools in Canada’s Far North. Two veteran audiologists who graduated from Western University’s program have won a $300,000 prize for dreaming up a way to help Inuit students across Bafﬁn Island (Qikiqtaaluk).

The teacher wears a Madonna-style microphone that helps all children hear more clearly. The simple system targets a complex problem, since an estimated one in ﬁve northern students has permanent hearing loss from untreated middle-ear infections. This is a common childhood illness, but when you live in overcrowded conditions, sometimes in substandard housing, in a ﬂy-in community with one audiologist for every 45,000 people—and specialists who are a pricey plane ride away—it’s hard to keep infections at bay.

Yet the better children hear a lesson, the better they learn—especially if English is not their ﬁrst language—and many Nunavut students speak Inuktitut at home, says York University audiologist Pam Millett, who graduated from Western University with both a bachelor of science and master’s in clinical science. She then earned a doctorate in education from York University, where she runs a one-year program for teachers who wish to work with the deaf. Millett is part of the Better Hearing in Education for Northern Youth (BHENY) project that’s bringing microphones, tower speakers and tech training to “amplify” northern learning.

“The link between hearing loss and literacy is undisputed,” says Millett, “and enhancing listening in a class has been shown to be hugely helpful to all kids.” Sponsored by the Rotary Club, the project will roll out in 13 communities after winning the hefty 2016 Arctic Inspiration Prize, which funds wellness projects in the North.

The need to improve the education of Indigenous children is more timely than ever after the challenges unveiled by the damning Truth and Reconciliation Commission report, says BHENY project leader Lynne Powell McCurdy, an award-winning audiologist in private practice in Guelph, Ont. McCurdy has a bachelor of arts in psychology, a bachelor of science in communications disorders and her master’s in clinical science at Western University in London, Ont.—and her doctorate in audiology from A.T. Still University in Missouri. “This is a gap in service we need to bridge, and audiology is a great career path for such rewarding work.”

Master’s programs in audiology are offered in English at Western University, Dalhousie University in Halifax and Vancouver’s University of British Columbia and in French at the University of Ottawa and Université de Montréal.

Often small programs (10 to 20 students) with ﬁve to six applicants per spot, they typically require students to have undergraduate credits in developmental psychology, statistics, anatomy, physiology or neuroscience and in some cases at least one course in either math, physics or engineering science, as well as some social sciences.

Believe it or not, that garage band may keep your hearing sharp when you’re old. It keeps you paying attention to sound—which may be a use-it-or-lose-it skill. Same with your choir practice, orchestra rehearsal, or piano lessons.

Psychologist Benjamin Zendel of Memorial University of Newfoundland tested 200 people for how well they can follow a conversation as background noise grows—something many struggle with as they age. But amateur musicians aced the test.

“It turns out the average musician at 70 processes speech over noise as well as the average 50-year-old [non-musician],” says Zendel, who holds the Canada Research Chair in Aging and Auditory Neuroscience. But the advantage comes from making music, he emphasized, not just listening to it. The psychologist, whose hearing research is being done within Memorial’s faculty of medicine, focused on amateur or hobby musicians who started music training before the age of 16 and still make music ﬁve to 10 hours a week.

“We’re just starting to understand the mysteries of how we hear, how the brain processes sound and separates a friend’s voice in the coffee shop from the cups clanking and car horns even though these sounds all hit the ear at the same time,” says Zendel, who earned a B.A. in psychology at the University of Calgary before getting his master’s and Ph.D. in psychology at the University of Toronto.

Students keen on this kind of research could follow Zendel’s path by studying psychology, or the related ﬁelds of cognitive science or neuroscience, which some universities offer at the undergraduate level. Undergraduate biomedical science can also be a gateway to the study of hearing, as can the ﬁelds of audiology, speech pathology, communication science, psychology, linguistics, geriatrics, music—Zendel has hired researchers from almost all. Expertise in hearing also can lead to jobs in schools, hospitals, private practice and product development. He said a graduate of Montreal’s International Laboratory for Brain, Music and Sound Research was hired recently by Google Music.

Zendel’s next step is to persuade more North Americans to make music, no matter how tone-deaf they think they are. “Taking part in making music improves social bonding, helps children cognitively and now seems to help the elderly,” says Zendel, who is setting up Newfoundland’s ﬁrst research lab in cognitive aging and auditory neuroscience.

“We can’t all be Yo-Yo Ma, but everyone can sing a bit or hit a drum,” he says. “It’s a uniquely human activity.”