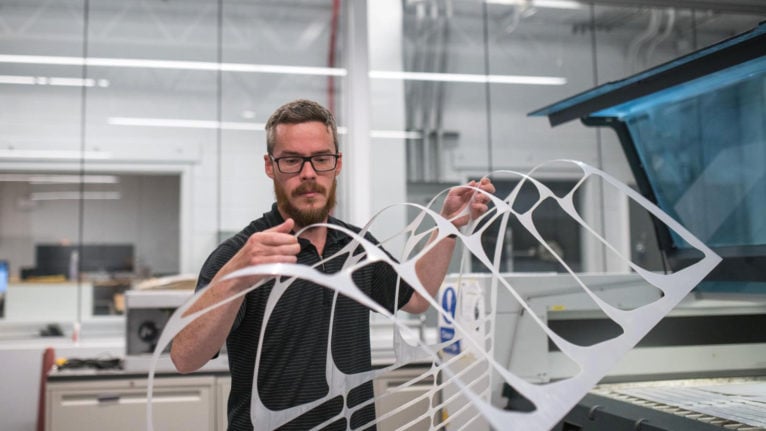 Colleges pride themselves on training professionals with the practical skills needed to tackle tough problems. It’s no surprise, then, that they responded to COVID-19 with practicality and innovation. Here are four creative, pragmatic initiatives out of Canadian colleges, each of which tackled different aspects of the pandemic.

Laser-cut shields by the thousands

In late February, Matthew Zeleny—a former student of Camosun College in Victoria who’s worked in its applied research department for a decade—was browsing an online forum where health-care professionals were discussing the danger of a PPE (personal protective equipment) shortage. Zeleny had a brainwave. “I noticed that many open-source designs for face shields used 3D printers, but when I looked into how long these shields took to make, as well as the overall cost, I started thinking that a laser-cut flatpack design could be produced and shipped more efficiently,” he says.

A 3D printer, which normally makes the buckle that holds a face shield in place, can produce between six and 20 per day. But in Zeleny’s design, the entire shield is made with a laser cutter. Rather than 3D-print the buckle from raw materials that could soon become difficult to source, Zeleny uses a laser cutter to make this component from the same readily available, durable and easy-to-clean PETG (polyethylene terephthalate glycol-modified) material as the shield itself. Even with Camosun’s relatively small manufacturing facilities, Zeleny’s new method could pump out 90 shields per hour.

“The biggest challenge was the fit,” says Zeleny. “I went through three iterations to make sure the clear plastic component didn’t flatten against the face and the buckle stayed secure. But it was all pretty quick, and we were able to start producing them around March 14.” The team—which consisted of about half a dozen people, including Zeleny and a few other former Camosun students—worked with Camosun industry partner AP Plastics, which is also based in Victoria, to hammer out the details of the design. Since the campus was closed, current students—who would normally participate in an applied research project such as this—couldn’t be involved.

In a matter of weeks, the project went from light-bulb moment to full-scale production. With AP Plastics, which took over some of the manufacturing load, the team produced about 9,000 face shields. They were promptly approved by Vancouver Island Health and deployed at more than a dozen facilities across the province, including Victoria General Hospital. And to boost the idea’s impact to its maximum, Zeleny decided to make the design open-source—that is, freely available for download.

“Island Health was so happy with the design that they asked another company in the North Island to use it to furnish other facilities in the area,” says Richard Gale, director of Camosun Innovates. “We’ve had inquiries from as far away as Louisiana, Scotland and Australia to use the open-source design.” A week after Zeleny started producing masks at Camosun, manufacturing shifted to AP Plastics’ facilities, which bumped up production speed to around 130 shields per hour. Another 45,000 shields were produced for Island Health at the end of June.

Now, the team has set its sights on addressing a potential shortage of N95 masks. Zeleny is working on what might best be described as an ultraviolet oven, about the size of a mini-fridge, to sterilize the masks on a small scale. (Right now, sterilization facilities are only available on mainland B.C., and unsterilized masks can only be used once.) “We’re hoping that this design, which will also be open-source, will be useful in clinics that can’t necessarily make repeated purchases of N95 masks, like some remote northern communities,” says Gale. The project is currently in prototype phase but has already garnered significant interest from local health authorities.

Doctors and health-care authorities need reliable, comprehensive information to make big decisions about how to treat and prevent illnesses—especially during a pandemic, when everything moves at breakneck speed. They rely on a process called systematic review (SR), in which thousands of peer-reviewed studies on a particular topic are collected, analyzed and summarized to glean the best available evidence. Unfortunately, SRs normally take about six months to complete, since they require manually coordinating researchers—that is, one research supervisor assigning researchers to studies—to analyze thousands of papers.

A software research project launched in 2017 at Algonquin College in Ottawa speeds up the process from six months to about two weeks. Designed by a team of students and researchers, InsightScope is a user-friendly system that updates in real time so researchers can instantly see what still needs to be reviewed. It takes over much of an SR’s manual organization and allows researchers, health-care professionals and scientists to collaborate online.

“I applied to work on the project in 2017, when I was a computer engineering student at Algonquin,” says Sanket Patel, who’s worked in the software industry since he graduated in 2018. “I got an interview through an online portal that links students with Algonquin industry partners, which in this case is the Children’s Hospital of Eastern Ontario [CHEO].”

More than a dozen Algonquin students have worked on the project since then, and at the time of writing, it’s been used to conduct four COVID-19-related SRs, including one on the efficacy of UV light to decontaminate surgical masks. (It turns out that this can work, which is great news for Zeleny’s ultraviolet oven.) The SR had 20 reviewers collaborating online to analyze about 2,000 research papers. A review of that magnitude would normally take at least a month to complete, but with the help of the software, it took only three days.

A different kind of front-line defence

In early March, Humber professor Francis Syms—who teaches in the college’s protection, security and investigation program—sent an email to students in his graduating cybersecurity class. He asked if they wanted to join an international COVID-19-focused cybersecurity coalition. The coalition, made up of about 2,000 cybersecurity professionals from around the world, shares real-time intelligence to dismantle pandemic-related cyberthreats. About 15 of the Toronto college’s students signed on to the project and got to work.

“I had to give them a prep talk at the beginning. I said, ‘Look, you’re going to be working with a seasoned group of professionals, there’s a certain code of conduct you should follow and these are relationships you may want to leverage later in your career,’ ” Syms says. “Based on that conversation, they would decide whether they wanted to be a part of it. Some students played a passive role, more just listening, and some would do research and provide samples of threats.”

From phishing scams targeted at individuals to attacks on hospitals and governments, cybercriminals have been especially active during COVID-19. A May report from the Communications Security Establishment (CSE), a Canadian intelligence agency, noted that it had taken down more than 1,000 websites that imitated Government of Canada websites. They were mostly related to economic stimulus programs like CERB, attempting to defraud people out of their SIN numbers, banking information and other sensitive data. The report also said that Canadian health-care facilities, including hospitals, are being targeted by ransomware, which could hold critical information hostage in a time when it’s needed most.

“All these security professionals, from people working at corporations like Microsoft and security firms to researchers in the public sector, were sitting at home wondering how they could help. That’s kind of how this formed,” Syms says. “It allowed my students to engage with professionals they probably wouldn’t otherwise have had access to until much later in their careers.”

On a morning in early March, Kathy Kennedy—a long-time ER nurse and BCIT graduate who also teaches in the Vancouver school’s emergency nursing program—arrived at her office to find the phone ringing off the hook. Local health authorities, attempting to prepare B.C. hospitals for a wave of COVID-19, inundated her with calls asking for help training nurses.

“We work collaboratively with our health authorities, so it was natural for them to come to us,” Kennedy says. BCIT’s nursing programs are specialized in “upskilling”—the college offers 11 advanced certificate programs to registered nurses, ranging from neonatal and perioperative nursing to critical care. The problem was that these programs take up to two years to complete, and the threat of a COVID-19 wave that could overwhelm hospital resources was immediate. Health authorities wanted a fast-track course to equip nurses with the skills they would need to better assist colleagues in an ICU team.

“I met with the head of the ICU and the emergency programs first, since I knew these would be relevant areas, and we put together an outline to bring back to our health authorities,” Kennedy says. “After they gave us the go-ahead, I got a team of 25 together to write the course. It would normally have taken us six months to do, but we did it in six days. It was just crazy. I said, ‘Everybody empty your pockets—what have you got, what information can we pull together, what’s the baseline knowledge we can give people to get through this?’ There were some long days and late nights.”

The program—which is available online for free—consists of five modules (each of which takes between 24 and 45 hours to complete) that cover skills specific to a COVID-19-related emergency, including how to interpret cardiac rhythms, how to operate a mechanical ventilator and how to monitor for shock states like cardiogenic and hypovolemic (fluid loss) shock, which are major concerns with COVID patients. Nurses could choose to take some or all of the modules, based on their levels of experience, but Kennedy says nurses weren’t the only ones who ended up taking the program—physicians, respiratory therapists and other health-care workers also took the course.

Since its release in April, 10,000 learners—mostly in B.C., but also in Alberta, Ontario and parts of the United States—have taken the course. “It’s received phenomenal feedback. When I go into the hospital now, I keep running into people who say they’ve taken the course,” says Kennedy. “We’re all incredibly proud that we were able to contribute.”

This article appears in print in the Maclean’s 2020 Canadian Colleges Guidebook with the headline, “Made in a college; used in a national crisis.” Subscribe to the monthly print magazine here.