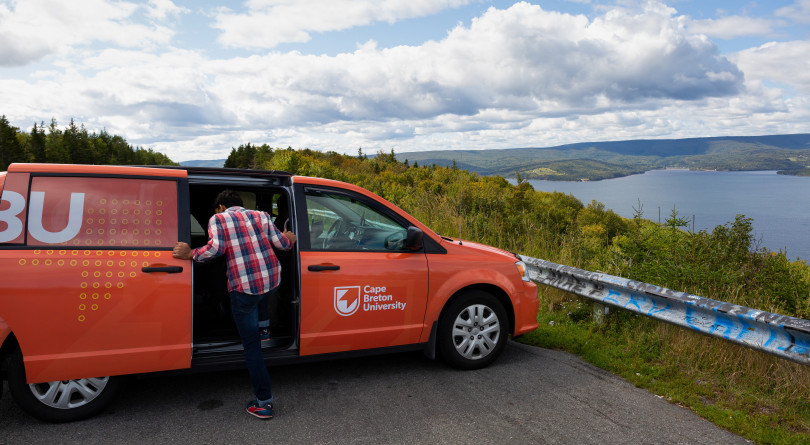 A CBU shuttle stops at St. Ann’s Bay on a two-hour drive to Keltic Lodge (Photograph by Steve Wadden)

Moulick pilots the minivan up the tight curves of the Cabot Trail like a local. Since late July, he has made the trip several times a day, several times a week. In many spots the road hugs the edge so close a passenger could brush her fingertips on the guardrail. When a car driving down the mountain crosses the centre line, Moulick reacts quickly, avoiding a collision. “Sorry!” he says, as his passengers sway with the van’s movement.

He’s unfazed—a cautious driver confident in his skills. This has happened to him before.

“At home, we drive on the edge. There are guardrails, but we have to drive just on the edge, and when you turn you have to pay close attention,” he says. Home for Moulick and the four other passengers in the van is originally India, but since May, it’s been Cape Breton University in Sydney, N.S.

Over half of Cape Breton University’s (CBU) 5,000 students are international students. Indian and Chinese students make up the bulk, but students also come from 40 other countries, including Vietnam, Bangladesh, Egypt and Sri Lanka.

These students are headed to Keltic Lodge, a world-renowned hotel and resort nestled in Cape Breton Highlands National Park. In late July, they joined a two-year pilot project the university founded to address two problems.

The first is that CBU’s sprawling campus is between (but not in) Nova Scotia’s second-largest city, Sydney, and the town of Glace Bay. Students seeking employment face tough competition for the few part-time jobs on campus or in the neighbouring residential areas. The second problem, out-migration, is common to rural areas countrywide. As young people from small-town Cape Breton head to Alberta and Ontario for work, seasonal employers—particularly in the tourism industry—seeking minimum-wage employees scramble to hire. The solution to both issues is a small fleet of minivans.

The pilot project emerged from a strategic planning session held by the university.

“It came up time and time again that there’s a shortage of labour,” says John Mayich, director of student affairs at CBU. “People think Cape Breton has a high unemployment rate, but in these outlying communities it’s hard to find people who are willing to take on part-time employment. A lot of the young people have left the area.”

RELATED: What does it mean to be working class in Canada?

The program started this past summer with 24 students and 12 employers. By the end of the first month, it had grown to 55 students, 15 employers and 13 drivers, also mostly students. The workplaces are all over the island, some up to 150 kilometres away. The university and the Atlantic Canada Opportunities Agency (ACOA) contributed $306,314 and $350,000 respectively to cover all of the program’s costs.

Kent MacIntyre, the program manager, says he hears daily from businesses who want students, but the vans already operate from 5:30 a.m. until 1:30 a.m. “I’d love to say I can send them some students, but we’re full up.” He says the year-end report will include a recommendation to add more vans.

While the idea was ready to put into action in spring, the funding didn’t come through until July. Within a week, Mayich says, the program purchased and painted four Dodge Caravans (CBU green and orange) and received over 200 resumés from interested students and calls from dozens of employers looking to hire in Victoria, Inverness, and Richmond counties. While the program is open to all students, its focus is CBU’s large international-student population, who have a particularly hard time finding work because they don’t have a Canadian work history or a car. 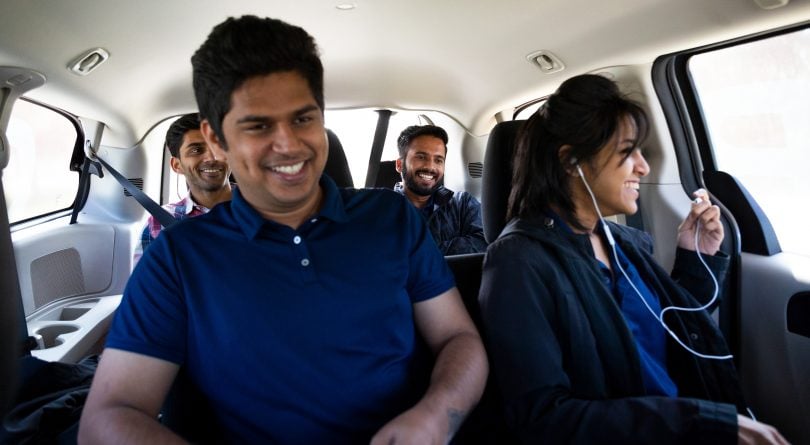 Anusree Sreenath left her small town in India for the first time to come to CBU. She chose CBU’s business management diploma because of Sydney’s small-town vibe, which she had heard about from friends who had done exchanges at the university. Her ultimate goal is to stay in Canada when she finishes her two-year supply chain management diploma. “Nova Scotia makes it easier to settle than Ontario,” she says.

The students flew to Sydney via Toronto when they arrived in Canada in May, so they didn’t see the awe-inspiring coastal beauty that is highland Cape Breton until work started in July. “People come from all over the world to see this,” says Singh. “We see it every time we come to work.”

Halfway through the two-hour drive from the university, Moulick pulls the pumpkin-orange van into a look-off for a photo op. Craggy cliffs and the dark blue water of St. Ann’s Bay surround tree-covered hills. Moulick points to a white spot in the distance. “That’s the Englishtown Ferry. We’ll be on it soon.” In addition to driving, he’s also a keen tour guide.

“Our talent pool is pretty shallow,” he says of the town of 1,925 people and 625 dwellings. “We have residence accommodations on site, but it’s not near enough capacity to house the number of people we need to run the resort. We’re constantly short.”

Because it’s in a national park, the resort, which opened in 1951, long ago ran out of space to build. “When I heard about this new program, I nearly put my head through the ceiling, because it totally fits. It is exactly what we were looking for,” he says. 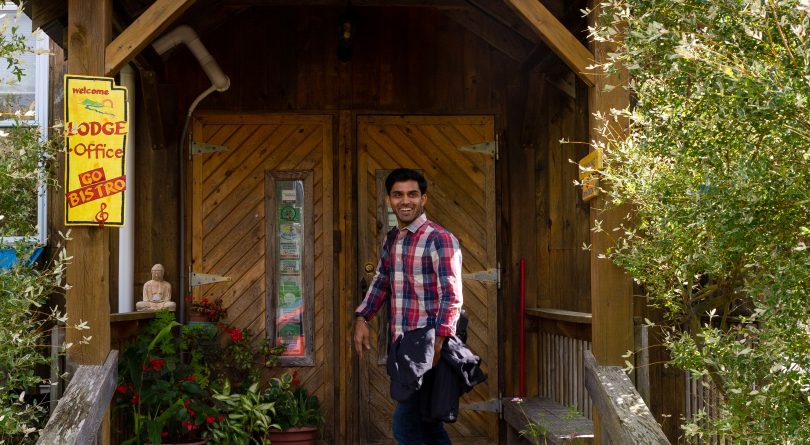 Patel at his job. (Photograph by Steve Wadden)

Hurd says on-boarding the 15 students working at the Lodge was less thorough than he’d have liked. “We only started in late July, so our ability to provide a proper training and orientation program was limited. We were so excited we were saying, ‘Sign here! You start now! You’re in!’” he says, miming the thrusting of a contract at a potential employee. “I’m really excited about the opportunities for next year.”

He says he hopes to see the program continue past the two-year mark and hopes the university will re-evaluate some aspects. Chief among them: start times for the school’s hospitality programs. School runs from September to May, but the island’s tourism season, bolstered by the Celtic Colours International Festival in October, is still in full swing until November. Hurd says changing the school’s start and end dates would allow more hospitality students into the work program.

CBU is looking at solving the scheduling snag. In August, the university announced the launch of its World Tourism Institute, a new program that will encourage more collaborations between local industry and the university to expand the tourism sector. At launch, the university confirmed it plans to re-evaluate start and end dates for the university’s hospitality programs.

Mayich also wants to see the program continue. He says he ultimately hopes the private sector will take it on. During the pilot, CBU will collect data from employers and students about what they’d be willing to pay to participate so anyone who takes over the project will have all the data needed to be successful.

“The big, big hope is that we’ll see some of this trickle down into positive net in-migration as opposed to out-migration,” says Mayich. “Unfortunately, I think it’s been ingrained in Cape Bretoners that there’s no opportunity. There is; it’s just that you have to make the opportunities. No one is going to hand them to you.”

This article appears in print in the 2020 University Rankings issue of Maclean’s magazine with the headline, “Two problems, four minivans.” Order a copy of the issue here. Subscribe to the monthly print magazine here.