How one York professor is bringing Ojibwe culture to the classroom

Maya Chacaby uses Ojibwe storytelling, and a card game, to teach more than the language 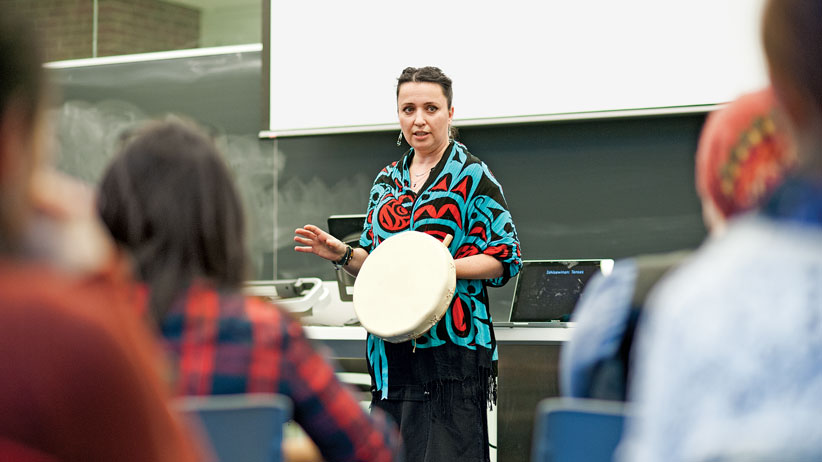 The lights are partially dimmed in the classroom at Glendon College, a small, York University campus in north Toronto. It’s dark outside, and Maya Chacaby stands above a medicine wheel—a round symbol painted in black on a square of canvas—laid out on the floor. It is only the second class of the school year, and she already has her students speed dating in Anishinaabemowin, or Ojibwe.

“Giwiidige na?” (Are you married?) one student asks, pronouncing each syllable the way it is written. “Gaamashi niwiidigesiin,” (No, I am not yet married) the other student responds fluidly.

Chacaby started the speed-dating exercise about 10 years ago. When she was at university, she always disliked how students didn’t have the opportunity to talk to each other during lectures.

The exercise is an icebreaker to loosen up her students—the majority of whom are not Indigenous—and get them talking. But her main method of teaching revolves around a card-based adventure game she invented called Biskaabiiyaang, which means resurgence, a direct reference to her mission to recover her language and her culture.

Every student receives a passport, in which they can record the levels of language proficiency they acquire on each quest. Based on the card game Magic: The Gathering, Biskaabiiyaang tells a story set on Turtle Island (what Indigenous people call North America) about a beautiful world bound together by the Anishinaabemowin language.

The seven beings that protect the world disappear when it is invaded by vicious “linguicidals,” and students must collect pieces of the broken language to ensure the seven beings return. The quest takes the entire school year, and transitions from language instruction in the fall to writing in the winter.

While her students grapple with her mother tongue, Chacaby is on her own quest to preserve the language she estimates is spoken by just 9,000 of Ontario’s 13.6 million citizens, and most of those over the age of 65.

“I’m not optimistic, because the social environment and pedagogical structures are not changing,” says Chacaby, who has been teaching Ojibwe since 2006 on summers off from her undergrad in Aboriginal studies at the University of Toronto. After a master’s degree in adult education and community development at the Ontario Institute for Studies in Education, she is now doing her Ph.D. in social justice education at OISE.

Growing up in Red Rock First Nation and Thunder Bay, Ont., like many of her generation, Chacaby did not speak Ojibwe. Indigenous parents believed their children would have more opportunities and face less discrimination if they spoke English. When she moved to Toronto in 1994, her determination to learn Ojibwe led her to Alex Jacobs, an elder at the Native Canadian Centre of Toronto.

Chacaby was the 13th of 14 students he has taught to speak fluent Ojibwe. The prominent cultural leader has devoted the last 25 years of his life to preserving the language. Now 78, he is still teaching, though turnouts below 10 are common—even though his classes are free.

At one of her Ojibwe-language camps, Chacaby met a man no one else seemed to know who offered her a pack of tobacco. “Aanii, Ian ndishnikaaz,” she remembers him saying (“Hi, my name is Ian”). At the end of the three-week session, he approached her again, this time revealing he was Ian Martin, then coordinator of the linguistics and language studies program at Glendon, a small, bilingual, liberal-arts college. Martin, now an English professor, offered her a job and gave her the freedom to design her own program.

The problem with learning Anishinaabemowin is that everything is alive in Indigenous culture. It is a descriptive language, with little use for nouns. Rather than using a permanent label, it describes a thing’s relationship with the universe. When European linguists translated Ojibwe they disrupted the meaning of its nouns by dividing them into animate and inanimate objects. Bridging this socio-cultural divide has been Chacaby’s biggest challenge.

Chacaby believes that the values instilled in her class can create social change and shift attitudes toward the language. “It’s never going to be what it was before, but we’re returning to that way of knowing, a way of doing things that is Anishinaabe.” She has taken everything her elders have taught her, and her own taste for fantasy games, and turned it into something that interests a new generation. “I could sit here and teach them [the language] the way my elders taught me, but they wouldn’t learn a single thing,” Chacaby says.

Martin, her Glendon College colleague, adds: “It’s not just games. It’s a game with a purpose.”

In June, the Truth and Reconciliation Commission (TRC) released the summary of their final report on the generational trauma residential schools have inflicted on Indigenous communities. It released a series of recommendations on the path to reconciliation, and several of those recommendations related to the preservation of Indigenous languages, and urged “post-secondary institutions to educate teachers on how to integrate Indigenous knowledge and teaching methods into classrooms.”

“I’ve always heard Indigenous languages are some of the toughest to learn. Turns out Anishinaabemowin is easy to learn, it just depends on how you teach it,” says fourth-year student Sienna Warecki. Warecki used to be part of what she calls the “unfortunate majority of non-Indigenous Canadians” that care very little about the plight of Indigenous communities. She now plans to pursue a master’s degree in Indigenous studies, though she is unsure where she will apply.

When students walked into Chacaby’s class at the beginning of the semester, they were not surprised by her creativity. “People know her at Glendon for the things she does,” says Aleksandar Golijanin, a third-year student. Students floated a petition in 2013 demanding an intermediate Ojibwe course with no success.