The university's picket lines may have disappeared, but the animosity on campus shows no signs of fading away 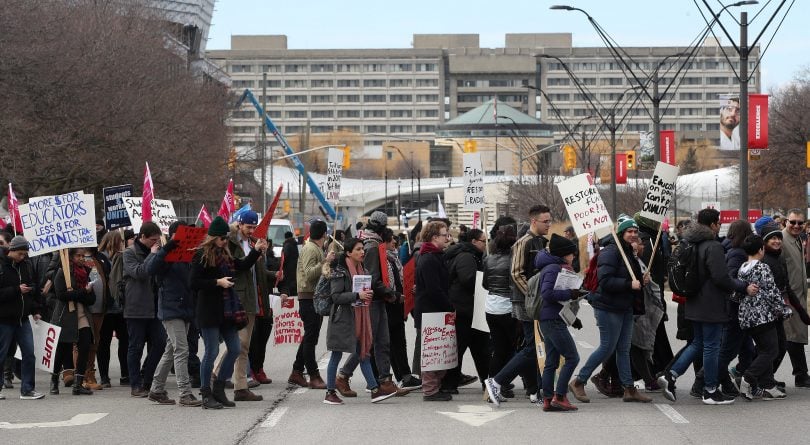 After 142 days, the strike at York University was ﬁnally over. This was the longest strike in Canadian university history, and there was no shortage of drama—from students staging a sit-in in the senate chambers, to union members protesting at president Rhonda Lenton’s house, to the administration threatening striking workers with reprisals. Tensions escalated over four months until the new Progressive Conservative provincial government passed back-to-work legislation on July 25. However, while the picket lines are gone, the animosity certainly isn’t.

The striking members of CUPE Local 3903 included sessional faculty and teaching assistants. Many still hadn’t signed their contracts by the time the new semester began, Arend adds. “There was a substantial number of lecturers and TAs who have had almost no time to prepare,” he says. “There were also students who went through the strike frustrated because they went through four months of a strike and are trying to either get back the courses they had to drop, or figure out remediation.”

READ MORE: York University: The student who struck out twice

Students indeed feel frustrated, particularly as memories lingered from a similar labour disruption in 2015. “There should not have been two strikes in four years. This one should not have lasted four months,” says Claire Bosnich, a fourth-year screenwriting student. “It’s just tiresome for the students.”

To prevent the loss of the academic year, the administration allowed students to defer their courses until the fall semester. This meant course instructors could potentially end up marking two semesters’ worth of courses simultaneously. Many students have completed the winter term and are just waiting to get their grades, according to provost Lisa Philipps.

Students were also permitted to drop a course without penalty and receive a credit toward a future class. Many students are now experiencing the fallout from this option, as required courses are filling up faster than usual. “I’m not able to take some of the classes I really wanted to, so I had to settle,” says Victoria Silman, a fourth-year professional writing and political science student. “I’ve also spoken with other students who have had similar problems, and their only solution was to go to the classes and ask the professor for permission to enrol. That isn’t a very effective solution because you often come across professors who can’t make an exception because the class genuinely is too full.”

RELATED: York University on strike: Why it keeps happening again and again

The labour disruption also proved fractious within the student body itself. Some backed the striking faculty, but others, concerned by the uncertainty, created a Facebook group called, “Students Against Strike.” Stephan Chung, who created the group, says the York Federation of Students, which represents undergraduate students, was too sympathetic to the union’s position.

Ultimately, it was Premier Doug Ford’s new government that ended the strike and forced the sides into binding arbitration over lingering issues like job security. During the spring election, only his party promised to put an end to the strike, a decision that influenced students’ votes.

“They seemed like our only ally in this situation,” says Julian Hoffman, a fourth-year screenwriting student. “I will say it is quite unfair that union members were forced back to work after nothing was resolved, but at what cost could they be allowed to continue holding us hostage?”

Despite York’s poor track record of avoiding labour disruptions, provost Philipps is optimistic the administration and union will be able to reach an agreement in 2021, which is when the next round of bargaining is due. Arend offers a much more pessimistic view: “Since most of the serious issues for our side were unresolved, I don’t expect a different outcome. I would be shocked if we weren’t on strike in three years,” he says.