How to get a job at Vice, Google, Ubisoft and Evenko

Leaders at companies where kids want to work tell us what they look for on a resumé and how to stand out in a sea of applications.

The stakes have never been higher. Whether they beg or borrow, parents or kids are on the hook for at least $24,000 for a four-year degree in most provinces. No one can afford a misstep, and a career is an elusive thing in this era of part-time work and contracts. We asked these business leaders a simple question: How do you get hired in this day and age? (Watch their panel here.) 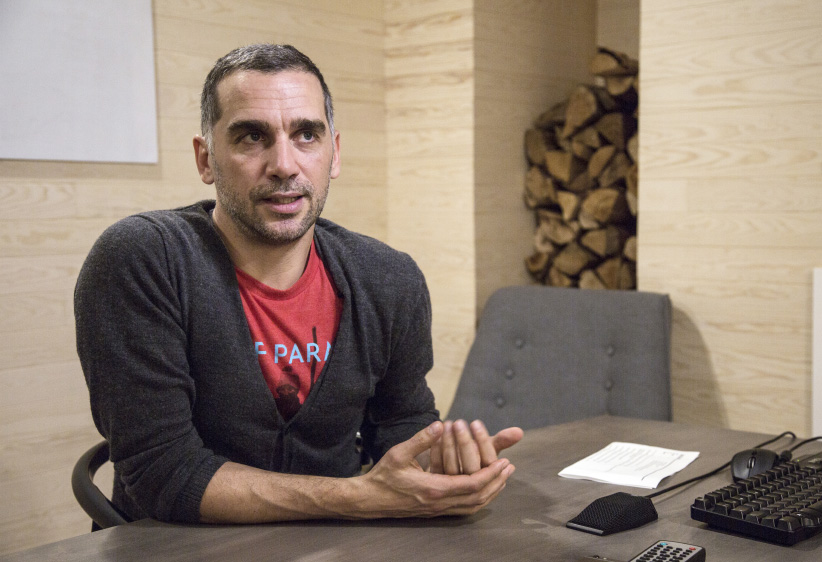 Ubisoft, the gaming company that let Assassin’s Creed into your home, has more than 300 job descriptions, including animation, computer programming and motion capture. And Cédric Orvoine wants to hire the “1337”—a.k.a. elite—for every one of them. “We want people who want to excel in their craft, that want to learn their craft and be the best out there,” says Orvoine, the VP of communications and human resources for the video game company’s Montreal studio, where 2,700 people contribute to games like Tom Clancy’s Ghost Recon and Just Dance.

Ubisoft scouts for next-gen talent at Quebec schools, and holds an annual Game Lab, where company experts mentor university teams that make a playable 3D video-game protoype in 10 weeks. Winners in design, art and programming are chosen by a Ubisoft panel, and the company hands out $22,000 in scholarships and—that holiest of grails—10 internships. Some 130 students on 17 teams from 11 universities took part in 2016.

“We’re trying to get involved and give skills to students to demonstrate and show how great they can be,” he says.

Ubisoft, founded in France, opened the Montreal studio 19 years ago when it wanted a foothold in the North American market. Back then, the only job prerequisite was a love of gaming. Now “we’ve become more and more demanding in what we’re looking for and it’s also because the market is expecting a lot from us as well.”

Gamers want new versions as fast as they can buy them; graphics as crisp as possible and virtual worlds as realistic as can be. Between April 1 and Sept. 30, 2016, the company hired 325 people at the Montreal office alone.

So, how do you get a job there? “You call me,” Orvoine jokes. But seriously, “We want to see concrete things. We want to see projects that you worked on; we want to see a demonstration of your animator skills, of your [modelling] skills. We want to see how you can code. Basically, show us what you can do with real stuff.”

How Orvoine got his job at Ubisoft:  When Ubisoft opened in Montreal in 1997, Orvoine was still studying French literature at the Université de Montréal, but he was set on getting a job there one day. “I was like, ‘This is the one and only company I want to work for, because their ambitions are to be the best in the world in what they create.’” Call it serendipity—he was recruited by Ubisoft while working at a Montreal communications agency seven years later. 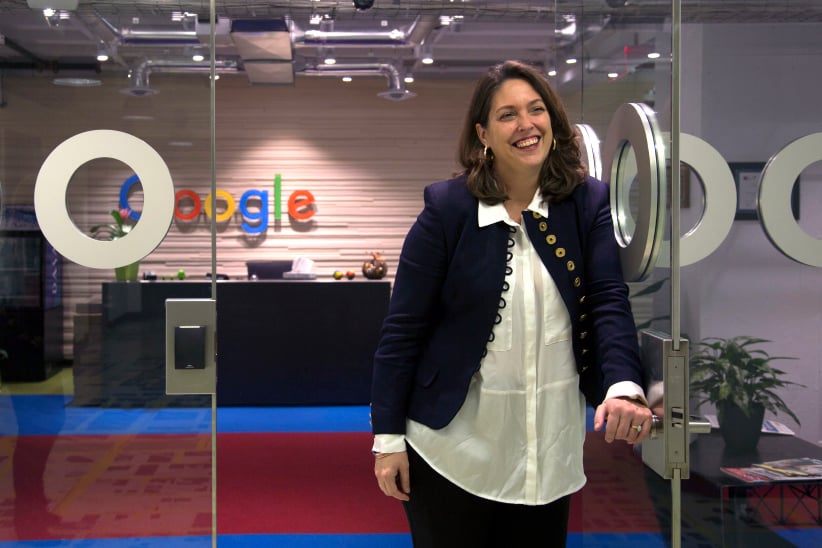 Marie-Josée Lamothe was always a math whiz. “I find it intellectually very challenging,” says the managing director of consumer products, government and entertainment at Google Canada and managing director of Google in Quebec. So she stuck to numbers at Université de Montréal, and planned to become an actuary. Which she did, right out of school. Four days later, she quit.

She worked her way up to management at Mosaic Sales Solutions within five years, and moved around, taking executive positions at Clairol and L’Oréal. “Whenever I felt very comfortable and things were going very well, and I was at the top of my game, that is when I would switch [positions].” That ability to change tack is crucial in the tech industry, which is always racing to the next big thing. At L’Oréal, she was tasked with taking the company digital, from online sales to creating a social media presence. “So after so many years at L’Oréal, I loved technology and I said, ‘Why couldn’t I work at Google?’ ” The job she landed, director of packaged consumer goods, didn’t exist before she joined the company in 2014.

The best place to pursue a job with Google is online, along with three million others who try to land an interview every year. What will make you stand out? Your story. A university education provides basic skills, but personality makes or breaks you. Lamothe wants to hear about a difficult job or moment and how you got through it. She wants to see what Google calls emergent leadership: knowing when to help and when to step out of the way. Oh, and if you do get picked, be prepared to be questioned by a team of future peers.

Learning moment: A headhunter was trying to recruit her for a job at L’Oreal after she’d had her third child, and she kept recommending other people. “(He) called a third time and said, ‘Why aren’t you ever giving me your name?’ And he made me realize … if they can [do it], why couldn’t I?” 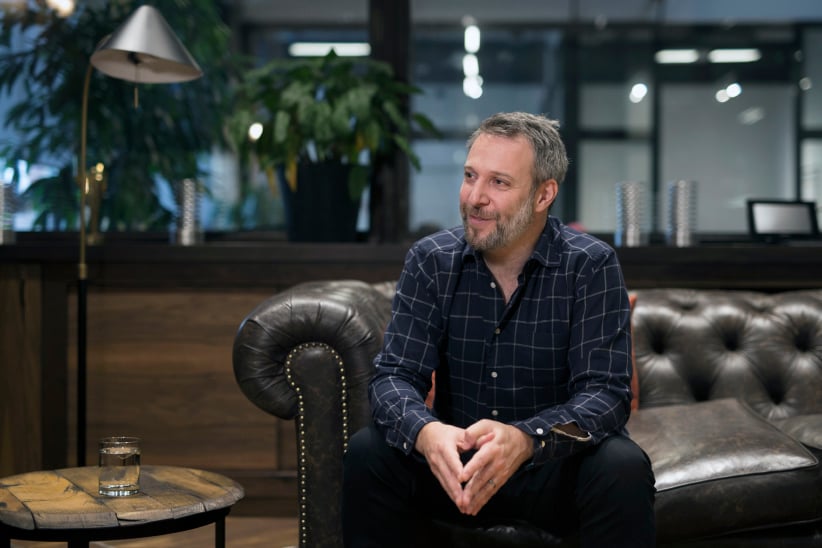 Michael Kronish has made films for a living ever since he graduated from university, yet the philosophy major never went to ﬁlm school. “A lot of my experience comes from just doing things myself,” Kronish says from a hip living-room space at Vice Media Canada’s new Toronto bureau.

Kronish, who grew up in Montreal, had his own mini-business as a DJ in high school, and kept at it while he finished his degree at Concordia. After graduation in 1991, he took off overseas, and when he returned to Montreal, he started making radio documentaries for CJLO, Concordia’s radio station. He ran into filmmakers at the Visual Arts Building, and that’s how he fell into the business. That do-it-yourself attitude informs his hiring to this day. When those resumés ping into his inbox— yes, he does open them—he wants to see some evidence of the DIY trait, plus a passion for storytelling. Have you volunteered at a film festival or school newspaper or written a blog? “What I’m always trying to do is get a true picture about what people really want to do.” The point is: make things. “Whether it would be a podcast or a video series, [taking] a shot at making some piece of content will go much further than you think it will.”

Kronish, the executive vice-president of TV and digital production in Canada, does value post-secondary degrees. A penchant for learning is a way of trying to make sense of the world, while getting that piece of paper shows focus. Once you do get in the door at Vice, Kronish wants to see “content that speaks to people straight in the eye. We are vigorously defensive about making sure that we don’t make content that looks up at people and certainly not content that looks down at people.”

The worst best job he ever had: Scooping ice cream at the local ice cream parlour when he was 15. “It was great because I got to hang out with my friends and eat free ice cream, and it was terrible because I got fired about a week after I started for not doing a good job. I think I learned that it would be much more fun to have a little bit more control over my destiny.” 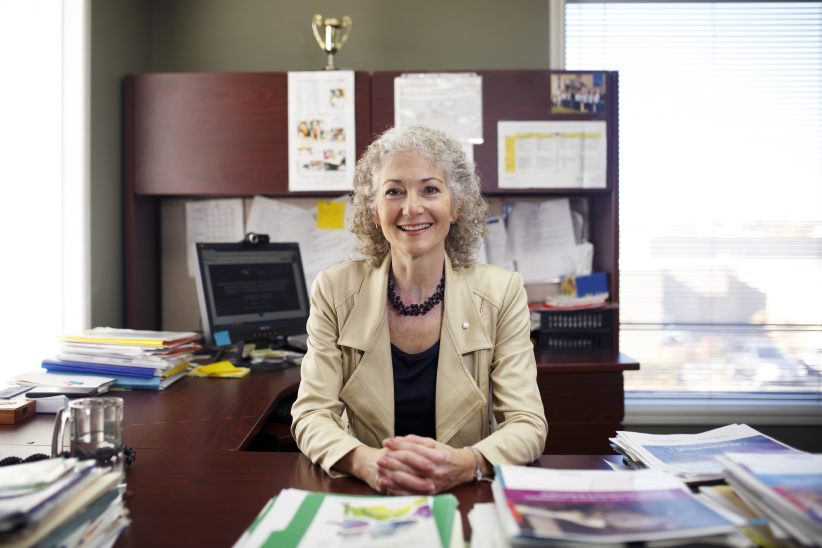 Bonnie Schmidt says STEM subjects are “underpinning innovation” in an economy where innovation is one of the attributes employers value most. But science classes are still too focused on getting students to memorize facts. “It’s not about just getting an A in biology anymore,” says Schmidt, founder and CEO of Let’s Talk Science, a Canadian non-profit that promotes STEM (science, technology, engineering and mathematics) learning. “It’s about how to understand how we can change the world using the health sciences or biology sciences.”

Schmidt was a Ph.D. candidate in physiology at Western University in London, Ont., when she started Let’s Talk Science as an outreach program. It paired graduate students with teachers in local schools to stir up interest in science. She says there’s a disconnect between growing interest in STEM fields—enrolment in forensics saw a jump due to the TV show CSI, for example—and the skills students are bringing to university. For example, few graduate with senior-level physics and math. “It’s about the skills of critical thinking, information management, asking great questions and seeking answers.”

Schmidt believes climate change will drive demand in careers in green energy and an aging population will push innovation in health care. New combinations of STEM subjects like mechatronics—mechanical engineering and robotics—are “changing the face of the trades world.” Getting your foot in the door will require “rising above the noise,” and Schmidt suggests being creative with applications and showing you have initiative. “I want to see that you’ve really thought about what I’m looking for as the employer.”

The only time she got fired: In university, Schmidt sold carpet cleaning services by phone. “I could not con people into actually buying the service,” she says with a laugh. “I think I lasted there about a week.” 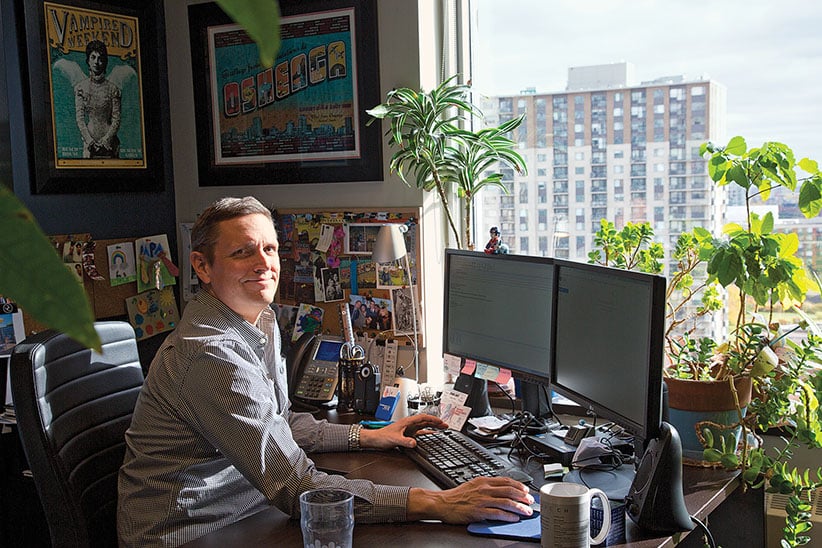 Sometimes when Nick Farkas, co-founder of Montreal’s famed Osheaga Music and Arts Festival, checks out a new venue, a blueprint will take him back to the days when he studied urban planning at Concordia University 26 years ago. That’s when he started promoting punk bands by night and working as a bike messenger by day.

Though he’s put on shows featuring big acts like Drake, Coldplay and the Rolling Stones, Farkas is an unassuming guy with a sympathetic smile and a non-swish office space. Now Evenko’s vice-president of concerts and events, he still rides a bike to work most days, and says his line of work requires skills learned outside the classroom, like perseverance and passion. “If somebody’s worked at McDonald’s for two years, then that, to me, is a good thing because that means they did a job that’s difficult and that isn’t overly rewarding.”

If you blog about music, play an instrument, or promote shows you want to see because no one else will do it, it shows you’re a self-starter and have passion for the music business. If you have a university degree on top of that, he says it shows persistence.

Farkas paid his way through school delivering messages, booking bands and planting trees in northern Ontario. That work ethos pervades Evenko, which puts on about 1,300 shows a year with a relatively small team of about 200 employees.

As an Evenko employee, you may meet cool bands, but the work is not as glamorous as it seems. Consider yourself warned: Farkas steers clear of people who are in it just to rub elbows with the stars.

The worst job he ever had: Repackaging returned shoes in an outlet store. “That was depressing as hell.” Before that, when he was about 15, he work at La Ronde flipping burgers until 1 a.m. “If you have some horrible job on your CV, that helps because it shows that you are willing to go above and beyond in the pursuit of a career.”