It's not easy for a fledgling school like Thompson Rivers University to compete on the international stage. That's why they have a special strategy: TLC. 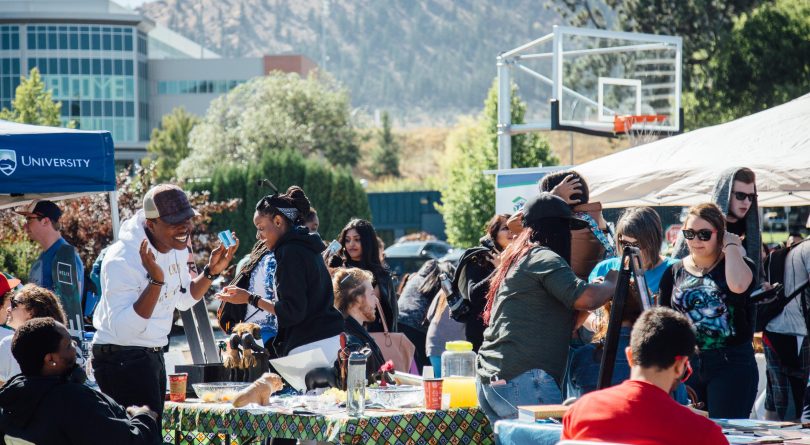 Students from around the world meet at TRU in Kamloops, B.C., a result of TRU’s international recruitment efforts (Photograph by Kathleen Fisher)

It’s orientation day at Thompson Rivers University in Kamloops, B.C., and the campus buzzes as hundreds of students queue for guided tours of the grounds, supplies at the bookstore and student identification photos. Listen closely and you can hear Japanese, Portuguese, Farsi and dozens of other languages being spoken among small groups of international students. Some have been in Canada less than a week and have already connected with their compatriots on campus.

About 3,500 full-time international students are enrolled this semester at TRU, a small university with a view of the Thompson River and sage-coloured mountains. They herald from about 100 countries. Luis Albuquerque, 19, has been at TRU for less than a month and already uses the pronoun “we” for “the Brazilian group.” A sunny extrovert with an easy smile, Albuquerque has studied English since he was nine and his language skills are strong, attributes that make him the informal leader of the group. Even so, he had trepidations about leaving home to study abroad. What would his life be like? Had he signed on for the right program? “I’m from a different country, and I worried people might look at me in a way that is not friendly.”

A continent away in her home in Nairobi, Kenya, Theresia Wangari, 25, harboured similar fears. A friend had told her about TRU, helped her apply and assured her the school was friendly. But as she boarded her first-ever flight, she was nervous. “This is a new culture, and I was scared I wouldn’t be able to fit in,” she says. She took comfort in a telephone conversation she had before she left with one of TRU’s student advisers, Reuben Onyango, who speaks Kiswahili, Kenya’s official language. He promised he would be at the school to greet her when she arrived and indeed, he was. “At least I knew someone,” Wangari says.

TRU has built the reputation of its international student program on this kind of personalized service, says Baihua Chadwick, TRU’s associate vice-president, international. The school hires 10 student advisers and one supervisor to mirror as closely as possible the cultural and linguistic makeup of TRU’s international student population. Their doors are open to help students deal with the inevitable homesickness, romantic woes, coursework queries and occasional cultural clashes. “When students are in distress, to see someone from their cultural background who understands their language, it makes a huge difference,” Chadwick says. Spending big on student services differentiates TRU from other institutions, which tend to invest in front-end recruitment instead.

It is not easy for a fledgling school like TRU, which became a university in 2005, to compete on the international stage. There are nearly a dozen colleges and universities closer to Vancouver, a city with an international airport and a far higher profile. Chadwick’s predecessors believed the best way to set TRU apart was to offer exemplary personal service from the moment a student expresses a flicker of interest in attending until graduation day. Recruitment efforts are important, but reputations grow by word of mouth, she says. “I’ve had families send six, seven, eight family members here.” The effort seems to have paid off; international students comprise about a third of the university’s student population.

TRU began its life as Cariboo College in 1970, offering a two-year university transfer program to local students. International students were not admitted until the mid-1980s. It was Charles Mossop, an anthropology and sociology instructor at the college, who persuaded the brass to allow him to recruit students around the world. Mossop himself had been an international student when he studied at the University of British Columbia. Although a Canadian citizen, Mossop attended secondary school in Great Britain and was slotted in with overseas students at UBC. “It certainly had an effect on my perception of what post-secondary education could be like,” he says. Talking to his fellow students about their lives and educational systems broadened Mossop’s perspective. He was struck by the “enormous potential of education to create the kind of inclusivity the world needs.”

RELATED: If students could start over, would they go to the same university?

Later, as an academic at Cariboo College, Mossop occasionally fielded requests from foreign students to attend the school and was convinced there was an untapped market of students interested in the university transfer program. “For undergraduates, the big universities were not always open because of lack of space,” he says. “And the fees were extremely high.” His first group of international students arrived in 1986 from Hong Kong and Mexico.

Mossop came to lead the school’s international student program. He knew it wasn’t enough to place an ad in a foreign newspaper telling students to come to a hotel to apply—spreading the word would require sending representatives overseas and hiring agents in key countries. “You have to have somebody on the ground, somebody knowledgeable,” he says. The school’s first overseas agent was hired in Hong Kong. To gauge other markets, Mossop attended international education fairs where he talked to students and scouted for prospective agents. Forging relationships took time: “a couple visits or more,” he says. The trips didn’t sit well with everyone at the school. “It once made the local papers in Kamloops—this college person travelling extensively at taxpayers’ expense.” It wasn’t true, Mossop says. All travel was funded by revenue generated through the program. 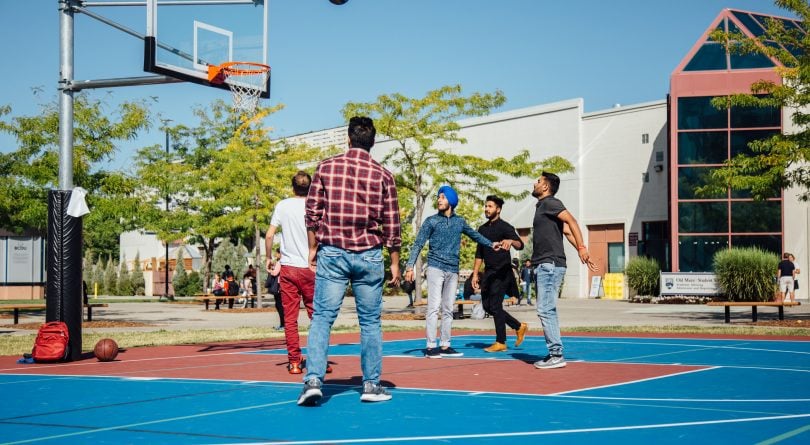 Given TRU’s dependency on its international program, the school deliberately seeks to draw students from a wide field. “This can be viewed as a risk-mitigation strategy,” Bovis-Cnossen says. TRU does not rely on a stream of students from a handful of countries and is well-positioned to weather a loss if Canada’s relations with a country go sideways. That happened last year when Saudi Arabia recalled most of its students in response to a critical tweet from Canada’s foreign minister, Chrystia Freeland. At the time, TRU had 11 Saudi students, Bovis-Cnossen says, so staff were able to focus on helping the students rather than worry about the hit from lost revenue. “Some institutions, I hear, lost several hundred.”

Staffen Liu-Calver, supervisor of international student support services, recalls how stressed the Saudi students were when news of the recall broke on Aug. 7, 2018. Some were master’s students who had finished and were waiting for their grades; others were waiting for a date to defend their theses. Undergraduate and diploma students only partway through their programs were scrambling to transfer to other schools. Bulletins went out to staff to expedite everything for the Saudi students so all those graduating could leave with a degree, says Liu-Calver. “Every office was going way out of their way.” One Saudi couple came to the office panicking because they had just bought a car and new furniture and had signed a lease to rent an apartment. “They had to sell the car and big-screen TV, still in the box,” says Liu-Calver. A week before the Aug. 31 deadline, the student services department hosted a goodbye party. They served Saudi dates, Saudi champagne—a type of fruit punch—and other treats, Liu-Calver says. Staff, faculty and even deans attended. “The students were in tears. They were so appreciative that we didn’t just dump them.”

Dealing with student angst is just one challenge when people of so many different backgrounds and beliefs are introduced to a small city where the population is still predominantly white. (The injection of international students is gradually changing the complexion of the city, Chadwick says. “Now if you go to the bank, Walmart, Superstore, anywhere, you’ll see international students working there.”) Integration is helped by TRU’s homestay program, which houses about a third of the students. Orientation is given to the students and host families to encourage a true cross-cultural exchange, Chadwick says. Students struggling with English are required to study English full-time until they reach a proficiency—International English Language Testing System 6.5—at which they can participate in class. Remedial English students are allowed to add one academic class once they reach a certain level, and more when they advance further. It is up to professors to ensure that international students don’t slow things down for the rest of the students, Chadwick says.

Considering the institutional perspective, Chadwick says the biggest challenge is integration. “We want to provide a globally minded campus—both ways.” So international students aren’t the only ones who have to adjust on campus. Their teachers and classmates must also learn how to teach and work with a broad mix of students who come with different educational and cultural backgrounds. Much of that instruction falls to Kyra Garson, who has a Ph.D. in education and, since 2013, has held a unique faculty position as TRU’s intercultural coordinator. “It was the first faculty position with such a focus in the country,” she says.

Garson teaches faculty and students about cultural differences in education and learning styles so they can better understand each other. For instance, North American students are expected to be active learners, Garson says. Most don’t hesitate to answer questions during class, challenge their instructors and weigh in during group discussions. But for some cultures, these behaviours are viewed as inappropriate or impolite, so they hang back during group work. This deference can be misinterpreted by the Western students as disinterest or laziness, and this misinterpretation, left unchecked, can lead to one or two less inhibited group members doing most of the work. Garson hosts seminars to explore these intercultural differences, sometimes incorporating role play where local and international students practise switching communication styles. Instructors are encouraged to be aware of different styles and preferences and to structure group assignments to gauge success by the group’s ability to involve all its members. “What we know is, if we just throw people together and through osmosis expect them to work out their differences, we might entrench stereotypes,” says Garson.

Intercultural understanding benefits Canadian students who will be entering an increasingly global and international workforce. And it is a big draw for international students like Wangari, who chose TRU’s master of nursing program because she wanted to explore a different country and culture. After just over a week in Kamloops, most of her greatest fears have dissipated. She cracks a huge smile: “I’m going to love it.”

This article appears in print in the 2020 University Rankings issue of Maclean’s magazine with the headline, “A little TLC goes a long way.” Order a copy of the issue here. Subscribe to the monthly print magazine here.