Professors who teach politics report that since 2016, they've been confronted with increasing polarization among students—as well as their own biases 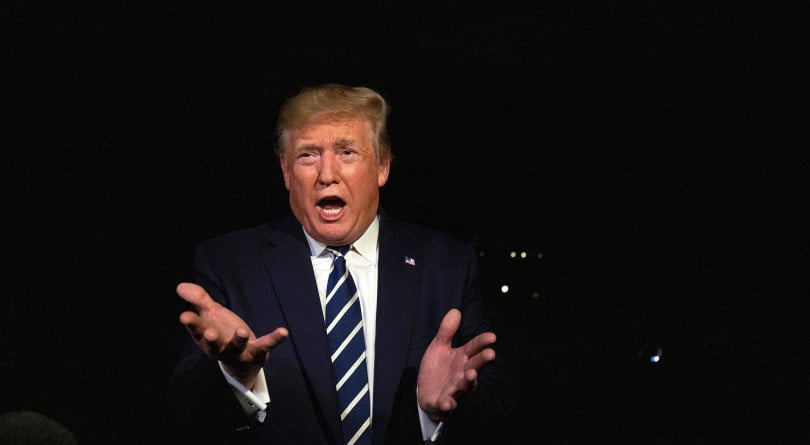 One political science professor said his students can’t talk about anything but Trump; other profs have instituted ‘No Trump’ rules (Alastair Pike/AFP/Getty Images)

Donald Trump’s presidency has changed the game for many teachers of university-level political science.

As Andrea Chandler, a poli sci professor at Carleton University, points out, it has become easier to ignite conversations in the classroom. “Nobody is apathetic anymore. Nobody thinks that democracy doesn’t matter anymore,” she says.

There are plenty of current events to illustrate course concepts. Julie Moreau, a professor of sexual and gender politics at the University of Toronto, talks to her students about “politicized homophobia,” which refers to how politicians mobilize homophobic or transphobic discourses to achieve their political ends. “Trump has made statements, whether it is on Twitter or at his rallies, that demonize or vilify LGBT people,” says Moreau.

Another concept is “homonationalism,” the way states and leaders incorporate the language of “protecting” LGBT people in their nationalistic agendas. An example, says Moreau, is Trump’s 2016 convention speech, where he said he wanted to “protect” LGBT Americans from “Islamic terrorism.” “Trump gives me the perfect example,” says Moreau. “It’s just so easy to pull up one of his speeches and students get it immediately.”

Stephanie Martens, a professor at Laurentian University, uses Trump as an opportunity to cover populism in her course on the history of political thought. While Martens focuses on incarnations of populism in Europe, she also raises questions about Trump’s populist sensibility.

RELATED: Canadians are primed for some Trump-style populism

But there are distinct challenges that come with teaching in the current political climate. This past summer, I surveyed and interviewed political science professors teaching at institutions across Canada about how they have been adjusting their courses in the age of Trump. This project was part of a forthcoming study funded by a research award provided by McMaster University.

Some professors told me that their students don’t trust each other anymore. Many are now more alert to open white supremacy or fascist discourse in their classrooms. One professor said he now has to grade alt-right essays, something he has never done before. Some professors underscored the sharp partisan divides and the rising temperature of discourse from students, particularly those who publicly support Trump.

Renan Levine, a professor at the University of Toronto, used to have his students simulate the United States Senate Committee on Foreign Relations and the president’s daily media routine. But he has recently scrapped these exercises. “Trump is [making foreign policy decisions] because of narcissism. He’s doing this out of impulse. These are not areas that I’m at all comfortable going into as a political scientist,” says Levine. Explaining why he dispensed with the media routine simulation, Levine says, “I was afraid initially that my class would be giving me a poor imitation of Melissa McCarthy on Saturday Night Live imitating Sean Spicer.”

Some professors have noticed that their students refer to flimsy Internet sources for assignments. Martens, whose course in the history of political thought focuses on the original writings of ancient and medieval philosophers, says “students seem to be coming up with very far-fetched and odd examples . . . This is new, and I would associate it with the Trump era.”

Many professors reported that students give Trump outsized attention. One said that his students can’t seem to talk about anything else. 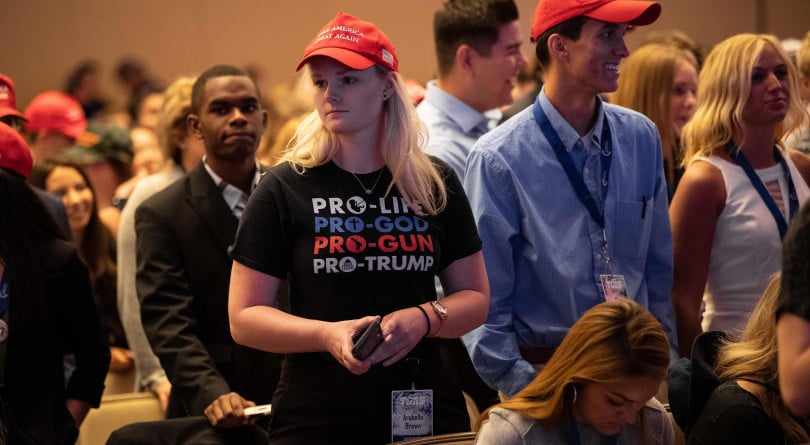 Partisan divides in the classroom are unlikely to vanish soon, regardless of Trump’s fate in 2020 (Nicholas Kamm/AFP/Getty Images)

Ultimately, political science professors seem to face two key challenges. The first is the changing political climate, which they are tasked with metabolizing and teaching. The second is the classroom environment, which seems more polarized and ideologically charged than in recent decades.

To tackle the first challenge, many professors teach their students that traditional democracy may be on its last legs. Some are introducing course readings from books such as Steven Levitsky and Daniel Ziblatt’s How Democracies Die, which argues that elected leaders can erode democratic systems by overriding restraints on their power. While teaching about the fragility of democracy, many professors are reaffirming the importance of long-standing norms, such as the responsibility of the U.S. president to respect civil liberties and political opponents.

To tackle the second challenge, professors have been implementing dynamic strategies to defuse overheated classroom discourse.

Some professors spend more time teaching students how to distinguish credible sources from unreliable ones and debunk logical fallacies. Others institute a “No Trump” rule or seek to downplay Trump’s power. One professor said he no longer asks students for their opinions on immigration policies to avoid having “extreme right-wing” responses.

Another strategy involves deconstructing Trump’s rhetoric and policies. In addition to exploring concepts like homonationalism, Moreau talks to students about intersectional oppression. “What the Trump administration brings to the fore is the intersection of racism, sexism, homophobia, transphobia and anti-immigrant sentiment,” she says. “I think it’s the responsibility of everyone in my profession to give students the tools to understand what’s happening right now.”

RELATED: How liberal democrats can save America, slowly but surely, from Trump

Some professors feel compelled to share their views with students. “Political scientists have the moral responsibility to sound the clarion call,” says Levine. In being up front with students about his concerns about Trump, Levine admits that he comes from a place of bias. “If I call the Trump administration racist, you should know that I’m coming from the perspective of a Democrat,” he says.

Whether or not Trump remains in office after the 2020 election, classroom divides may not be bridged any time soon. As many professors pointed out, partisan polarization has been deepening for decades, and Trump’s rise to power may be only a symptom of broader social and political tendencies.

“A few years ago, I tried a lot harder to be very cool and detached in the classroom and in conversations with students. But now I think it’s important to just acknowledge that politics these days is emotional and I do have views on it,” says Chandler.

This article appears in print in the 2020 University Rankings issue of Maclean’s magazine with the headline, “Trump in the classroom.” Order a copy of the issue here or subscribe to the monthly print magazine here.