How universities are dealing with requests for refunds during coronavirus

Some schools are offering a flat amount for residence and meal-plan fees, some have offered pro-rated reimbursements. Students want more transparency around the process. 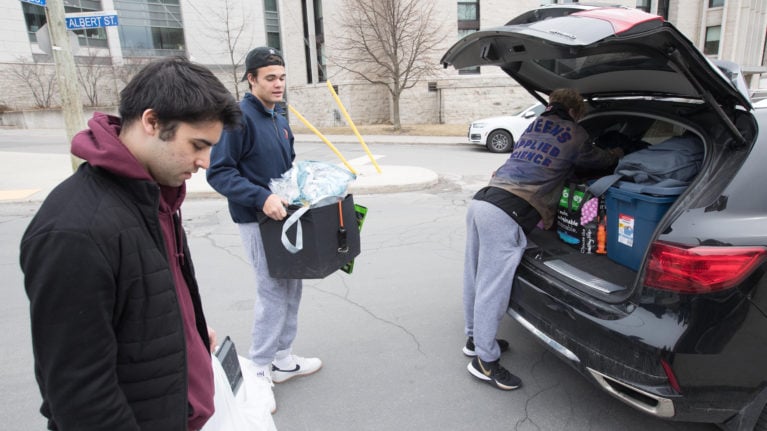 On March 20, students across Nova Scotia received a provincial health directive: go home. Matthew Harrison packed up his dorm room at Acadia University in Wolfville, N.S., and moved to a house in Paradise, N.S., about an hour from the campus.

Once there, Harrison says he was frustrated by Acadia’s initial decision not to provide refunds to students for fees they had already paid, for residence and meal plans, for example. “A lot of people I know were [also] talking about how disappointed they were,” he says. “So I decided that I would try to get something.” He started an online petition, and had nearly 1,000 signatures from fellow students within the first day.

Similar petitions are circulating on campuses across Canada, which all but emptied out at the same time as Acadia’s did. Many schools have kept dorms open, mainly for international students or those with few other options, and continued employing a skeleton crew of kitchen and maintenance staff. But many Canadian students who had been living on campus left their residences having paid for a month’s worth of services that they didn’t, in the end, receive.

Acadia eventually decided on a refund of up to $900, which students can put toward future tuition or take in cash. (Only students who lived in the dorms, had a meal plan, and had to leave early due to COVID-19 are eligible.) Ian Murray, executive director of the office of the president of Acadia, says the university knew it needed to offer something to students, and consulted with other schools to come up with a manageable sum. “We feel the $900 credit is an acknowledgement of the inconvenience and disruption students have endured because of the global pandemic.”

Freya Milliken did her own calculations, dividing the amount that she paid for her dorm room and meal plan by eight, the number of months she was supposed to have spent living on campus. She says she should be getting back about $1,300, and while she’s grateful for any refund, a $400-loss is a hit. “I don’t know if I’m going to have a job in the summer, and a lot of my friends are also in the same boat,” says Milliken. “$400 is like half a paycheque.”

RELATED: What life is like for students still living in university dorms during coronavirus

Since Maclean’s spoke with Milliken, the federal government has introduced a student support plan which includes an emergency benefit allowing post-secondary students to collect $1,250 (and in some cases $1,750) a month from May to August, as well as a service grant, which provides work opportunities during COVID-19 in exchange for up to $5,000 toward a student’s education in the fall.

Murray says Acadia was striving for simplicity with its flat-fee rebate; the school simply doesn’t have the capacity to work through calculations from every student’s account. “This would require an enormous effort by our already busy student accounts staff. We felt a fair and equitable solution, in keeping with similar institutions but reflecting the financial reality of our own university, would be preferable for all involved,” he says.

At St. Francis Xavier University, where administration has offered refunds ranging from $500 to $975 depending on accommodations and meal plans, students have petitioned the university for a larger refund and to provide a detailed breakdown of the budget. “We just don’t see how they calculated the amount of the refund,” says a student who prefers not to be named. “It’s just like, ‘Here’s a number, I hope you take it.’” This student is receiving $575 back from the school, but by his calculations, he says he should be entitled to about $1,200.

From the university’s perspective, costs don’t break down into a simple daily formula. Cindy MacKenzie, manager of media relations for St. FX, says the refunds were calculated to balance the financial capacity of the university with the disruption to students. “The reality of our residence operations is that most of our costs are fixed and as such don’t vary significantly as a result of the time students actually occupy the rooms,” says MacKenzie. She says the total cost of the refund is approximately $1.2 million, and will be incurred by the school as a deficit.

RELATED: Pass/fail grades should be the only option during the coronavirus

Students at the University of Toronto who live at CampusOne, an apartment building which is affiliated with but not run by the university, are also petitioning, in their case for a cancellation of their rent. Danny Roth, a spokesperson for CampusOne Student Residence, says the company has reduced April’s rent by $150, as well as taken $100 off the student meal plan.

“Management has also made it clear to residents that while we anticipate that lease obligations will be met, we appreciate the challenges of the current situation and are willing to discuss individual options for residents facing COVID-19-related difficulties,” says Roth. A statement from CampusOne also promises to review the circumstances further as the COVID-19 pandemic evolves.

A survey done by Undergraduates of Canadian Research-Intensive Universities at the beginning of April found that nearly 80 per cent of the 3,157 respondents said they were worried about paying tuition in the fall. With the new CESB introduced, UCRU representatives say they are checking in again with their members, and asking for clarity on which students are eligible for the benefit.

At this point, there is no national standard for refunds. The University of British Columbia offered students a prorated refund if they vacated campus by March 31. Queen’s University refunded a flat fee to students, but also credited $700 to student meal accounts.

The absence of a single standard has left students like Christian Goldie, who attends Acadia, asking for more transparency, wondering how the calculations were made. “We were kind of left in the dark here,” he says. “It’s hard with the social distancing, because it’s not like we can go out and protest.”