Foreign students are streaming into this country as universities offer guaranteed housing, language classes and mentoring to help newcomers succeed 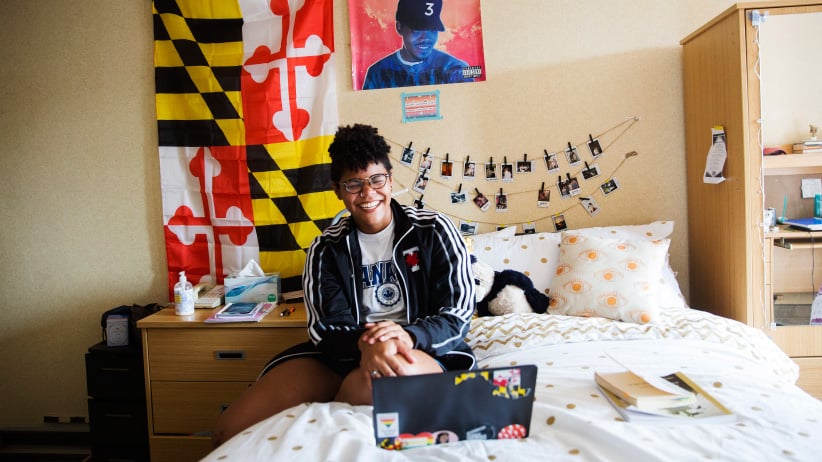 American teenager Rebekah Robinson who has studied in Russia and France, speaks both languages and is currently studying at the University of Toronto. (Photograph by Michelle Siu)

American teenager Rebekah Robinson studied in Russia and France, speaks both those countries’ languages, and now plans a career in international relations. In scouting options for university this fall, she short-listed six universities: four in the United States, the University of Toronto and McGill University.

She wanted a university with a strong international relations program in a big, diverse city with—believe it or not—a winter season. On her first visit to Canada in August 2016, her tour of Toronto and U of T sealed the deal. Driving into the city along the waterfront, she caught a glimpse of the skyline.

“It took my breath away in terms of how big the city was,” says Robinson. She was also impressed by the “super friendly” welcome on campus.

A native of Severn, Maryland, she attended a U of T event in nearby Washington, D.C. after her acceptance last December. The program featured top professors and students discussing the state of the world. “It was really cool,” says Robinson, 18, now in residence at U of T.

She is among the latest wave of international students—a record 414,285 in 2016 and double the volume in 2009—choosing Canada for post-secondary studies. The growth continued this year, with some institutions up sharply. “This is Canada’s global moment,” says Paul Davidson, president of Universities Canada, citing a “confluence of factors that gives up huge opportunities right now.” Schools are now engaging in a mix of aggressive promotion and specialized programming for international students as they compete in the intense, global competition for top students.

Seen as affordable, safe and immigrant-friendly, Canada beneﬁted this year from favourable tail winds powered by U.S. President Donald Trump’s anti-immigrant rhetoric and Britain’s decision to leave the European Union. The two countries remain prime destinations for international students but overseas applications to Britain dropped this year for the ﬁrst time in a decade. “Canada is in a really good place,” says Andrew Barkla, chief executive ofﬁcer of Australia-based IDP Education, a major international student placement service. Out of the 35,000 IDP placements in ﬁve English-speaking countries, 2,300 students landed in Canada over the 12-month period that ended in July 2017. That’s up 127 per cent from the previous period.

Schools across the country have beneﬁted from the trend. The University of Alberta saw a greater-than-average spike in applications this year and, by September, enrolled 1,449 new international undergraduates: up 19 per cent from a year earlier. Britta Baron, vice-provost and associate vice-president (international), says Canada currently enjoys a “global advantage,” citing the dollar, increased university marketing and a nativist American president as factors.

“People tend to underplay or overplay [the Trump factor],” she says. “Some say it is not relevant; that is rubbish. We would not be seeing the numbers we are seeing if it were not for the political circumstances. On the other hand, it is not the full story.”

A decade ago, her institution introduced a multi-pronged game-plan: a targeted focus on India, the Middle East and, increasingly, Africa; improved ties to “feeder” schools with top students; and growing use of virtual “open houses” for those unable to visit the campus. Over that period, the percentage of international students on campus has climbed from four per cent to 15 per cent of all enrolment.

Baron warns success can be fleeting. “These moments come and go so we have to make the best of what we are experiencing now and try to make it sustainable,” she says. Like many university leaders, she argues Canada needs a “truly effective and national strategy” to attract top foreign students.

IDP’s Barkla cautions that “Canada has a long way to go to really developing its international reputation in diverse markets.” Despite having “great quality institutions,” he says, “[Canada] doesn’t do as good a job, and ultimately needs to do a better job, of positioning the quality of its education on the international stage.”

Daniel Guhr, a long-time international education consultant, sees no room for complacency. Even if the current administration in Washington has spooked some students into looking elsewhere, Guhr says the American government still “has not interfered whatsoever with 95 per cent of international students getting study permits to the U.S.” Guhr, the managing director of California-based Illuminate Consulting Group, describes Canada as “a world champion for effectiveness: it spends next to no money and gets great results. How sustainable that is, I am dubious.”

Unlike its competitors in a US$200-billion global recruitment market, Canada has no national education department. Ottawa spends about $5 million a year in overseas marketing compared to $40 million by New Zealand, says Guhr, noting some Australian universities “spend multiples of the Canadian government in promoting themselves.”

That’s not to say individual schools aren’t moving aggressively. After rolling out a new strategy ﬁve years ago, U of T has intensiﬁed efforts over the past two years to deepen its pool of top students from the U.S., India and the Middle East.

The university now sponsors events in major American cities, recruiting U of T alumni who live in those locales to share their experiences with prospective students and their families.

“That was a really great way to reach students and parents in a way that we hadn’t done as much of in the past,” says Ted Sargent, vice-president international for U of T.

The university has added recruiters in India, Turkey and the United Arab Emirates, and introduced an all-expenses-paid scholarship for 37 international students with high academic and ﬁnancial need.

This year, U of T acceptances of American students jumped 66 per cent from a year ago, with a 47 per cent spike from India, a doubling of students from Turkey and a 40 per cent rise in those from the UAE. Holding steady on total enrolment and a foreign-to-domestic student ratio of 20 per cent, U of T has been increasingly selective about its applicants and diversiﬁed its international students, which have been heavily drawn from China in the past.

Siddhant Talwar, a ﬁrst-year commerce student from New Delhi, India, turned down a US$44,000 scholarship from Indiana University in Bloomington to attend U of T’s Rotman School of Management, with no offer of ﬁnancial aid.

The politics south of the border were not a factor, says Talwar. “I was never worried about that.” Keen on a ﬁnance career, the 18-year-old chose Rotman as “an internationally recognized business school” located in a major ﬁnancial centre with global networking opportunities. “That was the tipping point for everything,” he says.

U of T is not alone in wooing top students.

McGill University, with 30 per cent of its students from abroad, increased out-of-country registrations by 10 per cent in a year when Montreal won top honours in an international ranking of the best cities for students.

At the University of British Columbia, ofﬁcials report continued steady growth in international applications (up 14 per cent this year)—but no so-called “Trump bump.”

“We are not seeing anything unusual, notwithstanding events abroad,” says Andrew Szeri, provost and vice-president academic of UBC, which recruits from 78 countries and 23 American states. Its recruitment arsenal includes guaranteed on-campus housing for all ﬁrst-year students; all-expenses-paid scholarships for ﬁnancially needy, high-performing international students; and an academic “acclimatization” program before school starts for those educated outside North America. This “Jump Start” program began “as a retention tool, but now is something that helps us with recruitment,” says Damara Klaassen, senior director of international student services. 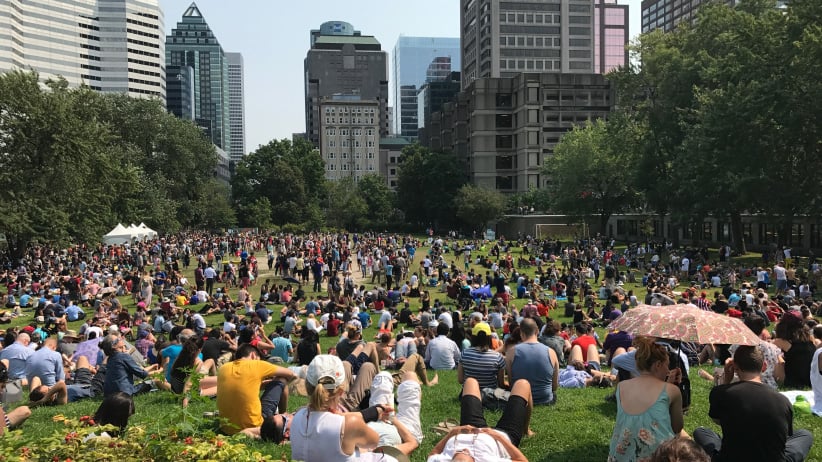 As universities raise their recruitment game, many are adding programs to assist those who speak English as a second language and struggle to integrate on campus. A 2014 survey by the Canadian Bureau for International Education found 56 per cent of international student respondents reported having no Canadian students as friends.

“It is cheaper to retain a student than to recruit a new one,” says Livia Castellano, associate vice-president (international) at Regina.

Aiming to foster campus engagement, the university sought ﬁrst-generation Canadian students to assist new arrivals from the same ethnic background. “They are Canadian and from Saskatchewan, but they are not your blond, blue-eyed kids coming from a farm,” says Castellano of the peer-to-peer mentors. “It works perfectly.”

Though still drawing from China, the university has diversiﬁed by recruiting in India, Nigeria and South America.

The multicultural flavour on campus appeals to Kelsi Murrow, a 24-year-old from northern California who graduated from Regina with a B.A. in ﬁlm studies last spring, and is back this fall for her master’s. In 2013, after one year of study in Los Angeles, she switched to Regina for a semester-long exchange but decided to stay.

“I lived in Los Angeles, considered one of the most diverse areas, but I still have seen way more diversity and inclusivity of every type of person here in Saskatchewan,” says Murrow. “Whatever your background is, you will ﬁnd a place here.”

In Nova Scotia, with a declining population, encouraging international students to stay after graduation is a new priority. Final enrolment numbers are still pending, but most institutions reported strong growth in applications and acceptances.

This fall, in a new pilot project, 50 students arrived from China, India and the Philippines to study at provincial post-secondary institutions, and will be coached over the next four years to start their careers in Nova Scotia after graduation.

In another pilot project, similarly funded by federal and provincial governments along with EduNova, a provincial education industry association, 50 international students who wrapped up their studies last year were mentored by business and community leaders to land local jobs in their chosen ﬁeld.

The province hopes to retain 10 per cent of arriving international students as future immigrants, a stark contrast to anti-immigrant sentiments elsewhere.

“We hope our message is resonating more than it was in view of other countries’ policy shift in the opposite direction,” says EduNova president Wendy Luther.

Kenya Dames, born in The Bahamas, came to Nova Scotia in 2011 for her university education and decided to stay.

“I knew I had better opportunities for me here,” says Dames. “It was silly for me to go home.”

Last year, in her ﬁnal year at Halifax’s Mount Saint Vincent University for a bachelor of public relations, she signed up for the “Stay in Nova Scotia” pilot that offered professional mentoring and immigration workshops. After graduating in the spring of 2017, she landed a one-year contract with the Canada Revenue Agency as an information ofﬁcer.

Over the next decade, Canadian universities expect further upward growth in international students, says Universities Canada’s Davidson. “How much of it Canada wants to have is really a matter of public policy choices.”