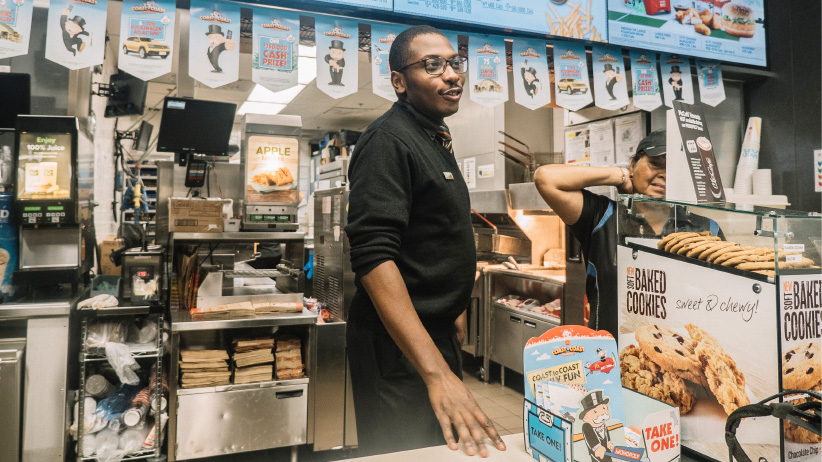 Peters, whose in-house management at McDonald’s counted toward his business diploma, can see himself owning an outlet in the future. (Photograph by Jalani Morgan)

Business student Solomon Peters shaved $1,500 from his tuition and reduced his class time by 168 hours at Sheridan College in Oakville, Ont., thanks to an agreement last year between his employer and Ontario’s 24 public colleges.

The 30-year-old, who will graduate this semester after pursuing a two-year diploma part-time, also manages two McDonald’s outlets in Toronto. His college will count the fast food chain’s in-house training for managers as the equivalent of first-year business studies.

Peters, now a general manager at McDonald’s, began working for the company at the age of 15. Since then, for every promotion, he has enrolled in McDonald’s training programs that offer lessons on human resources, organizational behaviour, finance and leadership. That on-the-job training covered the first-year business curriculum, as vetted by Colleges Ontario, a provincial association. “It allows you to reach somewhere you didn’t have the opportunity to go before,” says Peters.

The agreement is one example of growing collaborations between colleges and industry to expand learning opportunities in a quickly changing economy. “We are all talking about the need for talent and the shortage of talent,” says Cheryl Jensen, president of Algonquin College, a participant in the agreement with McDonald’s. “The only way to make that sustainable in the future is to develop strong partnerships between post-secondary institutions and employers.”

“The [in-house training] and the education piece partners so well together,” says Stephanie Hardman, chief people officer at McDonald’s, who aspires to replicate the prior-learning project in other provinces. “To be able to apply what you have spent years learning [at work] and get credit for it and further your learning is invaluable.”

She cautions that formal agreements with post-secondary institutions take time, but are worth the effort. Before signing on, Colleges Ontario spent months reviewing McDonald’s national training modules for managers to ensure the content covered the same material as a first-year business program.

“It was not difficult to map the credential to the exact outcomes of a basic business program in college,” says Mary Pierce, chair of Fanshawe College’s Lawrence Kinlin School of Business, who represented Colleges Ontario in the negotiations with McDonald’s.

Algonquin College is another example of a school establishing new ties with industry to enrich the curriculum and equip students with job-ready skills for employers.

In March 2017, Algonquin announced a wide-ranging agreement with Siemens Canada to enhance student skills and internship opportunities in advanced manufacturing.

Under the arrangement, which takes effect in September 2018, engineering and technology students work in an on-campus lab built to Siemens’s specifications. Algonquin instructors, who travelled to Siemens’s German headquarters for training, deliver the same certification program the company offers globally to other post-secondary institutions. The course content on mechatronics—which combines electronics and mechanical engineering to design computer-controlled systems used in large-scale industrial manufacturing—is embedded in the college’s existing technology diploma. Select students also qualify for a paid co-op placement with Siemens. The deal gives the company a first-hand look at top talent, and students a shot at full-time employment after graduation.

“If we feed the academic system with our knowledge, we are going to get better quality from the academic system,” says Tom Murad, head of Siemens Canada Engineering and Technology Academy. Over the past two years, Siemens has negotiated half a dozen similar agreements with post-secondary institutions, mainly colleges, including Algonquin. Murad is currently negotiating with other post-secondary institutions as potential partners with his academy.

“We think colleges are a good starting point to implement our Siemens methodology,” he says, citing the strong college focus on applied learning. “We want to create a generation of people who are academically qualified but, most importantly, have the skills to do the job.”

Murad estimates between 80 and 90 students in Canada have taken the mechatronics certification so far, which serves as an additional credential for diploma graduates.

For students, the opportunity to work on advanced industrial technology in a college lab offers an authentic learning experience.

“The mechatronics program is kind of hearing it from the horse’s mouth,” says Ian Kaminsky, 22, of his decision to pursue the certification while studying mechanical engineering at Mohawk College, which also has an agreement with the Siemens academy. “It is the industry saying this is what we do and we will teach you how to do it.”

Kaminsky, who says he is “into building things,” recently completed a three-hour online Siemens exam, delivered globally by the company’s academy, to test a student’s ability to break down, rebuild and troubleshoot components. Along with his mechatronics certification, he is wrapping up a year-long placement with the firm and hopes to become a full-time employee when he graduates from Mohawk in December.

In partnering with Siemens, colleges must make their own significant investment to build a state-of-the-art lab to company specifications, which enables students to work using the same software and hardware as industry.

Algonquin, for example, invested $100,000 to send six college officials to Germany for training to deliver the basic and intermediary levels of the mechatronics certification program. With that knowledge, college staff looked to incorporate the Siemens program into existing college programs in mechanical engineering technology. The college also plans to spend $300,000 on capital equipment that, in addition to supporting the mechatronics certification program, will contribute to the development of future college programs in automation and robotics.

“We were interested in a mechatronics program anyway,” says Algonquin’s Jensen. “We partnered with Siemens because we know them and we could accelerate the start [of the certification program]. There is no better way to sell a program to students than to have an employer saying we need you when you graduate.”

For their part, employers are keen to build relationships with colleges to recruit and retain top employees.

“That is an incredible talent pool,” says McDonald’s Hardman, who notes the high number of corporate employees who began their careers in the company’s fast-food kitchens. “These are potential owner-operators and potential future executives and even better managers who bring other great talent along.”

As for Peters, earning a diploma while at McDonald’s only fed his appetite for further studies after college. Though he plans to remain with the company, he is considering a possible university degree in business.

With so much on-the-job training and classroom study, does he see himself as a future owner of a McDonald’s outlet?