Turning the humble bean into the next kale

Chef Brad Gray is putting beans in all kinds of unexpected, but surprisingly delicious, places — from pastas to cookies to crèmes brûlées 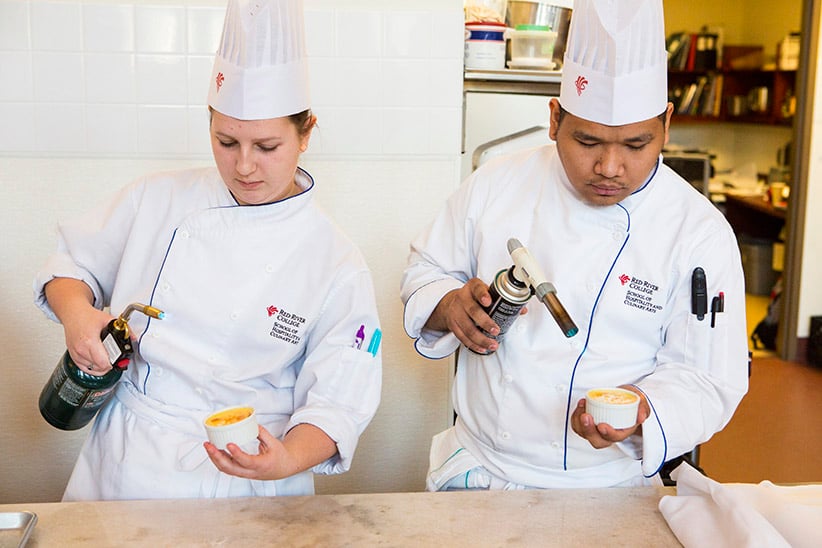 The bacon trend is (finally) sizzling out as chefs and diners look for other ways to stimulate their taste buds rather than relying on the crutches of salt and fat. Combine that with a steadily growing legion of young diners shifting to a less meat-centric diet, be it for reasons of economics, the environment, or health, and you’ve got the catalysts for much of the bean-y research taking place in test kitchens across Canada.

For the past year, chef Brad Gray, an instructor at the Red River College School of Culinary Arts in Winnipeg, has been (literally) cooking up ways to incorporate beans into pastas, cookies, and even crèmes brûlées. “The Millennial generation is all about getting as much protein in their diet as they can, and pulses are an easy way of achieving that,” says Gray. “People are also realizing that animal protein isn’t going to be sustainable for the global population, so we need to find alternative methods of feeding the planet.”

So when the culinary arts campus opened two years ago, the school partnered with the Manitoba Pulse and Soybean Growers to come up with recipes using flours made from navy, pinto, and black beans grown by local farmers, hoping that the humble legume would achieve the same level of renown as kale in recent years. The timing is right, as the United Nations declared 2016 to be the International Year of Pulses, encouraging people to grow and eat more beans to lower rates of obesity, manage diseases like diabetes, and help with soil fertility (legumes are often grown to enrich the soil with nitrogen).

But without much experience cooking with bean flours, or much professional baking experience at all, for that matter, Gray looked to fellow pastry chefs at the college for guidance, and to co-researcher Mavis Mcrae for work on the dishes’ nutritional content.

“It’s not the most desirable flavour, especially in baked goods,” admits Gray, adding that navy bean flour mimicked wheat flour the most in terms of taste while the pinto beans are best used in a heavier pie crust to mask its strong legume flavour. Bean flour also doesn’t hold its shape when made into pastas, dumplings, and crusts, so while a linguini can’t be all lentil, somewhere between 25 and 40 per cent of all-purpose flour can be replaced by bean flour (still not a bad way to amp up a dish’s fibre and protein content).

His findings, along with 10 recipes, were published on the Manitoba Pulse and Soybean Growers’ site last December with tasting notes and cooking tips for dishes like a chicken and bean pot pie with a pinto bean crust, shortbreads made with navy bean flour, and the ultimate vegan-sounding dessert: pinto bean and chia seed power balls, which is a sweet dessert made from blending pinto bean puree, oats, chia seeds, fruit, and spices. “On a personal level, since I started this project, I lost significant weight from eating more pulse. My doctor also told me I’m in perfect health when I went for a check-up recently,” he says. His co-workers also dug his navy bean and carrot cheesecake, and he made a chocolate cake using navy bean flour that he said tasted better than the traditional version.

The next step is to incorporate more of this kind of recipe testing into the school’s curriculum, giving students a chance to see there’s a whole world of food that doesn’t involve owning a restaurant. “Right now we’re partnering with the University of Manitoba because we don’t have a lot of the specialized equipment for nutritional analysis,” says Gray. “The research is still in its infancy, but it’s growing steadily with each month. Eventually, not only do we want to partner with Manitoba companies to do food research, but national and global companies as well.”

While Canada is already well-known as being the world’s biggest exporter and producer of peas and lentils, Gray is hoping that the upcoming Year of Pulses will shine a bigger light on his province.

“In Manitoba, we’ll probably never have grapes for a vineyard but we have very good agricultural land for developing pulse here and in Saskatchewan,” says Gray. “Manitoba is going to be a hotbed for this kind of research in the next few years.”