"FYP," as King's unique first-year program is known, is a chance to study primary texts in philosophy, literature, art and science in small groups 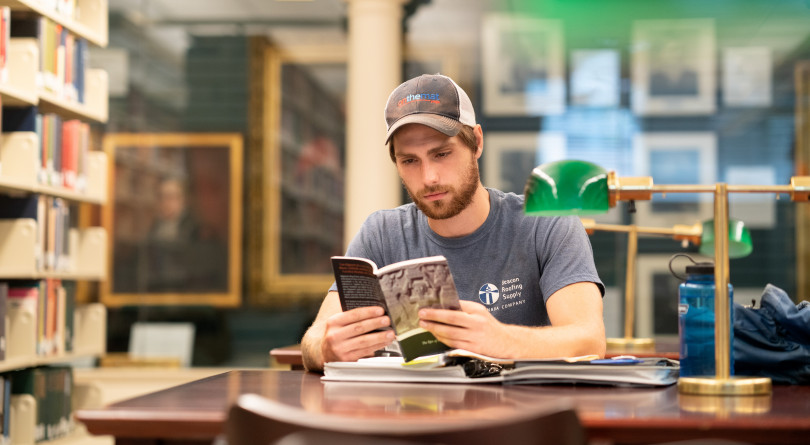 Reading 'Gilgamesh' in Halifax: a student studies amongst the 80,000 books in King’s Library (Photograph by Ian Selig)

The sound of 200-plus students chatting with each other fills the tiered lecture hall at the University of King’s College in Halifax as the first day of Foundation Year Program (FYP) begins. Most of these students moved into residence only a few days ago, but friendships are already forming. Laptops, refillable water bottles and copies of The Epic of Gilgamesh cover the tabletops. The book-length poem, written in Mesopotamia circa 1800 BCE, is considered one of the earliest great works of literature.

Started in 1972, the FYP (sounds like “flip”) is regarded as one of Canada’s top Great Books courses, and has a national reputation for excellence as an alternative first-year of undergraduate studies. Throughout their first year, students at King’s make a temporal journey through the rise of civilization via its great works of philosophy, literature, art and science.

“All of the texts we look at have what I call infinite interpretive possibilities,” says Neil Robertson, FYP’s director and an associate professor of humanities at King’s. “You never grow tired and there are always new interpretations. The students bring these texts to life in new ways. Each year brings its own questions, issues and concerns.”

Key to FYP’s ethos, says Robertson, is its reliance on primary texts rather than textbook analysis. “We’re reading The Epic of Gilgamesh as it was recorded on clay tablets,” he says. “Not only are they having an encounter with another world, but we are all on the same page. I tell the students the only difference between them and me is I’ve got thinner hair. There’s not this sense that the tutor is the authority, and the students are there in a passive fashion. We’re all engaged in this exploration together.”

Ata Zargarpour, a third-year student from Vancouver, says his time in FYP changed his outlook on university. “So many of these texts are people through history asking the same kinds of questions that we ask today, even though no one has any fixed answers. It’s very helpful to come to know the world and yourself a little better before deciding on your career and future.”

While other first-year programs encourage students to enrol in a range of classes to find their major, this interdisciplinary program offers similar breadth in one course. Students attend two-hour lectures, followed by smaller discussion groups, four days per week. The books and eras they discuss change with each lecture. Professors from multiple disciplines at King’s and Dalhousie University deliver the lectures.

“Students have different interests and different learning strengths,” says William Lahey, president of King’s. “It’s a benefit to be exposed to a range of people and teaching styles in your first year.”

In addition to FYP, students are encouraged to enrol in an elective class, such as journalism at King’s or an arts or science course from Dalhousie.

The fact that King’s students study at Dalhousie reflects the schools’ special relationship. King George III chartered the university in 1802, when it was in Windsor, N.S. In 1920, the school burned to the ground. Nine years later, it was rebuilt on the corner of Dalhousie’s grounds. Since 1929, these independent universities have been joined academically through shared faculties of arts and social sciences, and science. The relationship is modelled on the University of Oxford in England. King’s and Dal offer joint undergraduate degrees in arts, science and music, as well as a number of graduate degrees. King’s also features one of the country’s best-known journalism programs.

King’s students enjoy the beneﬁts of attending a 1,000-student college with a 15:1 student-teacher ratio; they also have access to a research university that offers a broader range of courses, services and extracurricular opportunities, says Lahey.

RELATED: Yes, you will get a job with that arts degree

The close-knit King’s community is one of the biggest perks for second-year student Kate Barkhouse from Dartmouth, N.S. “It can be intimidating to walk up to a professor you’ve never met before at the front of the lecture hall and ask a question,” says Barkhouse. “To have a professor who’s assigned to you [as a tutor], whom you get to know and feel comfortable asking questions, is great.”

A writing coach helps students improve their writing skills to prepare for the essays that they submit every two weeks in FYP. “I became a much better writer,” says Zargarpour. “Reading the first paper versus the last one, [I’m] amazed to see the clarity and the grasp of the material I was able to achieve over those eight months.”

Residence dons are postgraduate students or young professionals who graduated from King’s. They don’t just say, “Lights out”; they act as academic mentors. In the days before papers are due, dons host Studies and Snacks, an evening drop-in session for those looking for assistance with and feedback on their papers.

“This is a place where students really care about each other and faculty care about students,” says Lahey. “Those kinds of relationships are nurtured by the FYP and by life together in residence. People develop deep relationships informed by dealing with writers who tackle the most intimate, elemental topics about the human condition: justice, love, grief, sorrow and beauty.”

This article appears in print in the 2020 University Rankings issue of Maclean’s magazine with the headline, “Small school, big ideas.’” Order a copy of the issue here or subscribe to the monthly print magazine here.