2016 Maclean's University Rankings: A letter from the editor

For 25 years, Maclean’s has helped Canadians make educated decisions about post-secondary education. This year we're back, bigger and better than ever. 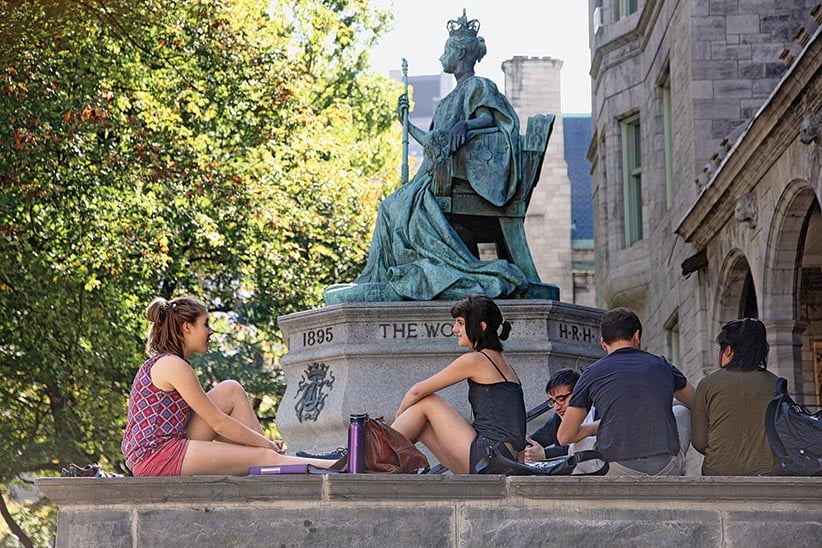 Students sit outside at McGill University in Montreal. (Photograph by Roger LeMoyne)

Twenty-five years ago, two Maclean’s editors with kids in high school realized there was no place to get comparative facts about universities. The glossy school brochures didn’t contain student-faculty ratios. There was no data on bursaries and scholarships. Average entering grades? Who knew? Over the next year they collected statistics on 46 schools and, when it was first published in 1991, the Maclean’s University Rankings sold out in three days. A second printing was ordered.

Reading the first issue triggers a case of déjà vu. The economy was shrinking and students were worried about jobs. Employment equity programs were addressing a disparity in the ratio of male to female faculty hired; pay equity wasn’t even on the table. Crowded classes and crumbling buildings were blamed on government cutbacks.

While some things remain the same, there has been a profound shift in the landscape. For one thing, there are almost a million full-time students at university, double the number in 1991. Tuition, around the $7,000 mark, has quadrupled, and covers about 50 per cent of a school’s operating budget, compared to 20 per cent 25 years ago. The great economic experiment to educate the workforce in order to dominate in the knowledge economy has been so successful that some students are getting a second, or even third, piece of paper. When an undergrad degree can cost $40,000 or more, the pressure to get it right—the right school, the right program—has never been higher.

Thankfully we live in an era where data is king. But there is still is no central place to get as much information about universities as you get from the Maclean’s University Rankings.

We are not coasting on our reputation. This year we have updated, expanded and modernized. In response to students who wanted an objective way to evaluate programs, we published our first Programs Guide with a Top 20 ranking of 10 programs (now on newsstands; coming soon to the Maclean’s app and the Rogers Publishing eStore). We’ve added two third-party indicators to the rankings: a student-satisfaction measure and citations. And, on Nov. 29, we will publish a brand new Guide to Colleges, in recognition of the growing role they play in the lives of our youth.

All of this will feed into Macleans.ca/education, a new web hub that will organize and present our content in an easy-to-read, mobile-friendly format. Every publicly funded English institution will have a profile page, and the searchable rankings tables will live there.

More than just rankings, though, this issue is about students and their stories. As always, we hope they will help you excel. To celebrate our 25th, we asked 25 people born the year our rankings were first published to tell us how their university choices played out.

For the stress balls who are paralyzed with indecision, I leave the second-last word to University of Guelph student Damian Matheson, who just graduated with a four-year degree in criminal justice and public policy, but has turned away from his initial career goal to be a lawyer. “Fail forward and fail fast,” he says. “It’s so hard to do in university. But try something and figure out if you like it. If it doesn’t work or you don’t like it, great, you learn from it and move on.”

My refrain is much the same: There is no such thing as a bad education. You live and you learn. Maclean’s is here, as it has been for 25 years, to help you make the most educated decisions you can.