Where to find the best place to study, cheap lunch, favourite watering hole and more 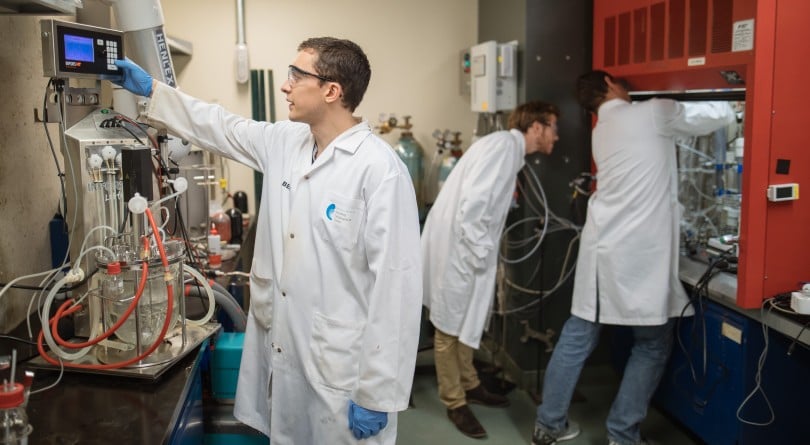 Left to right: Ph.D. students Beau Schlageter, Robin Jeandroz, and Petr Kolosov working at a lab in the chemical engineering department at McGill University in Montreal on Thursday, October 19, 2017. (Photograph by Dario Ayala)

Unofficial school motto: ‘Work hard, play hard’
Best cheap lunch: Any of the samosa sales that are guaranteed to be happening on campus. Hard to beat the three-for-$2 deal!
Best hangover breakfast: Beauty’s Luncheonette! Lines sprawl onto Mont-Royal Avenue on Saturdays and Sundays, but it’s definitely worth the wait to get your bagel fix. This charming diner is a true Montreal institution.
Favourite watering hole: Gerts (’til it hurts!). McGill’s student bar is a pretty safe bet whether you’re planning a fun night out with friends or just want to unwind with a cold one after the library.
Where to live: For proximity, the McGill student ghetto is where it’s at. If you’re looking for a neighbourhood with more character, replete with cafés and delicious eats, the Plateau is certainly the place to be.
Best place to study: Cozy up with a latte at one of Montreal’s many inviting (and highly Instagrammable) cafés. Some of my favourites? Leaves Café, Crew Collective, Café OSMO and Café Origine.
Best campus event: There’s a reason McGill’s Open-Air Pub (OAP) is known as The Best Place On Earth. For just two short (but oh-so-sweet) weeks in the fall, and a few bonus days in the spring, the lower field turns into an oasis of cheap beer, burgers and live music.
Weirdest tradition: Winter Carnival. The one week per year when it becomes normal to see students roaming the streets in animal onesies.

McGillians ARE A diverse, eclectic and international crew, but there are two common traits that unite the majority of us: first, a strong commitment to academics; second, a desire to have a whole lot of fun. Your average McGill graduate will leave Montreal with an embarrassing story (or two) from a night out at Tokyo Bar, a CV filled with unique and diverse extracurriculars, a squad of incredible friends and a prestigious diploma that has academic significance all over the world.

McGill students are independent and motivated. From Day 1, McGill freshmen are thrown into a world of mid-terms, -30° C winters, crazy parties and all-night study sessions. Set against the backdrop of cosmopolitan, cultural Montreal, the McGill bubble provides a haven where McGill students gather to study, work and socialize. A walk across campus is guaranteed to lead you past a slew of friendly faces. Throughout your time at McGill, you’ll accumulate a cherished collection of peers and pals—from that girl from your floor in rez, to that guy you work with at the campus newspaper, to your best friend from first-year econ.

Life at McGill can be stressful and overwhelming, but it is also exciting and inspiring. McGill hopefuls should be prepared to put in the long hours of work, but the education—and seriously fun time—will be so worth it in the end.

Extras
Freshman orientation (Frosh Week) at McGill is virtually unbeatable. New students are immersed in McGill and Montreal culture through a week of social events, including a sunset boat cruise and a legendary day at Montreal’s Beach Club. You’ll be introduced to the trademark McGill chants, get valuable survival tips from upper-year students and make instant friends who will last right through graduation. Frosh is so much fun that second- and third-year students itch to come back as leaders, staffers or co-ords—just so they can once more chant, “Beach day, every day!”

Local Vibe
Montreal’s classification by QS as “the world’s best city for students” is apt. This town truly has it all: buzzing nightlife, incredible foodie eats, an unparalleled music and art scene and so much more. McGill is located in the heart of Montreal’s downtown core, meaning that students can escape the McGill bubble easily to take advantage of everything the 514 offers.

Montreal’s bilingual culture sets it apart from other university towns. While students have the opportunity to parle en Français, Anglo-speakers needn’t worry—most of the city speaks English, too.

The city’s Mount Royal Park offers a relaxing escape from the cosmopolitan vibe. In the summer, people flock to the park with picnics and bottles of rosé. In the colder months, Mount Royal offers the best cross-country skiing, skating and tobogganing on the Island.

The Skinny
For campus news and events, visit ssmu.ca.