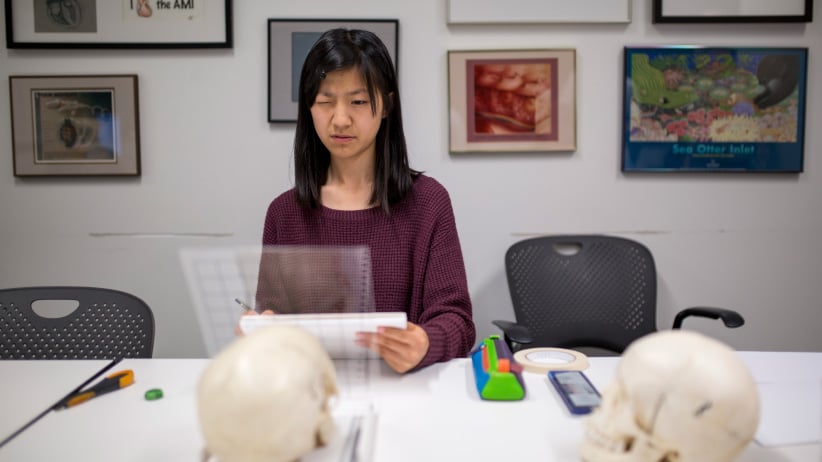 A Medical Illustration student at University of Toronto. (Photograph by Nick Iwanyshyn)

The rankings use the most recent and publicly available data. Statistics Canada provides student numbers, as well as data for total research income and ﬁve ﬁnancial indicators: operating budget; spending on student services; scholarships and bursaries; library expenses; and acquisitions. Financial ﬁgures are for ﬁscal year 2015-16; student numbers are for 2014. In recent years, Statistics Canada did not collect faculty numbers, so the 2015 ﬁgures were obtained directly from the universities. (Statistics Canada has resumed collecting faculty numbers, but the data were not ready for release in time to meet this year’s ranking deadline.) Data for the social sciences and humanities research grants indicator and the medical-science research grants indicator are for ﬁscal year 2016-17 and were obtained directly from the three major federal granting agencies: the Social Sciences and Humanities Research Council (SSHRC), the Natural Sciences and Engineering Research Council of Canada (NSERC) and the Canadian Institutes of Health Research (CIHR). In addition,
Maclean’s collects information on dozens of student and faculty awards, and conducts a reputational survey, canvassing the opinions of university faculty and senior administrators, high school guidance counsellors and a variety of business people. Two new indicators were added in 2015: a major survey of students asking them about their university experience; and a measure of the amount and impact of the faculty’s published research.

(28 per cent of ﬁnal score)
Maclean’s collects data on the success of students at winning national academic awards (weighted 10 per cent) over the previous ﬁve years. The count includes such prestigious awards as the Rhodes scholarships and the Fulbright awards, as well as scholarships from professional associations and the three federal granting agencies. Each university’s total of student awards is divided by its number of full-time students, yielding a per-student count.

In 2015, a new indicator was added to provide an important element to the overall assessment: student satisfaction (10 per cent). Maclean’s surveyed thousands of students, asking them about their experience on campus. In the end, 23,988 students responded to the 10 questions that make up the indicator. We asked students to rate their course instructors (professors and lecturers), student-life staff, administrative staff and academic advising staff, as well as how much red tape they encounter. Opportunities for extracurricular activities and residence life were evaluated, as well as three increasingly important areas: opportunities for experiential learning, mental health services and the university’s actions to prevent sexual assault on campus. The question on course instructors contributed the most weight to this indicator, at 25 per cent; extracurricular contributed 15 per cent; the other eight questions contributed 5 to 10 per cent each.

In 2015, Maclean’s introduced a bibliometric indicator, which measures the number of research publications produced by faculty. It also assesses the impact of this scholarly output within the scientiﬁc and academic community by measuring how often the works are cited by other researchers over the course of the past ﬁve years (ﬁve per cent). Two measures contribute equally to the assessment. A ﬁeld-weighted citation impact measure shows how often a work is cited, adjusted to reflect the global expectation in a given discipline.

To broaden the scope of the research picture, Maclean’s also measures total research dollars (six per cent). This ﬁgure, calculated relative to the size of each institution’s full-time faculty, includes income from sponsored research, such as grants and contracts, federal, provincial and foreign-government funding, and funding from non-governmental organizations.

counts the proportion of out-of-province students and international students in the ﬁrst-year undergraduate class, as well as the percentage of international graduate students for schools in the Medical Doctoral and Comprehensive categories.