Midwives are in demand across Canada, and students are keen to train. But universities can only admit 150 annually. 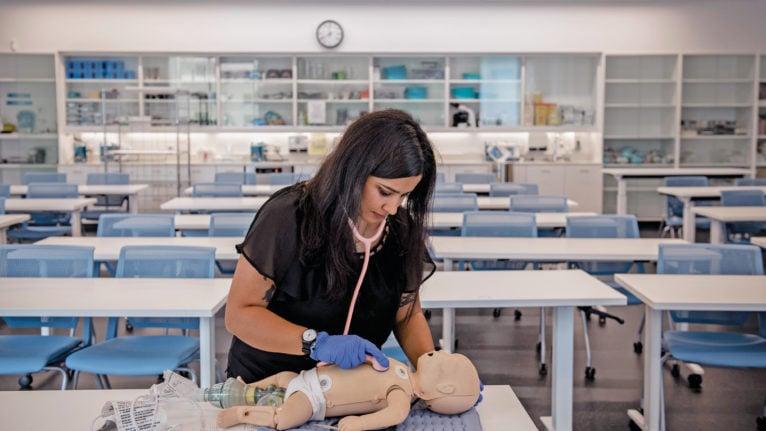 Midwifery seemed like a natural fit for Maha Maryam. Growing up in Markham, Ont., she was surrounded by women supporting each other during pregnancy, childbirth and motherhood. “My mom always had her pregnant relatives over, especially as they got closer to delivery,” recalls Maryam. “That is something I grew up seeing, how our culture handles pregnancy and childbirth.”

Almost 20 years later, Maryam is now in her third year of midwifery studies at Ryerson University and is convinced she made the right career decision. “I love that midwifery emphasizes choice and information for pregnant people, and I love that we are able to work both in the health-care system and also in people’s homes,” she says.

Maryam, however, is one of a relatively small number of students able to study midwifery in Canada at all. Just seven schools offer four-year undergraduate midwifery degrees, admitting about 150 students in total. And snagging one of those limited seats is no easy feat. It requires a high GPA and an impressive extracurricular resumé. Many schools’ admission processes include a series of in-person interviews. Even the biggest programs in the country admit only 30 students each per year. Maryam got into the Ryerson program on her first try, but she had already completed most of an undergraduate degree in the cognitive science of language at McMaster University, and she speaks three languages: English, Urdu and American sign language. “Some people take up to five or six tries, and that’s fairly normal,” Maryam says. 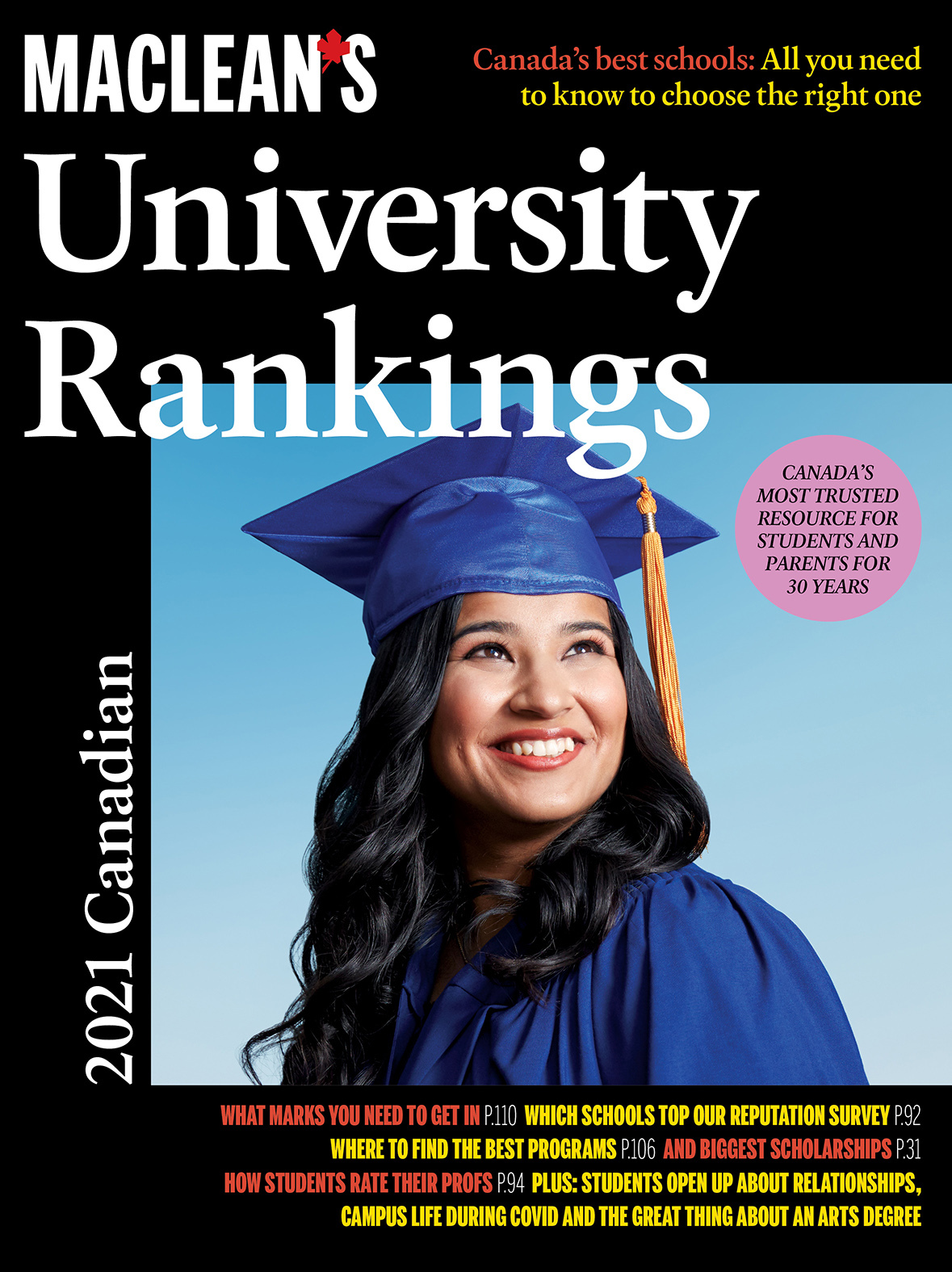 So just add more seats to these in-demand programs, right? Unfortunately, it isn’t as easy as that. Increasing capacity in Canadian midwifery schools requires a huge amount of government will, backed up with funding to add seats in new programs and create jobs for new grads. Even if an existing program gets the green light to expand, it must do so slowly. It’s a tricky balance; there are only so many midwives already in the field who can train student midwives.

Professional midwifery is a fairly new field in Canada. Three universities in Ontario—Ryerson, McMaster and Laurentian—were the first to offer midwifery degree programs, all of which started in 1993. Ontario and Alberta were the first provinces to regulate the profession in 1994. Most other provinces followed suit: B.C. in 1998, Quebec in 1999. By 2016, all provinces and territories, except for P.E.I. and the Yukon, had both regulated and funded midwifery. 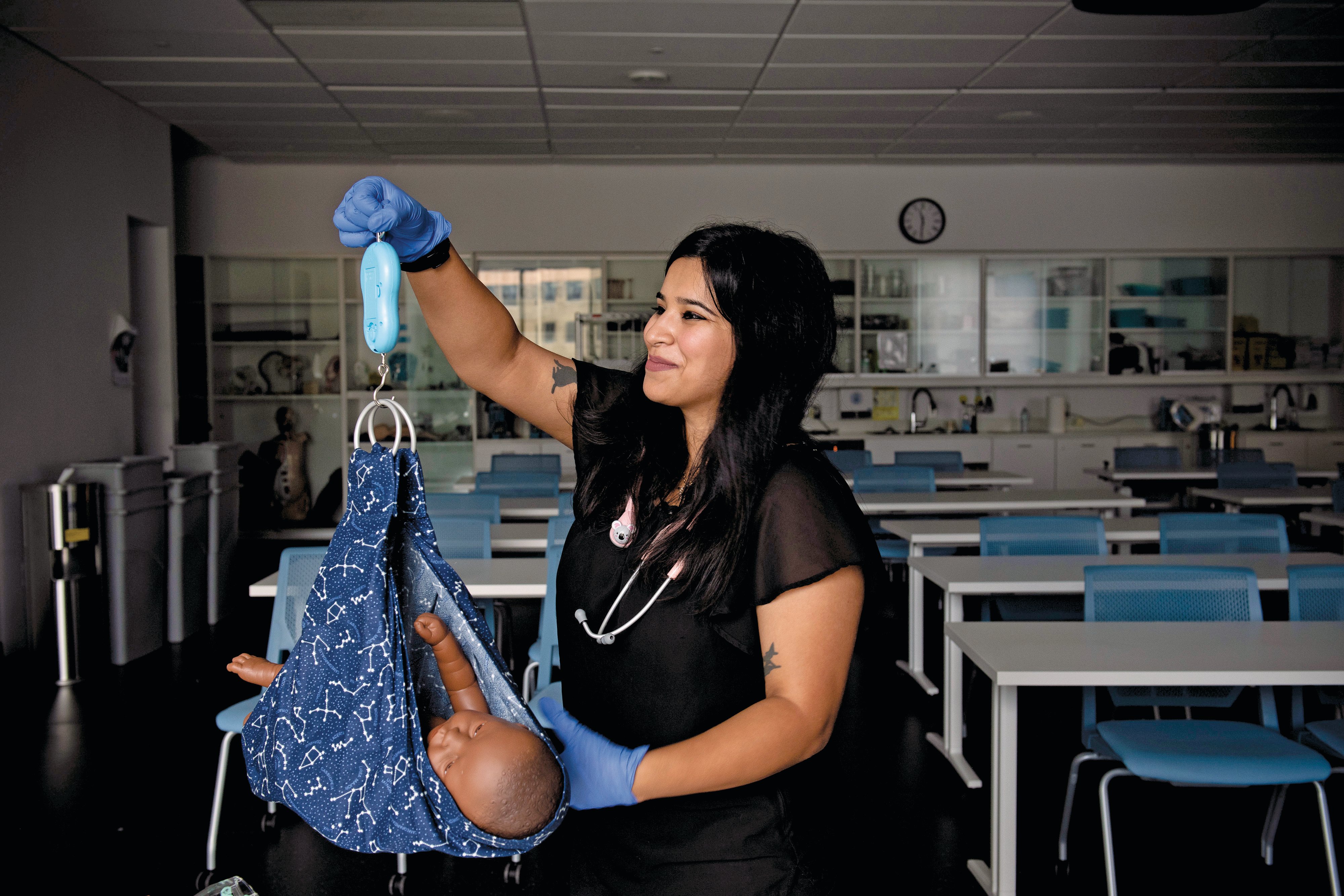 As more midwives were allowed to practise in Canada, demand for their services also surged. Midwifery is built on the idea of letting pregnant women make informed choices about planning their own care, as well as the care of their newborn. For many, this option can be appealing; it feels more nurturing and less rushed than the traditional medical system. But resources for midwifery care are limited and can vary widely from region to region. “We’re not meeting the demand in Ontario, even though we have the largest number of midwives in the country,” says Liz Darling, director of the midwifery program at McMaster. (Of 1,700 midwives in Canada, 900 are in Ontario.) “There are some places that are far less served than Ontario.”

Across Canada, B.C. has the highest percentage of midwife-attended births, at 22 per cent. Though the province doesn’t officially track overall demand, the Midwives Association of British Columbia says that clinics are regularly full and must turn away potential patients. Ontario has the second-highest percentage of midwife-attended births, at 16 per cent. The most recent data shows that between April 1, 2017, and March 30, 2018, more than 5,000 women who wanted access to midwifery services in Ontario were turned away because the practice where they requested services was full.

The birth of a program

The University of Manitoba has the newest midwifery program in the country, set to begin in the fall of 2021. Students can take prerequisite courses this year before applying to the program, which was in the works for almost two years before finally getting the provincial green light this past spring. This left the university celebrating, but also scrambling, amid the country-wide coronavirus shutdown. “We had been waiting for over a year, and provincial approval came in the middle of a pandemic,” says program director Kellie Thiessen. 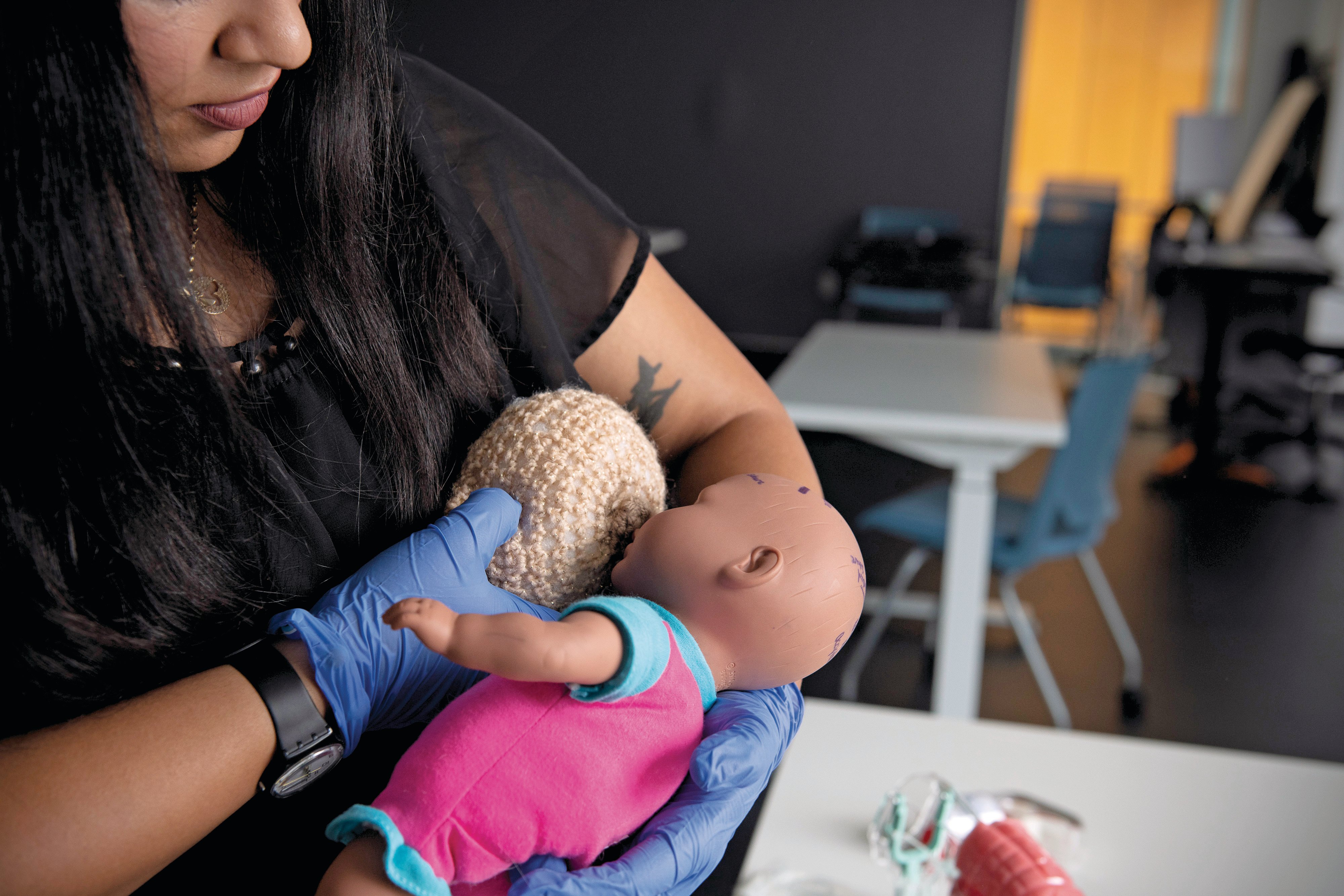 The Manitoba program is intentionally small, admitting only six students per year, for a total of 18 students when the program is at capacity in its third year of operation. “We don’t have enough provincial clinical placements to accommodate more than 12 students at any one time,” says Thiessen. This fact highlights a common challenge in midwifery programs. In the case of Manitoba, there are nearly 60 practising midwives in the province, and about six per cent of births are attended by a midwife. A good part of midwifery education requires hands-on rotations in clinical practices, so practising midwives will be asked to become clinical preceptors (or instructors) for the students. Not all working midwives will want or be able to take on students, and not all midwives are based in Winnipeg, where the program runs. Thiessen hopes the program can eventually scale up.

Ensuring the new University of Manitoba program starts small and grows gradually is paramount, in part because the province has already failed once. An attempt in 2006 to introduce a midwifery program at University College of the North (UCN) in The Pas, Man., a town more than 600 km northwest of Winnipeg, proved ill-fated. The idea was to train Indigenous midwives, who would then provide culturally appropriate services in their home communities and reduce the need for women to travel hundreds of kilometres south to Winnipeg to give birth. But while the UCN program also started small, enrolling six midwifery students in its first year, it suffered in the end from a lack of clinical placements. Simply put: there weren’t enough births for students to attend in nearby communities, according to Dan Smith, UCN’s vice-president academic and research. Out of 28 admitted students, UCN produced just nine graduates before the program was permanently shuttered in 2016.

Thiessen knows the stakes are high. “We are trying to strategically align ourselves with the priorities in the province so it is sustainable, and it doesn’t have to be stopped and started,” she says. “That’s not how you grow a profession. At the end of the day, the women don’t get the services.”

Expanding midwifery services and education goes beyond adding more jobs and more seats. One of the big conversations happening across the profession is how to reach more people—and from a wider diversity of backgrounds. “We need to think about trying to ensure that we have midwives who are working in areas that are less served,” says Darling, who studied in the McMaster midwifery program in the ’90s before becoming director of the program in 2018. Areas of focus could include new immigrant communities, the North and other rural and remote places. 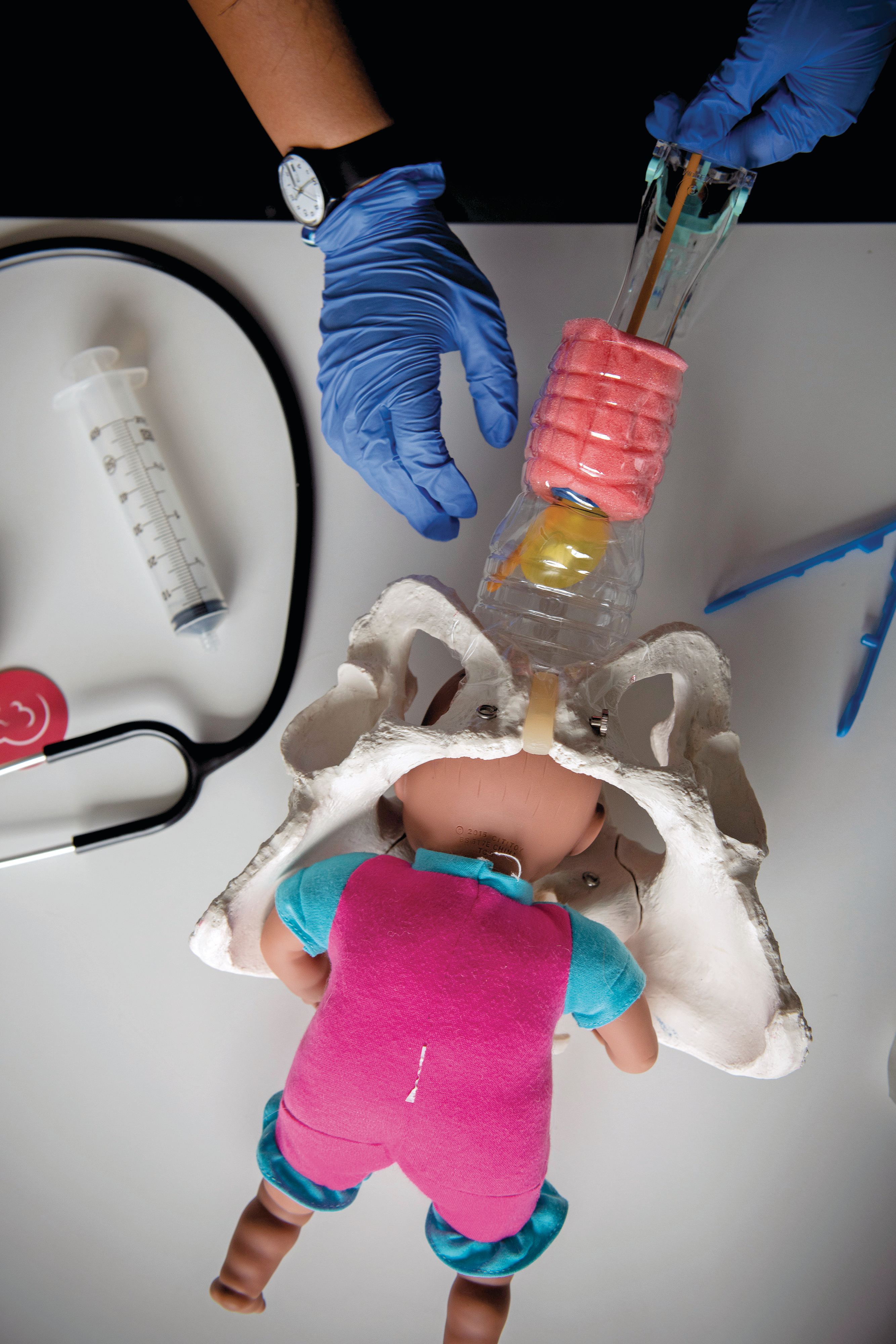 using props she made from plastic bottles, Maryam shows the steps that lead to birth (Photograph by Kiana Hayeri)

The profession is looking at itself in the mirror and asking how to make its members better reflect the population of Canada. “We still, overall, tend to be accessed more by people of higher socioeconomic status, and our profession tends to be white and middle- class,” says Darling. “So, we’re thinking about how, as education grows, we make the program accessible and increase the diversity within the practice.”

Many programs are already taking steps to do better. In a province where, according to Statistics Canada, 18 per cent of the population identified as Aboriginal in 2016, the new University of Manitoba program will hold three of its six seats for Indigenous applicants. It will also embed competencies developed by the National Aboriginal Council of Midwives in its curriculum. A decade from now, Thiessen envisions offering midwifery education programs developed in collaboration with northern communities. “My hope is that we have really positive relationships in our northern communities, potentially satelliting our program and adapting it to meet their needs,” she says.

Part of the push to diversify programs is also student-driven, and women like Maryam lead the charge. Since she started at Ryerson, Maryam has volunteered with the Student Midwives Association of Canada and sits as a student representative on the Canadian Association of Midwives. She’s realistic about the challenges ahead. “I would really love to see more spots,” Maryam says. “I am really committed to the growth of midwifery and especially to increasing diversity in the profession. I’ve volunteered for our admissions sessions because I really care about helping applicants get in. But it’s always a struggle about how to get more clinical preceptors and how to get more funding.”