Students, often immigrants, are standing on the shoulders of "1,000 Women: A Million Possibilities" 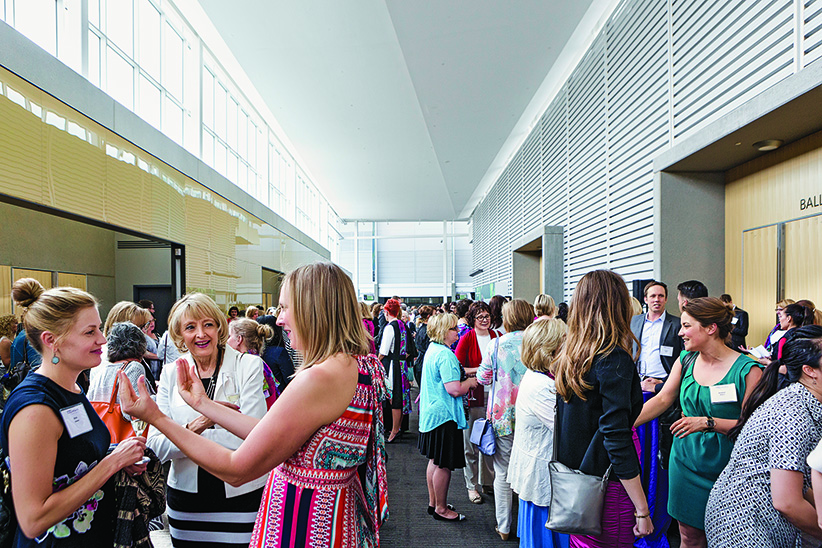 Support circle: An infusion of cash from NorQuest’s endowment fund for women can be a lifeline for students struggling to stay in school

Two years ago, Hawa Sheriff, a single mom, was losing her way.* The 24-year-old Liberian refugee was in her third year of an academic upgrading program at NorQuest College in Edmonton. Bills were piling up at home and panic set in. To make ends meet, she’d have to drop out and get a full-time job. “Education means everything to me. Everything,” says Sheriff, who wants to be a social worker.

As her financial troubles mounted, Sheriff was volunteering with the college’s RBC Student Ambassador program, promoting the school’s courses and services in the community. That’s where she heard of a resource that would be her lifeline—“1,000 Women: A Million Possibilities.”

“It all started with 15 community-minded women who identified that if we could find 1,000 women to give $1,000 each, we would be able to create a million-dollar endowment,” says Jodi Abbott, NorQuest president and CEO, one of the group’s founders. The group gets most donations at annual luncheons. According to Abbott, they hope for $1,000 from each donor, but are happy to accept any donation.

In 2010, they hit their $1-million target and set up a fund to help students with one-time grants of up to $1,500 to pay for living expenses. Sheriff’s bursary of a few hundred dollars from that fund helped her get caught up on bills and, most importantly, stay in school. (Student loans cover her tuition and books.)

Many of the founding members (teachers, school counsellors and business leaders) were mentoring NorQuest students with issues ranging from integration into Canadian culture to career guidance. As they delved into the students’ lives, it became clear that a small infusion of cash would go a long way to keeping many of them in school. “We had a student who was doing really well, then started to slide,” remembers Abbott. “We learned that she had to move far from NorQuest and couldn’t afford a bus pass.” The student was walking two hours to school—each way. “Providing emergency funding for a bus pass turned her life around,” says Abbott.

Today the roster of donors and volunteers has grown. “We have young women just entering the workforce, partners from some of the big industries in the city, veteran philanthropists,” says Abbott.

In 2012, 1,000 Women raised another $1 million to build a daycare centre on campus with 56 subsidized spots; it will open next fall at the new Singhmar Centre for Learning. In June 2016, the group began its third campaign to raise $1 million, to help students pay for tuition (as of mid-October, it had raised approximately $200,000). “If you know the profile of our student body, these are extremely important gifts of kindness,” says Sheila Witwicky, chair of the 1,000 Women advisory committee. Of the school’s 11,500 students, 57 per cent were born outside Canada, 65 per cent are women and nearly 40 per cent have at least one dependant.

Sheriff is in her fifth year of academic upgrading and poised to graduate in 2017, when she hopes to study social work at NorQuest. She now uses her experience to raise awareness for the fundraising efforts of 1,000 Women, because paying it forward is important. “I said to myself, ‘I don’t have $1,000, but I can give my time and my voice.’ ”

Correction: An earlier version of this post misspelled the name of Hawa Sheriff. Maclean’s regrets the error.