Partying is not SFU's strength. Many students are fine with that.

Beautiful views, solid academics and lots of dogs on campus: Simon Fraser has plenty to offer. But most people go home after class. 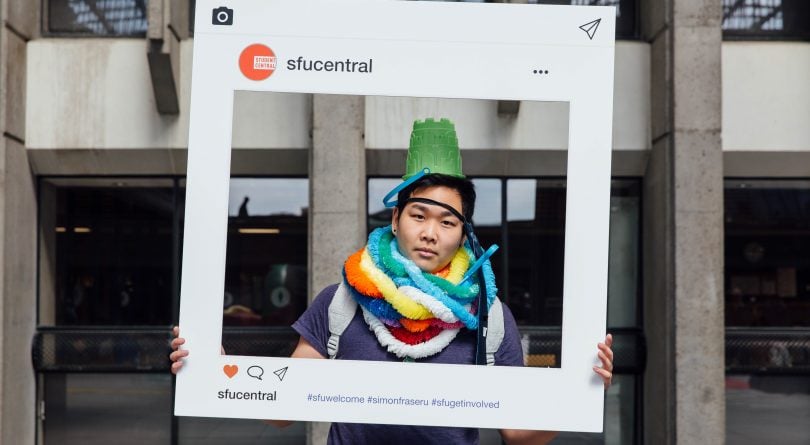 Not everyone wants to go to a frat party. Some SFU students deliberately avoided going to a party school (Photograph by Jackie Dives)

Academically rigorous with great co-op programs and stellar mountain views, Simon Fraser University (SFU) has a lot going for it. It’s Maclean’s top-ranked comprehensive university: there’s a strong focus on research, and the school itself offers a wide range of programs for both undergraduates and graduates, including professional degrees. In 2016, it became the ﬁrst Canadian school to receive accreditation from the Northwest Commission on Colleges and Universities, a reputation-boosting move that also means its athletes can participate in the National Collegiate Athletic Association (NCAA). There are apparently lots of good doggos on campus—one professor in the English department even brings her corgi to class on Thursdays. And the Burnaby campus is on a mountain, so the views really are great. (There are two other campuses in Surrey and Vancouver.) But when it comes to partying . . . well, let’s just say that doesn’t seem to be SFU’s strength.

In fact, the school lands near the bottom of the Maclean’s party school ranking. (Last year, the school was at the very bottom.) Students here say they spend just three hours cutting loose per week, a far cry from their hard-partying peers at St. Francis Xavier, who say they spend 10.6 hours per week doing the same. Current and former students have lots of ideas why.

For many, it’s the mountain, at least at the Burnaby campus, which is the school’s oldest and biggest. This location (unsurprisingly) can make the school feel isolated. Taylor Doberstein graduated in 2015 with a bachelor’s degree in arts with a major in psychology, and she says the campus’s location has always had a chilling effect on students’ social lives. “Since it was so far away from shops and local bars, people wouldn’t really hang around. On the weekends, it was pretty much dead. Even the people staying on campus would try and get off the mountain.”

RELATED: What’s it like to be a non-drinker at a Canadian university?

Unfortunately, the campus itself doesn’t always entice students to stick around. It was designed by Canadian architect Arthur Erickson, whose modernist concrete structures make for cool photos. But cozy and welcoming? Not so much. “It can get quite depressing,” says 19-year-old Harleen Kaur, a third-year behavioural neuroscience student. “There are not a lot of places to sit and socialize. And it feels like it’s a prison of some sort. Many students want to leave campus right after they ﬁnish their classes.”

But the biggest factors may have more to do with culture than geography. Many students at all three of the school’s campuses are commuters, so they don’t tend to stick around after class. Asadullah Mamun, a second-year engineering student, travels four hours a day to the Burnaby campus and says his experience isn’t uncommon. “Most people don’t really have time to socialize,” he says. “They come to school and leave immediately after because the commute takes so long.” That’s not always a bad thing: in 2016, The Peak, SFU’s student newspaper, published an op-ed praising SFU’s commuter culture—or at least acknowledging that it’s an integral part of the school’s identity, and pointing out some of the side beneﬁts to taking transit. “At SFU, I ﬁnd myself surrounded with peers in the same situation,” wrote Amneet Mann. “The common question then becomes not ‘What dorm do you live in?’ but rather ‘What bus do you take down the mountain?’ And in the year that I’ve been asking and answering that question, I’ve gotten to know a lot more people through commuting together than sitting in lecture.”

The abundance of commuting students,  combined with the school’s high academic standards, seems to contribute to a culture that doesn’t prioritize partying. “Most people come here to just ﬁnish their degree and leave,” Mamun says. “And the majority of students are content with that.”

Of course, there’s some socializing. “I would say that most people at SFU are very friendly if you happen to talk to them. They are willing to help you with directions if you ask, and most people I encounter in lectures are happy to make a buddy in class,” says second-year student Sarah Duncan. But, she says, they’re not likely to invite you to a party. “Like most full-time students, a lot of people on campus are simply rushing to get places or napping in the library. They mind their own business and avoid each other unless you approach them with a speciﬁc question.”

For many students, that’s what they expected—and often what they were seeking. Duncan says, when she was looking at schools, she deliberately avoided party schools. And Doberstein says she was in a relationship and very serious about her studies, so she wasn’t really looking for keg stands and frat parties.

But for some, it was a disappointment.

“I had heard that university is what you make of it, and I was hoping that would be the case for me,” Kaur says. “It would be nice to at least have the option to go to a party every once a while. I feel upset that I won’t get that experience or make any memories of that kind. I haven’t been given that opportunity to grow socially.”

However, the university is working to improve student life on campus. Its ongoing Student Experience Initiative (SEI) has identiﬁed eight key action areas, including making the campuses more inviting, creating opportunities—and spaces—for commuting students to stay on campus between classes, and building a sense of community. Two of the SEI’s projects might even have a direct impact on SFU’s party school reputation: The Study, a new bar-meets-arcade, just opened in the middle of the Burnaby campus in the same space that the Highland Pub used to occupy. And the new student union building, which is set to open this year after several delays, will have a lounge that includes a DJ booth and stage to encourage mingling.

“I would say that the social scene at SFU is in a transition mode. The school is deﬁnitely trying to implement a better social environment,” Duncan says.

This article appears in print in the 2020 University Rankings issue of Maclean’s magazine with the headline, “(Not) here for a good time.” Order a copy of the issue here or subscribe to the monthly print magazine here.