Polytechnics shouldn't be an afterthought for students

Whatever name they go by, polytechnics offer hands-on experience and skills training, so students are employable even before they leave campus 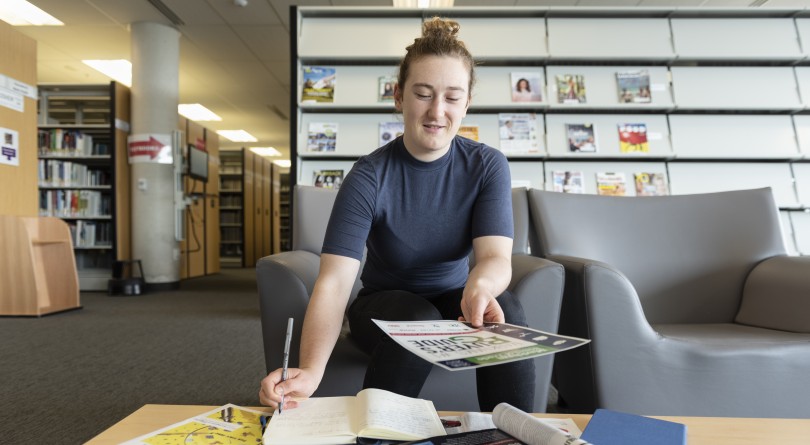 Vanessa Bennett working on her portfolio at Humber College. (Photograph by Lucy Lu)

Vanessa Bennett was at odds with her parents about life after high school. They pushed university. She wanted real-world, hands-on training for a career in advertising.

Bennett completed one year of media studies in a university program, but it was more focused on theory and journalism. It still wasn’t what she wanted, so she transferred to the bachelor of creative advertising program at Humber College. Bingo. “Almost every class, we were doing what we would probably be doing in the workplace,” she says. The polytechnic program included plenty of lab time to hone her skills on graphic design software and assignments were based on ad designs and scripts for real companies. Going the polytechnic route to a degree gave Bennett just what she was looking for: a comprehensive four-year program that included hands-on learning from the outset.

When Bennett graduates in fall 2019 with an honours degree, she will have a professional portfolio, experience working with corporate clients and the confidence to go after a job as a copywriter in Toronto’s competitive advertising industry. “I feel more prepared than average,” she says. Having seen the work from other advertising programs, Bennett thinks Humber College students have an advantage. “We’re making ads that our audience will identify with.”

Students like Bennett now demand post-secondary educations that supply needed skills for immediate post-graduation employment. Polytechnics meet that demand. Blending aspects of college and university educations, polytechnics are often the best option for students who want real-world experience before they ever don their cap and gown.

Polytechnics today can prepare students for careers in fields ranging from health care to new media to the trades, but all of these schools share a few defining characteristics.

They focus on ensuring students have the skills needed for jobs requiring technical precision right after graduation. “These are highly skilled professions and occupations we are training people for,” says Nobina Robinson, CEO of Polytechnics Canada, a national advocacy group. Polytechnics also offer a range of credentials including diplomas, certificates, in-class apprenticeship training and four-year applied degrees. There is still some confusion over what “polytechnic” means—partly because schools don’t always label themselves as one.

Kwantlen Polytechnic University in Metro Vancouver and Saskatchewan Polytechnic are, of course, polytechnics, but so are Humber College, Seneca College and Red River College in Manitoba, to name a few.

In some circumstances, employment rates for polytechnic grads are even higher. At the Northern Alberta Institute of Technology (NAIT), in Edmonton, the school of health and life sciences boasts a 95 per cent employment rate nine months after graduation. Akshya Dookhun is one of those highly employable grads. Dookhun knew she wanted to work in medicine, studying science at the University of Alberta for one year before applying to NAIT’s three-year respiratory therapy diploma program. Her program involved 1,500 hours of clinical training, in addition to class work and using a simulator on campus. “I’m so glad that I went to NAIT,” says Dookhun. “It really made me feel like ‘OK, I can do this job.’ ” She landed a job at the Stollery Children’s Hospital in Edmonton immediately after she graduated in May 2018.

With her specialized training to aid patients with heart and lung disorders, Dookhun has the option to work in hospitals and also in private clinics (starting wages in respiratory therapy are comparable to nursing). Right now, she rotates through different areas of the hospital, so no two days are the same. “I love what the job represents,” she says. “I love being a therapist to patients [who are], sometimes, in their worst and scariest moments and being a compassionate person to help them through that.”

In addition to offering better-than-average odds of employment, some Canadian polytechnics are taking further steps to compete for top students. Humber College and Seneca College announced a new partnership in May 2018 making it easier for students to transfer between the schools. The partnership seeks to maximize the number of transferable credits and align curricula between programs. With Humber in the southwest part of Toronto and Seneca in the northeast, the two big polytechnics haven’t always been so cozy. “We’ve been, traditionally, the big cross-town rivals,” Seneca president David Agnew says. However, in the face of stiff competition from other post-secondary options, Seneca and Humber have pledged to work together.

Both Agnew and Humber College president Chris Whitaker emphasize that the partnership eases life for students. A student could start with a Seneca diploma in graphic design and then transfer to Humber to finish a degree in creative advertising, Bennett’s current program. Likewise, a student could move from the Humber computer programmer diploma to complete a degree in software development at Seneca.

Humber and Seneca will also consult one another when developing any new programs, looking at areas where they can co-operate, instead of compete, says Agnew. “The more that we can contribute to building that highly skilled workforce that is so much in demand, the better,” says Agnew. “Our programs are designed to produce job-ready graduates from a huge range.”

This easy collaboration is something that doesn’t always happen between institutions. When Dookhun transferred from the University of Alberta to her respiratory therapy diploma, none of her credits transferred over. More often, students move from a college diploma program to a university degree program and credit transfer is often poor, notes Whitaker. Some credits aren’t recognized and a student will have to redo coursework. “What we are trying to do is develop pathways that give students full credit for the time that they spend in college,” Whitaker says. “They can complete a four-year degree, if they choose to do so, in better time and at better cost than if they were to go to a university.”

Jeff Clemens is a “finishing school” success story. Clemens completed an English degree at the University of Calgary in 2007 and taught in Japan for one year before coming back to Calgary. “When I got back, I realized I wanted to do something else. An English degree is awesome, but I needed some kind of specialization.”

He applied to the two-year journalism diploma program at SAIT and was accepted. As part of his SAIT studies, Clemens did an internship with the Calgary Flames marketing department. It set the stage for his career. “Working with the Flames gave me the opportunity to really see that I could write, but then I could also do other things,” he says. “With social media, I had to work fast and get things out. I liked that real-time work.” Clemens credits his training with such a high-profile employer with helping him land his first job as a social media marketer after graduation.

After almost a decade working in various social media marketing roles, Clemens says he’s glad he went to university first and a polytechnic second. “I always joked when I was at SAIT that I did it backwards. But going to SAIT, I got the actual skills. I already knew how to learn, so I could get as much as I wanted out of it.” Clemens recently started a new job as a program co-ordinator for the school of creative technologies at Bow Valley College in Calgary. He’s developing new programs for the college and has also instructed digital marketing classes.

While polytechnics in the Toronto area are working together, Aurora College in the North wants to forge ahead and become a polytechnic. The Northwest Territories government thinks that may be the best way forward for the troubled college, which has been operating without a board of governors for more than a year and has suspended intake into its teaching and social work programs. College president Jane Arychuk also departed right before a critical report was tabled in the NWT legislature, citing “personal reasons.”

Caroline Cochrane, NWT minister of education, culture and employment, is adamant that Aurora College will become Northern Canada Polytechnic University, as recommended in a consultant’s review and report released in May 2018. “It’s not a matter of if, it’s a matter of when,” Cochrane says. “We need to work toward this. We need to be recognized and have proper education for our students here in the Northwest Territories.” She notes Indigenous studies and climate-change research as two areas where a northern polytechnic university could excel.

While Cochrane is optimistic, the project is ambitious. The report’s recommended timelines—to start changes by fall 2018 and to offer the first polytechnic programming by 2024—are tight. Efforts to move quickly may also be hindered by the residents of Fort Smith, a town of 2,000 people near the Alberta–NWT border. Aurora College is currently headquartered in Fort Smith, with satellite campuses in Yellowknife and Inuvik. The report recommends moving the new polytechnic’s main campus to Yellowknife. So its current town created a special committee specifically to oppose the move and says the report is based on “poor methodology, flimsy statistics and doesn’t impartially represent the facts of post-secondary education in the NWT.”

The report noted that Aurora College has suffered from the problem of “trying to be ‘everything to everybody’ ” and it’s possible that, by setting its sights on becoming a polytechnic, Aurora College may repeat past mistakes. Robinson, of Polytechnics Canada, says that all of her organization’s current members are large, urban-based institutions with a wide range of training options. She wonders whether Aurora College should look at adding university degrees instead. “I’m sure that what Aurora College wants is to offer credentials and high-quality learning that keeps its population back home,” she says. “Now, is a university the way to go, or is a polytechnic the way to go?”

While Robinson might have reservations about Aurora College transitioning into a polytechnic, she contends polytechnics in general will play an important role in meeting the needs of the Canadian economy in the years to come. Robinson says she wishes students, parents and counsellors could see polytechnics as the primary destination and not an afterthought. “We still have parents who want their kids to go to university,” she says, “or guidance counsellors only presenting university as the primary destination.