Sports engineering relies on physics, computer modelling and even robotics to figure out how to improve performance 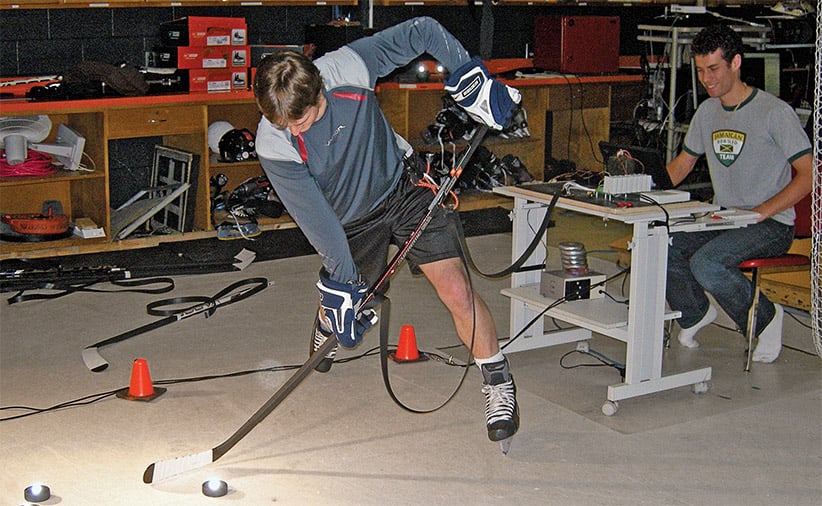 Brock Laschowski was 48 hours from his master’s thesis deadline. The 27-year-old engineering student already had a postgrad degree in kinesiology, so he’d been through this before. But he’d just returned from presenting at two conferences, one in the Netherlands, so he should have been frantic. However, despite the looming deadline, Laschowski was full of energy. He just loves his subject.

Sport engineering is a small specialization. However, “as the incorporation of engineers and technology into sport grows,” says Laschowski, so does “demand for those looking to get into sport with a technical background.”

Students and researchers examine the science of sport—the drag caused by a sprinter’s clothing, for example, or the degree of torque required to hit a baseball. It’s a discipline that uses physics, computer modelling and even robotics to figure out how to maximize athletic performance.

No Canadian university has a dedicated sport engineering program. Waterloo only started offering it as a specialization within engineering two years ago. But students can find their way to it—typically through engineering or kinesiology. That’s especially true at universities with professors who specialize in sport. In addition to Waterloo, the Universities of Calgary, Ottawa, Manitoba, Saskatchewan, Alberta and British Columbia have faculty in the field.

Laschowski’s interest started during his undergraduate degree in kinesiology at the University of Toronto. Between his second and third years, he completed a summer internship at the Canadian Sport Institute, which offers guidance in training, medicine, nutrition and mental conditioning to Olympic and Paralympic athletes. His work with Team Canada world champions and gold medallists at the Ontario branch included engineering-based improvements to athletic performance.

Laschowski then found a home for his interest when he enrolled in his first master’s degree, at Western University. His supervisor was Volker Nolte, who teaches in the kinesiology department. Nolte has coached Western’s rowing program for nearly 25 years, leading both the men’s and women’s teams to multiple Ontario and national titles. “I’m in the very nice situation that I can apply what I study immediately to the practical situation,” Nolte says. He published research in 2009 that found shorter oars with wider blades are more efficient. During his research, Western’s rowers switched their oars to the new design.

Professors and students elsewhere have also found professional-level applications for their work. At McGill, the Ice Hockey Research Group has a long-running relationship with Bauer, a major manufacturer of hockey equipment. Professor David Pearsall has nurtured that relationship since joining McGill in 1995. “A number of people I’ve had as students have actually been hired by the company because of the expertise they developed,” he says.

Through research grants, the group has permitted graduate-level students to analyze and suggest improvements to equipment. They can test products through detailed processes such as 3D motion-capture technology—used to examine the spring-back of a hockey stick during a slapshot, for example. McGill works with Bauer to improve helmets, skates and sticks.

Laschowski’s current work focuses on Paralympic athletes in winter sports. He started a Ph.D. program in biomechanical engineering this fall at the University of Toronto, aided by a “fairly large” scholarship from the Natural Sciences and Engineering Research Council of Canada. His career will likely be academic—though engineering jobs with equipment manufacturers can pay reasonably well. But “they don’t do it for the money,” Laschowski says. “They do it for the ability to develop a product and then see it on TV Saturday night.”