There's a cooking-career gold mine in retirement homes 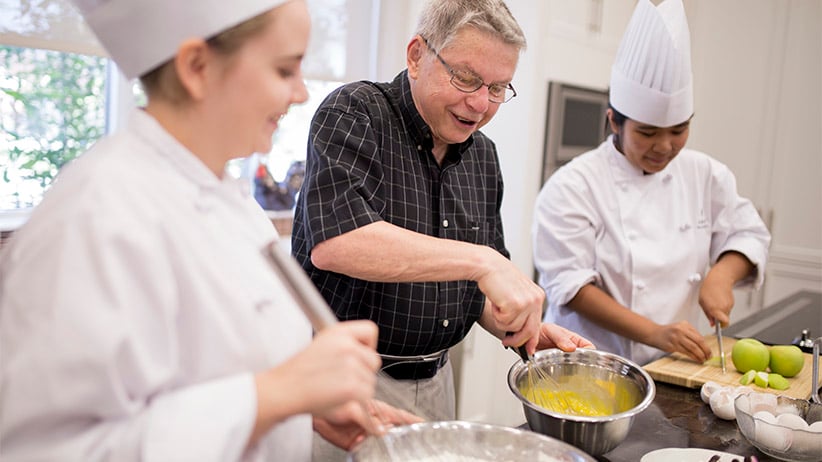 Cooking-school grads often don’t last long in restaurants. The low wages (frequently below the legal minimum) and long hours (frequently beyond the legal maximum, without overtime pay) leave them exhausted and frustrated. But there is career gold to be mined—good wages and beneﬁts—in long-term care and seniors’ residences.

Baby Boomers, the generation that won’t stop telling you how they once saw the Doors open for Simon and Garfunkel, continue to shape our culture, this time by demanding cocktails at 5 p.m. and crème brûlée for dessert.

“It’s a lucrative ﬁeld,” says Christine Walker, chair of George Brown Chef School in Toronto. “The Baby Boomers don’t want to eat mush. They want to eat food that tastes good. Because they’re educated. And they have money.”

Long-term care facilities are on the rise. Between 2000 and 2010, there was a 20 per cent increase in Canadians living in homes for the aged. We’re at the dawn of a retirement home boom. You’d better believe the generation that ended a war in Vietnam and changed the ﬂavour of Coke will have something to say about their chocolate pudding.

And their main dishes.“You’re seeing a lot more curries and Asian dishes,” says Gary McBlain, regional director of culinary services for BayBridge Senior Living, in Toronto. “They’re looking for food to be healthier. They want to know where it’s coming from, that it’s ethically sourced.”

He’s getting questions from residents about vegan menus and medical marijuana. But the biggest changes are to overall quality. McBlain has been in the business 16 years. In the last decade, he’s seen a growth in retirement homes, and along with it, competition to offer better services. “People are gearing up for the Baby Boomers coming in 2020,” he says. “They’re going to be in their early ’80s, and we’re expecting occupancy to go up.

“The residents are a lot more afﬂuent. With more competition coming on stream, the best way to ﬁll up is to offer fantastic food and be ﬂexible.”

Menus used to be designed by dietitians. It was typical to have one dining time, with pre-made food coming out of a box—from an industrial service—to be heated and served. Now there are à la carte menus and scratch cooking, with kitchen staff reporting to restaurant-trained chefs.

“The business is getting way more sophisticated,” says Eric Wood, a former chef and now recruiter for JRoss Hospitality Recruiters, at the Toronto ofﬁce.  “The calibre of the chef candidates we are being asked to ﬁnd for these roles has shifted from having institutional backgrounds to being luxury-hotel trained chefs.”

Cooks at BayBridge start at around $19 an hour, as opposed to the $12 to $14 they’d get in a restaurant. But it’s an even better path later in a chef’s career, when they have ﬁve to 10 years’ experience.

“Retirement homes are a good second or third act for a lot of chefs,” says Wood. “Red Seal [certiﬁcation] is usually a must, and not negotiable. Accounting and base business skills are going to be valuable. Five years of real volume management experience would be the true vector. Coming from a 30-seat resto with good Instagram doesn’t cut it.”

Depending on the size of a facility, a chef could make between $53,000 and $75,000 running a kitchen in a retirement home. That’s compared to the $40,000 to $50,000 a restaurant chef is likely to make after 10 years. More importantly, the corporate environment means 40-hour weeks with beneﬁts, as opposed to 60 to 80 hours without. So it’s suited to a chef who’s ready to have a home/family life.

Young cooks don’t usually care about job factors like security, beneﬁts or reasonable hours, because restaurants are sexy and provide an adrenaline rush. But after ﬁve to 10 years on the line, with no savings and no time for family, they are going to want more.