There's no such thing as a straight career path anymore

Career paths are not a straight line and, as experts will remind you, ‘no career decision is fatal’ 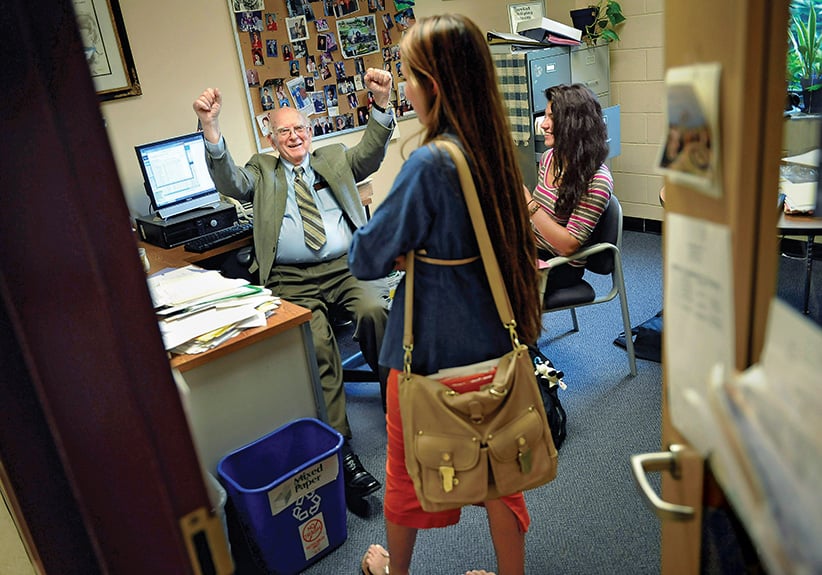 Clare Sully-Stendahl is barely old enough to vote, at 18, but the first-year university student has been making career choices for years. “I’ve always liked the humanities and the sciences,” she says from her dorm room in Halifax. “But in high school, there was pressure to pick one over the other.”

Instead of opting for theatre or film studies classes, Sully-Stendahl decided to be strategic and chose a second science while still in high school. But, “physics and I didn’t really get along very well. There’s no way I would continue with that in a career. I chose it because I knew a lot of universities require physics for engineering, medicine, a lot of sciences . . . ”

She’s not hell-bent on those fields, but like many people her age, Sully-Stendahl felt she had to keep those in-demand, potentially high-paying options open. When it came time to decide which university offer to accept, however, Sully-Stendahl opted for a general arts degree.

The Foundation Year Program at the University of King’s College will immerse her in the arts she loves with small-group tutorials, reading and debating ancient and modern literature. “I still don’t know what I want to do as a career,” she says. “I’m entering this university phase of life thinking I’ll take it a year at a time.” While that flies in the face of common advice, it’s a smart move.

Despite three years of classes that may have exposed them to computer skills and finite math, to world issues or a foreign language, most high school students face their final year without the training they need to make career choices. “Career development is seen as the poor cousin of the real curriculum,” says Donnalee Bell of the Ottawa-based Canadian Career Development Foundation. Students don’t usually confront the issue until it’s time to choose post-secondary programs, short-list schools, and submit applications, so it feels like they have to get it right, right now. But “no career decision is fatal,” says Bell. “Over the course of your lifetime, you’re going to make many, and none of them are wrong. Youth are so stressed out and concerned about their career future. We need to pull that off a bit.”

Some would argue more than a bit.

“It’s crazy. You think you have so much time to plan your life and plan a career you want, but honestly, Grade 12 just smacked me in the face,” says 17-year-old Kim Shaw. She’s quit her part-time job to focus on studies. “You want to get 80 per cent or higher so it looks good on applications and you’re eligible for scholarships,” she says. 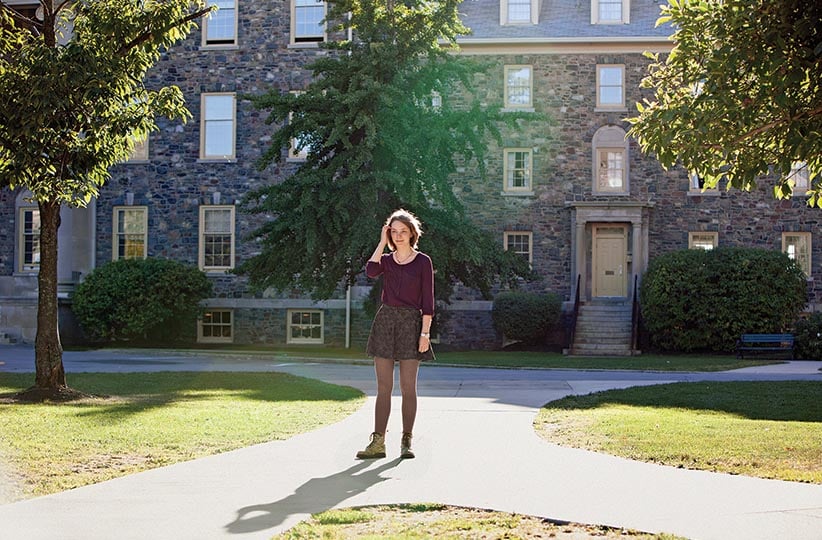 Clare Sully-Stendahl on campus at the University of King’s College in Halifax, Nova Scotia, September 25, 2015. (Photograph by Kayla Chobotiuk)

Money is a big part of student stress. Shaw entered a joint program between Assiniboine Community College in Brandon, Man., and her high school in nearby Birtle. This fall she’ll add a college-level health care aide class to her high school timetable, one period a day; in the winter, she’ll forgo regular classes and study only the health care aide course. At the end of the year, she’ll be qualified to work as a health care aide right away, so that if she decides to continue at post-secondary, this will help her pay for it. “I don’t want to have any debt when I come out of school.” Clearly practical, Shaw calls herself an “indecisive person” (until a few months ago she wanted to be a lab technician, and she hasn’t ruled out becoming a teacher . . . ). But she isn’t indecisive; she’s just young.

Despite the fact that, give or take, we’ll have 12 careers over our lifetime, the majority of us won’t settle on that first career until we’re 25. According to Statistics Canada’s Youth In Transitions Survey, less than seven per cent of 25-year-olds had the same career expectations they did as 17-year-olds. That’s not flip-flopping, it’s learning.

That doesn’t make it easier for Shaw, though. “You go to school for this one career, and then you’ll be stuck with it for the rest of your life, thinking you have to do it for 50 or 60 years,” she says. “It’s terrifying.”

The thought of becoming a statistic is part of the fear. No one wants that. You want a career that’s lucrative and brings bragging rights, but you’re being bombarded—from news reports, teachers, and family, all telling you the best way to make that happen. That can cause high school students to shut down.

“They have a real sense of disengagement, and at the same time feel this pressure to go to university,” says Adriano Magnifico, an English teacher and divisional consultant at Nelson Mack High School in Winnipeg. “I was just talking to a former student who is in the completely wrong university program. When I asked her why she did it, she said, ‘My parents have saved for this for years and I didn’t want to let them down.’ ”

The problem is that with youth unemployment nearly double the national average, and post-secondary grads entering the work force with crippling student debt, the stress is on to choose a program that will immediately lead to sustainable work in a growing industry. Where is that? Everyone thinks they have a crystal ball—Choose STEM! Run from the arts! Master a trade!—but no one does. “There was a time when IT was huge and there were all kinds of early offers going to students even before they graduated,” says Robert Shea, associate VP, academic and student affairs, at the marine institute of Memorial University in Newfoundland. “That has dissipated now, and there are a lot of unhappy IT people.”

Today a teaching degree is considered a waste of time and money, because we have more teachers than we can employ in the public system. “But what if they went and became a youth worker or a counsellor?” asks Shea, who has an undergraduate degree in social work and has never been employed as a social worker. “Sometimes we put kids in boxes: if you have a degree in this, then you must do this,” he says.

The way to find a lasting career—the goal of all post-secondary—is “knowing yourself,” says Shea. Not only can that be done at any type of institution, it can be done in any program.

School tracks aren’t linear as they were a generation ago. Even medical schools don’t always require an undergraduate degree in a pure science. “People with degrees in music get accepted to medical school,” says Shea. Not all of you want to go into medicine, but the point is this: choose something you love and get good at it. How? “Focus on competencies, not credentials,” says Shea, who has taught university-level business courses. (“Invariably students will ask me, ‘Where did you get your M.B.A.?’ but I don’t have one.”)

Acquiring targeted skills well after graduation is common, and a general arts degree can set you up for that. “Arts grads are analyzers, they’re thinkers,” says Magnifico. “These are major 21st-century skills.” Yet the cliché of the philosophy-major barista persists. “Universities have got to start letting their students know that when you finish a particular program, these are the skills you’ll have and here’s who values these skills. When they do that, watch arts take off,” says Magnifico. That’s the goal of the Career Integrated Learning Project that Shea started at Memorial in 2010 (see sidebar).

If you find yourself fielding the question “but what will you do with that degree?” Shea wants students to know they have options. “I don’t thumb my nose at any education,” he says. He also wants them to know they have time. “My daughter is starting her first year at Memorial this fall,” he says. “She has no idea what she wants to do with her life and I think that’s brilliant.”

Thinking outside the box

While college programs have always been set up with the job hunt in mind, other levels of schooling are setting a new standard for career-integrated learning.

Offered through the English program, Grade 9 and 10 students attend skill-building retreats and start networking with local businesses. Students in Grade 11 get job-shadowing experience and Grade 12s add in business-plan writing and logistics-management instruction.

After establishing the program at Windsor Park Collegiate, Adriano Magnifico has expanded it to another institution, Nelson McIntyre High School.

Nearly 60 academies, junior- and high schools offer hands-on learning through “O2.” The program focuses on kids who aren’t performing well, but provides work readiness that experts say all students should be immersed in.

All Nova Scotia students start a work/life portfolio in Grade 7 and develop it until graduation. It’s a personal plan that must include a resumé and career explorations, as well as debriefing of job-shadowing and co-op placements.

Robert Shea proposed the program in 2010, because, as the associate VP of academic and student affairs at the school’s marine institute, he saw that kids in general, and those in arts programs especially, were struggling with “career indecisiveness.” There had to be a way to translate skills learned from arts classes into “career competencies” that would be recognized by employers. There is: by working with faculty to revise all course syllabi to include specific, marketable skills. Prospective students can see at a glance what skills they will have upon completion. “We’re talking interpersonal, leadership and presentation skills that are highly valuable,” says Shea.

UR Guarantee Program, University of Regina

The career services department offers resumé building, interviewing skills and targeted workshops, along with aptitude testing. The selling point is the guarantee: Students who follow the program and don’t land career-related work within six months of graduating can come back for another year—for free. U of R is the first Canadian school to make this offer. “In Europe, guarantee programs are on the rise,” says Krista Benes, consultant at the Canadian Career Development Foundation. “In Denmark, for example, no young person graduates without a guarantee of finding degree-related work. In Canada, U Regina is leading-edge.”