University of Regina, U of T Mississauga defend spending 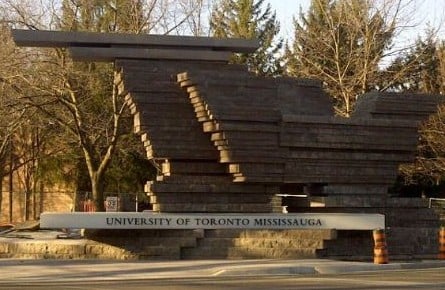 Students make a lot of noise about tuition costs but are less vocal about university spending, aside from occasionally blasting administrator salaries. (At McGill, for example, the big news this week was president Suzanne Fortier’s salary: $390,000 plus a potential 20 per cent bonus.)

The UTM Student Union posted a photo of the school’s massive new stone entrance-way on its Facebook page and asked, “how much do you think the UTM signage on Mississauga Road costs?” The answer: $998,000. More than 80 shared the post. Student Ju Li expressed outrage to The Medium newspaper: “The fact that University of Toronto, a public institution, splurged $1 million on a vanity project is rather outrageous.”

This week, the University of Regina broke ground on a new entrance-way comprising six-foot-high stainless steel letters spelling out the school’s name, a new sidewalk and landscaping. The price: $950,000. The Carillon student newspaper asked students how they felt and got lots of responses.

@the_carillon The old ones are perfectly fine. There are more important things than fancy new signage. #uofr

@the_carillon seems acceptable. #sarcastictweet It’s not like that money can go toward more parking spots or something that’s important!!!

Graham Reid, a second-year U of R student who Tweeted about the sign, says the money would be better spent on other things, like parking, which students have long said is inadequate.

Dave Button, a U of R vice-president, told the Leader-Post the sign is part of the capital budget so it doesn’t impact tuition, staff or faculty. “People will always have different priorities,” he said, “[But] these projects I consider are for the public good.” He also said they went with the lowest bidder.

Paul Donoghue, UTM’s chief administrative officer, defends his campus’ $998,000 entrance way project. He says it pays homage to the school’s history by using local stone, and to John Tuzo Wilson, a geophysicist and geologist who advanced plate tectonics theory and was the second principal of what is now UTM. Although he couldn’t give a breakdown, he says the figure includes the cost to remove the old sign, fix a retaining wall, landscaping, new sidewalks, lighting and more.

“The old entrance was something you could drive by and wouldn’t even notice,” he says.