10 stories students are talking about today 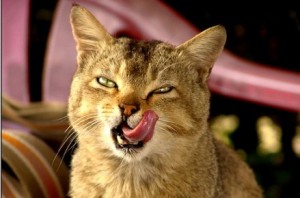 Here we give you the 10 stories that Canadian students are talking about today. Like us on Facebook for your daily fix.

1. Nearly one in three U.S. cats is a stone-cold killer, according to the University of Georgia, which spied on more than 60 felines with video cameras. Their favorite victims are lizards, snakes and frogs, followed by small mammals (poor chipmunks!), insects and worms (uh, gross), and finally, birds. Considering the gravity of this news, is it too soon to ask if claw control is the answer?

2. Britain’s Andy Murray, the guy who beat Federer for Olympic Gold on Sunday, flattened Italy’s Flavio Cipolla Wednesday at the Rogers Cup in Toronto. Tonight he takes on local boy Milos Raonic, who beat Murray four months ago. As Canadians, we have to cheer for Raonic, right?

3. Finding an apartment in Vancouver is so difficult that students are living in cars. “I’m going to try living in my van as long as I can,” says Anna Baignoche, a University of British Columbia master’s student. Let’s hope her master’s isn’t in arts or she may end up in that van longer than expected.

4. Remember the University of Waterloo engineering student whose racy bikini shot got her classmates booted from their design centre? Cassandra Cole says she “hit rock bottom” after the controversy and was too distraught to study. But she’s over it! She’s even done more modelling.

5. You know you’re being watched right now, right? Chris Sorensen, in this week’s Maclean’s, looked at how companies are tracking your finances, health, race and more, every time you go online. Some say you’re getting a more personalized Internet experience. Others say “cah-reepy.”

6. Gabriel Nadeau-Dubois, the face and (occasionally shrill) voice of Quebec’s more militant anti-tuition group, CLASSE, is stepping down. Unlike Léo Bureau-Blouin, his evil twin from the less-militant college student association FECQ, he will not run for the Parti Québécois.

7. In Chile, students demanding free education set three city buses on fire. Chile’s government says student leaders must take responsibility for the incident. Sound familiar? Actually, Chile is a much tougher place to be a student than Quebec. They pay up to 80 per cent of the cost of their educations (in Quebec it’s 13 per cent), and who could say no to the beautiful Camila Vallejo?

8. Students in Nova Scotia won’t have any buses to burn, even if they want to this fall. Acadian, the local coach line, will halt regular service to much of the province in November. John Morgan, mayor of Cape Breton Regional Municipality, blamed “a neo-conservative attitude” for the cut. It’s also worth noting that Acadian lost $7 million and couldn’t get an agreement with its union.

10. It’ll be interesting to see what effect 50 Shades of Gray has on the pronoun tally. It has now wiped Harry Potter from the record books to become Britain’s best-selling book of all time.