A $120k salary, a cheating professor & Jackasses at UBC

What students are talking about today (January 9th) 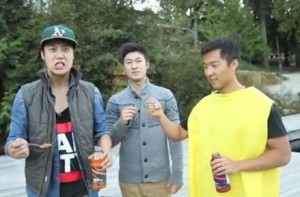 1. A student newspaper blog has taken a swipe at a video parody of the MTV stunt show Jackass made by the University of British Columbia’s Chinese Varsity Club.”It’s mostly some dudes standing on a dock performing tame hijinks. Cinnamon eating! Purple Nerples! Syrup chugging! HILARIOUS. (The part where they shoot bare asses with a B.B. gun is a little less tame, I guess.),” wrote Andrew Bates of The Ubyssey. That might be a little unfair to these guys, who are trying hard to walk the fine line between funny and irresponsible. Then again, they deserve any criticism they get after uploading it to YouTube.

2. Sam Minniti, executive director of the McMaster Association of Part-time Students, was paid $126,151 in 2011, according to the provincial public salary disclosure list. (McMaster University included him on their submission to the Ontario government because they process his pay). The Hamilton Spectator newspaper notes that many of his counterparts are paid much less. Sandy Hudson, executive director at the much larger University of Toronto’s student union, told The Spectator she makes “less than half” as much. The university has withheld part-time student fees this year while it looks into MAPS more closely.

3. Kayla Bourque, a former Simon Fraser University student and convicted animal torturer, has been released from jail and B.C. Corrections is warning the public about her disturbing past. Bourque told police that she planned to kill before she turned 40 with the “the primary target being someone under the age of 14 as such a person would be easy to overpower,” according to an RCMP report quoted in The Province. Bourque was released from jail Monday after serving time for killing her family pets. She told classmates that she used to squish frogs to hear them scream and that she decapitated a neighbours’ cat as a child. It’s worth noting that Luka Rocco Magnotta, the man accused of killing Concordia University student Jun Lin, also tortured animals.

4. Dwight Orchard, a 23-year-old George Brown College student in Toronto, saved a man who tumbled onto a subway platform on Tuesday afternoon as the sound of the train was filling the station. Orchard told The Toronto Star he lifted the man “like a baby,” before pulling himself off the track bed. Power was cut to the station, but about three cars had entered before the train stopped.

5. The University of Waterloo has suspended a professor for four months without pay as punishment for plagiarism. Engineering professor Dongqing Li apologized in a statement released from the university. “I am very sorry for the plagiarism contained in the review paper,” he said. “I take responsibility for this mistake, and for my delayed action in withdrawing the paper when I learned of the plagiarism,” he added. Li holds a $200,000 Canada Research Chairmanship.