On the legacy of race researcher Philippe Rushton 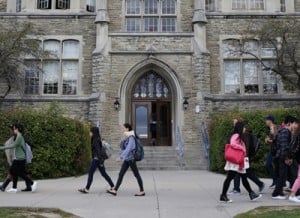 Over the past couple of weeks, academics were discussing the death of Western University’s Phillipe Rushton, a professor perhaps not familiar to many of today’s students, but who was, for a little while, among the most hated men in Canada.

Until the late 1980s Rushton had been a reasonably well-respected psychologist whose work on altruism was frequently cited. But then, he published a series of papers claiming that the three main human racial groups—whites, blacks, and Asians—could be grouped according to a wide range of racial traits, including intelligence and various sexual characteristics, with whites typically falling between blacks and Asians.

Not surprisingly, many took Rushton’s theories as thinly-veiled, or, indeed, not-at-all-veiled racism. They saw his essential claim as being that blacks were inherently inferior to whites, and many called for the psychologist’s resignation. At one point, Rushton was required to teach his courses by video to prevent on-campus unrest.

The years since then did little to rehabilitate Rushton’s reputation. I heard one Western prof lament a few years ago that every time she went to a conference, people still asked about Rushton. Salon’s recent notice of Rushton’s death put the word “scientist” in scare quotes—beating, I’m sure they thought, a dead louse.

My memories of the years of the Rushton controversy—and of the man himself—are a bit more complex. I was in my final year of high school when the controversy erupted, and I when I went to Western as an undergraduate, it had become positively riotous. The atmosphere was charged, and while, I must stress, I did not think then, nor do I think now that there is any point to judging individuals by their racial ancestry, my time amid the Rushton controversy did teach me a lot about the importance of academic freedom.

Immediately, I was troubled by the atmosphere around the debate, for, frequently, it was barely a debate at all. Indeed, it often devolved into little more than shouting matches—or would have if Rushton had been shouting back. I recall people saying quite seriously that Rushton’s words were as bad or worse than physical violence, that his rights to free speech did not extend to the “slander” of millions of people, or that, if it did, Western was not bound to give him a “platform” for his hateful views. Tempers flared at public meetings. At one point, as I recall, Rushton’s office was vandalized. In the ugliest instance, Rushton was so terrified of protestors who confronted him on campus that he panicked, thought he was having a heart attack, and was taken to the hospital. A few protesters later grumbled that the whole thing was an act.

At the time, though I was still new to academics, it seemed to me that the matter of whether Rushton’s work had scientific value was a matter for psychologists and other experts to debate. It wasn’t for non-experts to judge whether his research stood up to the standards of his discipline. Nobody seemed to be combing through anyone else’s writings so vigourously. And it certainly wasn’t for the Premier of the province to denounce Rushton’s work as an offense to right thinking Ontarians. As a lifelong resident of Ontario, I was pretty sure I was free to think as I saw fit.

For these reasons I joined the very small group of students—come to think of it, it might have been just me and one other guy— who tried to rally a counter-protest in the name of intellectual freedom. Not because I thought Rushton was right, I emphasize again, but because I thought, at the very least, he had the right to be wrong.

Rushton’s real motivations for his work may have died with him. He might have honestly thought he was following in the footsteps of the many great scientists who dared to point out the truth despite an orthodoxy determined to silence them.  Then again, perhaps he was, at heart, a racist driven by prejudice to create junk-science which could defend his own intolerance. He might have been, in the privacy of his own mind, the monster some made him out to be.

Since then I have read enough psychology and anthropology to be convinced (as any non-expert might be) that his science had little foundation (and so far as I know most scientists agree).

Still, whatever Rushton’s personal motivations, I feel compelled to note that every time I can recall seeing him in person, he behaved in a dignifed manner—more dignified by far than many of his detractors.

Moreover, he always seemed ready to debate his claims. Indeed, he did debate them against geneticist and media personality David Suzuki in a public, televised tete-a-tete. I watched the debate on TV, and I recall Rushton seeming odd but enthusiastically scientific (“Do the experiments yourself!” I remember him crowing amid the crowd’s derisive laughter. “Measure the heads of your friends! Try to relate it to the grades they get!”) while Suzuki grimly stuck to the point that correlation did not necessarily mean causation.  Yellowed fingers don’t cause lung cancer, he quite rightly pointed out, any more than dark skin causes lower SAT scores.

In the long run, the Rushton case at least showed the value of tenure in Canadian universities in protecting academic freedom. The main reason for tenure is that professors should be free to research as they see fit without fear of being fired for taking up questions or coming to conclusions that the authorities find unacceptable.

The price we pay for such protections is that sometimes we protect research whose findings may be dubious and professors whose motives may be suspect. Rushton may have been a bad man with bad ideas, but letting him teach and publish didn’t make Canada a nation of racists, whatever platform he had. Indeed, if anything Rushton’s prominence provided a convenient target for others to show why his brand of race science didn’t make sense.

He came. He was wrong. He’s gone. The next time this happens, maybe we can all try not to panic?