A look inside gamers' clubs on campus

Why study when you can kill goblins? 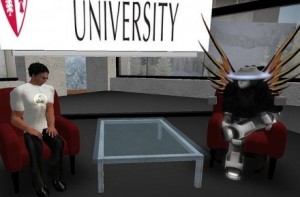 A few months ago, I was having dinner with a group of colleagues from a hiring committee, including the student representative. This student happened to be one I know fairly well. At one point during the meal she looked at me a little bashfully and said, “You know there’s something I’ve been meaning to ask you for a while.” It made me nervous. I could tell something personal was coming.

“What kind of character do you play in D&D?” she asked. It turned out she had just started playing and had learned that I played in a game with other faculty members, so she became curious (answer at the time: Gnomish Paladin; answer now: Half-Orc Monk; oh, and, strictly speaking, its Pathfinder, not D&D).

Gaming of various sorts—board, video, role-playing—seems to have always been popular on campus. I remember hearing about gaming groups at the University of Waterloo when I was still in high school. It’s not surprising, given the number of nerds (I use the term affectionately) who tend to end up in higher education—including advanced nerds like me who end up in the faculty. Indeed, a quick survey of university websites finds gaming groups across the country. At the University of Victoria it’s merged with “tech.” Clubs are active at the University of Guelph and Trent too. Not surprisingly, given the imaginations of game enthusiasts, some clubs play games with their names. The Club at the University Regina—the Gaming Fellowship—gives a nod to Tolkien. Others revel in playful acronyms like the Association of Ryerson Role-Players and Gamers (ARRG!).

East coast schools seem to be eager to get a seat at the table, too. The University of Prince Edward Island has a new gaming society. According to student newspaper The Cadre, the group struggled to find the minimum 15 members required for official status, but has since doubled that number. Meetings are informal show-up-and-play sessions where any game goes. “If you wanna come and play Monopoly, go for it,” said Vanessa MacArthur, the group’s founder.

Meanwhile, the new Cape Breton University Gaming Society (CBUGS, pronounced like “Sea Bugs”) boasts nearly 40 members. The primary aim of the groups, says president Matt Boyd, is simple: to share the love of gaming. By sharing resources, gaming can be a cost-effective pastime.

As for me, gaming with students somehow feels like crossing a line. There are parts of a prof’s life that he likes to keep to himself. My pride in owning a five-sided die is one of those things.