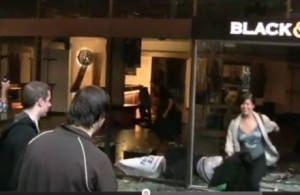 The University of British Columbia student who is referenced in a lengthy online apology for her role in the Stanley Cup Riot was charged Monday.

This post, dated four days post-riot, apologizes to Burrard Acura, the Enspire Foundation and the UBC Rowing team for the actions of 21-year-old student Camille Cacino, who is now charged.

“The pants are being returned. I have made mistakes and I have learned from them,” reads the post. “I take full responsibility for my actions and understand that it is nobody else’s fault but mine.”

This video appears to show Cacino smiling as she and other rioters flee through a smashed store window with what appears to be stolen clothing.

Dustin Anderson of Burnaby, 21, was also charged Monday with taking part in a riot and assault.

In October, Vancouver Police Chief Jim Chu suggested that 15,000 possible criminal acts had been identified in videos and photos of the riot that followed the Canucks’ loss to the Boston Bruins on June 15. Chu said that he anticipated 500 to 700 people may eventually be charged.

But progress has been slow. As of Dec. 19, the VPD had recommended that 80 individuals be charged with 215 crimes. So far, the crown has approved just 77  charges against 30 people.

The VPD maintains a website of security video footage of possible rioters here.