Archery is easy. Except when it's not.

The perfect extracurricular activity for Legolas-wannabes

Back in high school, if you lacked any kind of athletic ability (like me) there weren’t many extracurricular options beyond the science and chess club. But at the University of Waterloo, there are 160 student clubs and associations.

Including a LEGO, rock climbing, and cheese club. Plus the People Who Think The Second Matrix Movie Wasn’t All That Bad club.

Last month I signed up for the University of Waterloo Archery Club. After lightsabers and boomerangs, a bow and arrow is the universally recognized coolest weapon on the planet. Ever.

I couldn’t believe my luck. A club that’s all about bow and arrows. And shooting them.

It’s the kind of club that could never be offered in high school. It’s scary enough to think of your grade 10 English class getting driver’s licenses. Let alone handling the same weapon as Legolas.

Everyone who showed up got to shoot three arrows. A kind of trial-run before committing the $20 membership fee. As I quickly learned that first day, the most difficult part about shooting an arrow isn’t… well… shooting the arrow. It’s putting the finger tab on.

The finger tab is a leather glove-thingy that protects your fingers. Or maybe it’s just a way to make your fingers look cool. You know, the Michael Jackson look of the medieval-weapons world.

The instructor told everybody that putting it on is simple. Then proceeded to show us the Ten-Step Finger Tab Usage Procedure. “You slide it over your hand, tuck it under your thumb, wrap it around your finger, point your right foot towards the north and your left elbow towards the east, and alphabetically list every character from Lost. And then connect the velcro straps.”

I knew there would be a bit of a learning curve to overcome. Which meant my first practice shot would probably smack somewhere at the edge of the target. But by the time I fired my third practice shot, I would have the muscle memory and technique mastered. Never mind hitting the target dead-center. I would ricochet the arrow against the back wall of the gym, shave the wings off the mosquito that was buzzing around the ceiling, and then catch the arrow mid-air. With my teeth.

So did my second shot.

My arrows simply wouldn’t cooperate. I’d aim at the bulls-eye in the middle of the target, and my arrows would insist on hitting the back wall of the gym instead. Yeah, I had some seriously messed up arrows. 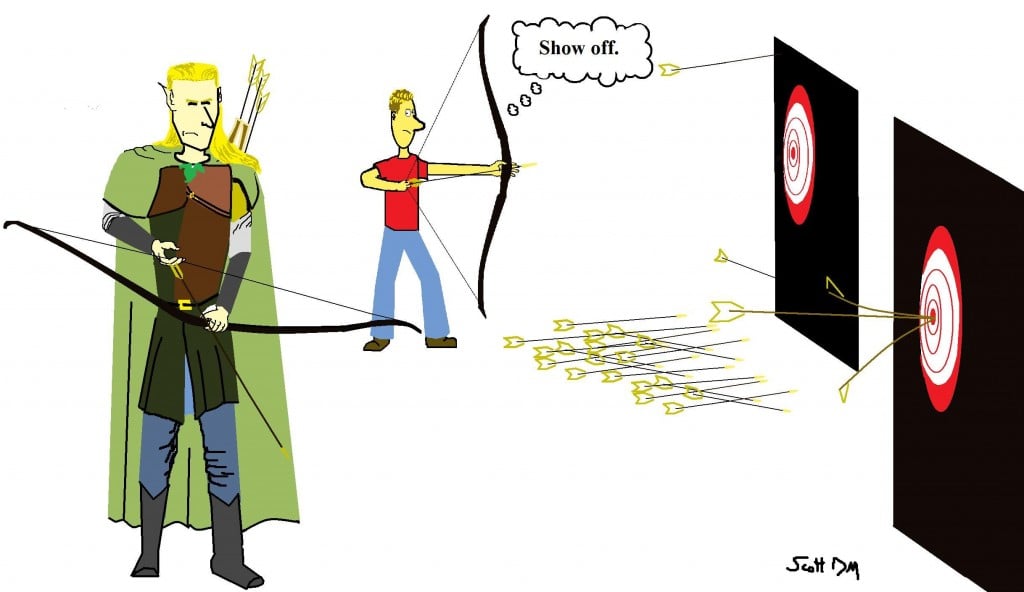