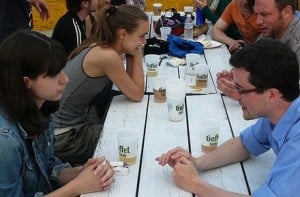 University students just aren’t what they used to be, it seems. James Lang, reviewing a book by Cathy Small in The Chronicle of Higher Education, sadly concedes that today’s students no longer engage in the big undergraduate discussions of the meaning of life, the sort of late-night, possibly pot-scented talks that he had when was he was young.  Indeed, he concludes, this new bunch of students no longer has “a curious and thriving intellectual life outside of their courses.”

Similarly, according to this U of T Dean, today’s young people no longer see a course as a chance to explore concepts and knowledge for their own sake, but merely as pragmatic means to Spartan ends. Then she hints that they may more boring too. “I sometimes wonder if people feel less curiosity now that they can just turn to Google,” Kelly Castle rhetorically asked in The Grid.

But a decades-long tradition at Cape Breton University proves that, at least in some places, there are still undergraduates ready to have serious conversations, about big issues, on their own time.

Welcome to the Philosophy Café, a semi-regular Friday afternoon gathering at CBU’s campus pub, The Pit. It began some 35 years ago as the Socratic Society and has gone by other names since. According to Philosophy professor Richard Keshen, it has gone dormant a few times, but it has always been revived. There are four or five per term now, and Keshen himself is leading next week’s discussion: “Should we all be vegetarians?”

Some sessions are led by students, some by professors, some by alumni (including an upcoming session on whether university education is worth the money), but they are all attended by a healthy mix of dozens of undergraduates, faculty, and members of the community. And while, as Keshen’s colleague Andrew Reynolds admits, the discussions rarely break new ground, philosophically speaking, it’s a chance for people to grapple with fundamental issues of religion, politics, ethics, to sit in a circle as equals and speak their minds.

Castle, the U of T Dean, has similar aims with the program she and her husband introduced six years ago. Ideas for the World, a series of discussion-based classes with neither marks nor credits, has been growing ever since. Castle seems to be trying to recreate a golden era of education that was somehow more philosophical: “I would have these long discussions with my professors about whether or not God existed,” she told The Grid. “I know it sounds trite, but I think these conversations are such an important part of education. You know, drinking a latte and debating existentialism.”

The continued popularity, indeed resurgence of such events, make me think that the rumours of the death of the big undergraduate conversation are greatly exaggerated. Certainly, for many undergrads, going to university is all about getting a credential. But was there ever a time when every student, or even most students, went to university only for the purest of motives? I doubt it.

Now, as then, I think, there is a special breed of students, a small minority, excited by ideas and eager to pursue them as far as they can. Some of these students will become professors themselves, and they will remember their conversations with other special students like themselves, and they will assume that everyone was like that in those days. And eventually they might end up writing books and articles grumbling about how university students just aren’t what they used to be.